Have you ever watched a movie and felt lost in the middle of it, having thoughts like 'who is that guy' or 'why did that woman just slap that guy in the face?' Wouldn't it be great if you could have someone with you to guide your reactions and fill in the plot gaps? Well, in Ancient Greek plays, the chorus did just that.

In the play Antigone, the chorus summarizes the action on stage, explains background information, and offers insight regarding conflicts and choices. Let's take a look at the role of the chorus and analyze how their interaction with the characters affects the outcome of the play. 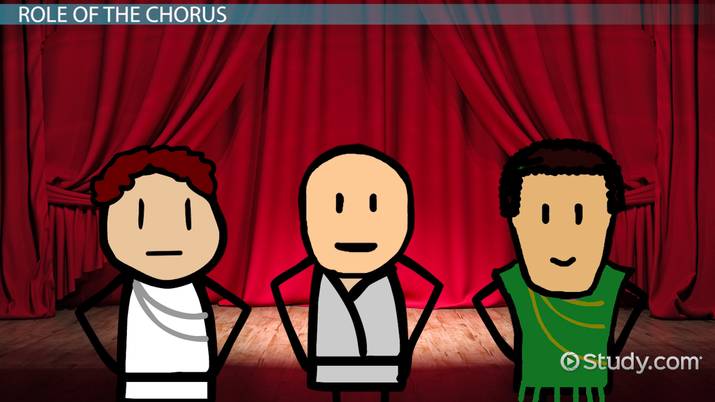 Coming up next: Teiresias in Antigone

Role of the Chorus

In Ancient Greek drama, the chorus was a group of actors that commented on the action happening in the play, offering their opinions and wisdom to aid the characters on stage and the members of the audience. The chorus has been known to dance, sing, and speak their minds to guide the audience's emotional reactions to the events occurring on stage. In Greek tragedies, the chorus represented the average citizen's fears, hopes, and judgments.

In the play Antigone by Sophocles, the chorus and chorus leader represent the people of Thebes who attempt to talk rationality into the main character, Antigone, and the king, Creon. Unfortunately, wisdom is found too late, and the 'I told you so' comes from this group at the end of the performance.

Function of the Chorus

Now, let's examine the different functions of the chorus. The first is foreshadowing. The chorus tells the audience hints and clues as to what will occur later in the play. In Antigone, the chorus foreshadows Antigone and Creon's downfall by singing about the 'mastery of man' and his limits. The chorus says man has conquered 'all but death,' which foreshadows what is in store for Antigone. They also sing of 'unsavory ambition,' or excessive pride, which foreshadows Creon's hamartia, or tragic flaw.

The second is background Information. The chorus provides the audience with background information that is not actualized in the play. After the Prologue, the chorus sings about Antigone's brothers who were killed during a battle for the throne and the joys of victory. This information gives the audience the background they need to understand Antigone and Creon's conflict and also shows how the people of Thebes are now relieved from pain, as this war caused terror in their homeland.

Next, the chorus provides odes and prayers. The chorus begins to chant to Dionysus and dance after Antigone is locked away in the vault preparing to hang herself. These prayers remind the audience to recognize Dionysus's presence, as the god himself is connected to the concept of transgression, which Antigone and Creon have committed at the outset of the play. After Scene 5, the chorus chants to the god, begging him to right the wrong of the city of Thebes and lift the curse caused by Antigone's family name and Creon's pride.

The chorus also shows wisdom and insight. The chorus, being the thoughts and feelings of the common man, would give their two cents regarding the decisions made by the characters on stage. Oftentimes the chorus would provide insight and wisdom for the main characters to think through before making a rash decision. This is just the case in this play, where the chorus ends up helping the tragic hero reflect and have a change of heart. Creon imprisons Antigone in a cave and refuses to listen to the oracle's prophecy. Only after talking to the chorus and Choragos does Creon begin to have a change of heart.

As for Antigone, the chorus walks with her to the cave she will be locked in. While they pity her and agree her actions were just, the chorus reminds the young lady that she alone chose her fate and that her father's curse cut her down in her pursuit of justice. After Scene 4, the chorus tries to comfort Antigone by singing tales of other women who were damned by the gods that relate to her situation, but remind Antigone that at the end of the day, death will come for us all.

Lastly, the chorus are the emotional responses. The chorus represents the people of Thebes who cannot believe that Antigone could be the one to break the law. They follow her emotional plight and feel deep sorrow regarding her death sentence and doomed relationship with Creon's son Haemon. The chorus laments the fate of Antigone and Haemon after Creon has it out with his son in Scene 3.

After Creon has Antigone and Ismene taken away, the chorus sings of the woes of Antigone's family and the curse of her father Oedipus. This ode is also a reminder that if one puts themselves above the gods, trouble will be waiting when they come back to reality, something the audience can relate to regarding the time period and culture in which the play was written.

In Antigone, the chorus fulfills all of the tasks listed. The chorus and Choragos make Creon reflect on his choices and acknowledge his tragic flaw. Even though the wisdom gets through to him when it's too late, the chorus urges Creon to undo the wrongs he committed and gives the 'I told you so' line as Creon returns to his palace with his son dead in his arms.

While we, the audience, agree with the chorus, I'm sure Creon didn't like hearing 'I told you so' at the end of the play as his niece, son, and wife all lie dead, the lives taken by their own hands. In any case, the chorus does its job of guiding the audience through the play by foreshadowing future events, explaining background information, and interacting with the characters to provide insight and wisdom for all involved.