Gregor Mendel was a monk who studied pea plants in the 1800s, using his observations of phenotypes, such as the color of a pea, to create two laws that are fundamental to what we know about genetics today. Almost everyone has heard of Mendel and his infamous pea plants.

Maybe just as infamous is the fact that your head of curls didn't come out of nowhere. Your mom or dad likely shares the same need for extra conditioner and a little extra love on a humid day. But just where are those genes that are responsible for green peas and curly hair?

You'll remember that Mendel's first law is the law of segregation, which states that the alleles of a given locus segregate into separate gametes. Simply stated, a gene can have different alleles, or variants. However, each gamete only gets one allele of each gene.

Mendel's second law is the law of independent assortment, which states that the alleles of one gene sort into gametes independently of the alleles of another gene. They are usually independent events, like the probability of flipping a coin and landing heads twice in a row.

Mendel figured out that there were traits that could be inherited from one generation to the next. Now you know where you got that head of crazy curly hair. Today, we can fill volumes of books and thousands of Wikipedia pages on our genetic knowledge and even exceptions that stem from these laws.

However, back then, this was it. And it would take another century before scientists could begin to explain what Mendel proposed and before someone could tell you a little bit more about the genetics behind the head of hair you share with a parent and just why only a few of you in the family are lucky enough to sport these ringlets. 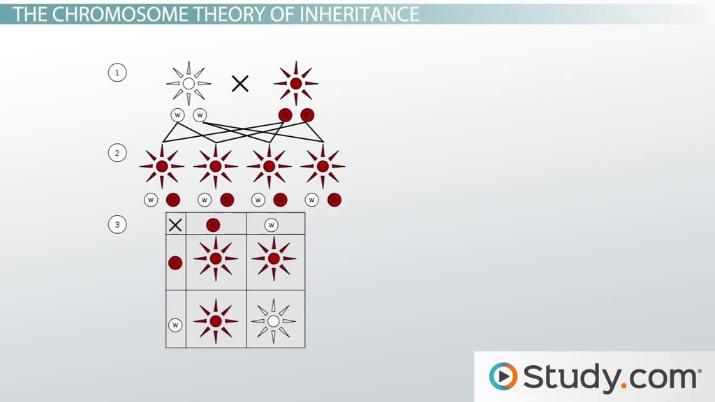 Coming up next: Parts of a Chromosome & Their Roles

The Chromosome Theory of Inheritance

See, Mendel's laws were based on the observation that alleles of genes segregate into gametes and that alleles of different genes sort independently. This was all done by just observing the traits of pea plants, without any molecular biology. He noticed that pea plants could pass on traits like yellow or green pea color, but that these traits were independent of other traits, like round or wrinkled pea plant seeds.

That was an incredible idea, especially considering no one really knew what a gene was. Further, no one really knew where genes were. He didn't actually know where genes were located in a cell or why his laws worked with his pea plants. Importantly, the chromosome theory of inheritance explained that the genetic material in living organisms could be found within chromosomes.

Boveri used sea urchin eggs and Sutton used grasshopper cells to make some important observations about chromosomes, the DNA and protein structures within eukaryotic nuclei. Together, their research helped to show the following points:

By recognizing that chromosomes might contain genes and that they are inherited by offspring, Boveri and Sutton's research supported that chromosomes were the missing link between Mendel's laws and molecular biology.

Alleles of genes segregate during meiosis and chromosomes sort independently. Still, it was going to take a few more years before the scientific community accepted the significance of the chromosome theory of inheritance.

In this lesson, we learned about the chromosome theory of inheritance , otherwise known as the Boveri and Sutton chromosome theory. It supported Mendel's laws, explaining the molecular basis of his observations. Importantly, it explained that the genetic material in living organisms could be found within chromosomes.

Absorb the information in this lesson so that you can: