Everyone has thoughts and beliefs. But how do those thoughts affect your mental health? In this lesson, we'll seek an answer to that question in the cognitive model of abnormal psychology and look closer at the A-B-C theory of processing. Updated: 02/01/2020
Create an account

Ashley is depressed. Her boyfriend cheated on her with her best friend. She keeps thinking that maybe if she'd just been a bit more adventurous and outgoing, like her former best friend, then he'd have liked her. She tells herself that it's all her fault he cheated. She cries a lot, and sometimes she can't even get out of bed.

Depression is one type of psychological disorder that's studied in abnormal psychology. Psychologists ask two questions when they are studying abnormality:

There are many answers to those questions and many different approaches to abnormal psychology. One psychologist might look at Ashley and say that she has a chemical imbalance in her brain and that she needs to be given medication.

Another might say that Ashley is depressed because her boyfriend's betrayal reminds her of a troubled time in her childhood and that talking about her childhood and her relationship with her boyfriend will help heal her. Let's look closer at one of the ways to approach abnormal psychology: the cognitive model. 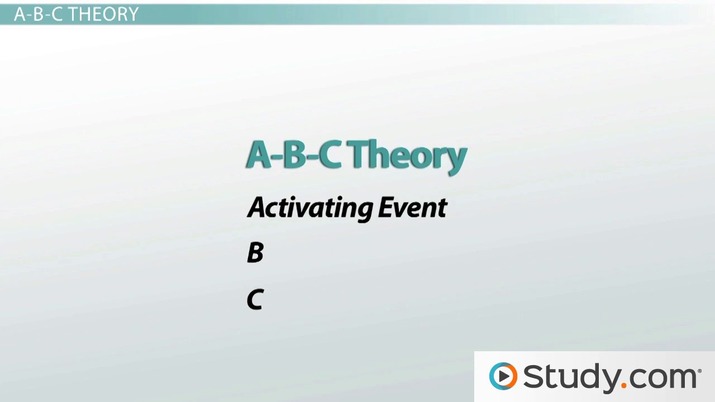 Coming up next: What is Cognition?

Ashley's depressed. We know that. But why? Is it because she has a chemical imbalance in her brain? Because she's survived a childhood trauma? Or is it something else? The cognitive model of abnormality says that psychological problems stem from a person's thoughts. The thoughts then cause feelings or behaviors that are not healthy.

According to the cognitive model, Ashley's depressed because of the thoughts she has about her boyfriend's cheating. She thinks it's her fault because she's not adventurous enough. Her depression is caused by this train of thought.

Now, you might be saying that it's not Ashley's thoughts but the fact that her boyfriend cheated that's causing her depression. But think about this: Many people have partners who cheat on them. They all react differently: Some get angry, some shrug it off and go on with their lives and some get depressed. What causes the different reactions?

The process by which people's thoughts affect their feelings and behaviors is sometimes referred to as the A-B-C theory of processing. It has three parts:

As you might guess, cognitive psychologists prefer to treat mental illness by changing the thought patterns of patients. If Ashley can be taught to think about her boyfriend's betrayal differently, then she might begin to feel better. As such, cognitive therapy focuses on attacking the belief part of the A-B-Cs. Without a time machine and a magic wand, a therapist can't change the activating event. He can't go back in time and make Ashley's boyfriend be faithful.

Changing the consequence of a belief can work short-term. For instance, a psychologist could try to treat Ashley's depression with drugs or other therapy that doesn't look at her thought patterns. But wouldn't it be better to attack the beliefs that are causing the consequence?

In cognitive therapy, the psychologist stages a rational intervention, which involves pointing out the irrational nature of a person's beliefs about his or her situation. A therapist might work with Ashley to make her see that her boyfriend's indiscretion wasn't her fault.

Then, the psychologist can help Ashley replace the old thought patterns with new, healthier ones. The focus might be on getting Ashley to believe that she's all right and that she can find a new partner who will respect and love her. Like other approaches to psychology, the cognitive model works better with some psychological issues than others. If a patient suffers from psychosis, for example, they aren't thinking rationally, and therefore a rational intervention wouldn't work.

The cognitive model of abnormality sees psychological issues as a problem with the thought processes of the patient. Cognitive therapists often talk about the A-B-C theory, whereby a patient reacts to an activating event with certain thoughts or beliefs that then lead to emotional or behavioral consequences. A cognitive therapist will focus on changing the thoughts and beliefs of a patient by staging a rational intervention to help them see why their thoughts are faulty and to replace them with healthier thought patterns.

After the completion of this lesson, you should be able to:

The Behavioral Model and Abnormal Functioning

The Sociocultural Model and Abnormal Functioning