The Cold War brought fear of both Communism and nuclear annihilation to the United States. Learn how this fear affected the daily lives of Americans and how it shaped American laws and policies. Updated: 09/01/2021
Create an account

The onset of the Cold War, which was a period of tension between the United States and the Soviet Union, drastically altered life for Americans. While the battle against communist subversion raged internationally throughout the 1940s and 1950s, the effects of the conflict were eventually felt on the home front. The Red Scare, which was the fear of communist subversion, caused Americans to reevaluate their daily interactions and beliefs. The possibility of nuclear annihilation also loomed after observing the tests of both nations' nuclear arsenals. As a result, a period of uncertainty and trepidation gripped millions of Americans. 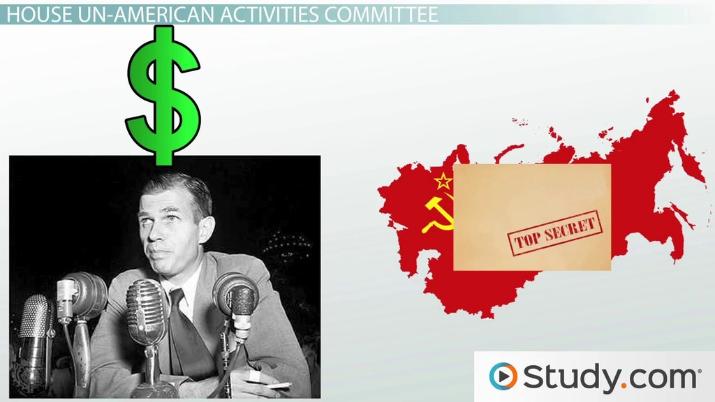 Coming up next: Dwight D. Eisenhower and the Cold War

Truman and the Origins of Fear

The fear of communism began with the commencement of President Harry Truman's Loyalty Program in 1947, which called for allegiance to the United States by federal employees under the penalty of immediate termination. Moreover, J. Edgar Hoover, Director of the Federal Bureau of Investigation, was given free rein to covertly investigate and detain anyone he suspected of being a national risk. Eventually, the Subversive Activities Control Board was created in 1950, which officially allowed authorities to investigate suspected communist-controlled organizations. This was only the beginning of the effects felt by the widespread battle against communism.

Truman's anti-communist rhetoric was first felt by labor unions, many of which had gained notoriety following the end of the Second World War. These organizations campaigned for higher wages and more power in the workplace, yet Truman viewed many of these individuals as militant supporters of communism, largely because of their post-war strikes. Even Congress became involved in stripping labor unions of their rights, which had been earned in previous decades. One aspect of the Taft-Hartley Act, passed by Congress in 1947, required labor unions to confirm that none of their leaders belonged to the Communist Party. Unions that were found guilty of an infraction lost federal protection.

The House Un-American Activities Committee, also known by its acronym HUAC, was a congressional entity developed in 1938 to seek out and eliminate suspected communist subversion within the United States. Two prominent, early Cold War cases developed during the organization's existence: the Hollywood investigations and the Alger Hiss trial.

HUAC believed that certain members of Hollywood, which included actors, actresses, writers and directors, were engaged in the Communist Party. As a result, HUAC opened investigations in 1947 into the alleged communist activity, and eventually tried and imprisoned the group known as the 'Hollywood Ten'. Additionally, HUAC created a Hollywood 'blacklist' which stigmatized those who were deemed to be supporters of communism. This action alone ruined the careers of many aspiring artists throughout the late 1940s and 1950s.

The case of Alger Hiss rose to national prominence during 1948. Hiss, who was charged with espionage and selling national security secrets to the Soviet Union during the 1930s, was tried and convicted only of perjury before Congress. The Hiss case proved to be the catalyst for future congressional hearings on communist activity, such as Senator Joseph McCarthy's witch hunts in the federal government.

In 1950, during a surge in the Cold War hysteria, Americans Julius and Ethel Rosenberg were accused of working in an international Soviet spy ring. The United States Justice Department promptly arrested and indicted the Rosenbergs on seditious activity, including espionage and illegally transferring national security data to communist conspirators, all of which is illegal under the Espionage Act of 1917. As a result, Julius and Ethel Rosenberg were found guilty in 1951 and eventually executed at Sing Sing Prison in 1953. The trial and subsequent execution was a byproduct of the burgeoning fear of communism in the United States.

Domestic preparedness for communist subversion, and even nuclear war, reached new heights during the Cold War. In 1951, Truman created the Federal Civil Defense Administration. The goal for creating the agency was to establish a civil defense system in the United States. The system was expected to prepare Americans for the possibility of a nuclear attack. Defense information bulletins were prepared on a routine basis, and underground bunkers and fallout shelters were erected across the nation.

The concept of 'Duck and Cover' was also adopted. The Federal Civil Defense Administration created the Duck and Cover film in order to show Americans the steps which needed to be taken in order to prepare for a nuclear attack. For example, if you were in school, you would take cover under your desk while covering the back of your head and neck. The civil defense programs typically propagated fear rather than pragmatism.

Many Americans turned to faith during the Cold War era. Communism was typically viewed by Americans as a godless entity that encouraged violence and fear throughout the world. A higher deity was one of the few protections individuals had from communism. Congress emphasized this point when it approved the motto, 'In God We Trust', to be stamped on American paper currency. Additionally, for the first time 'God' was inserted into the Pledge of Allegiance.

The Cold War developed a heightened fear of communism in America. President Truman's Loyalty Program encouraged federal employee allegiance toward the United States, while FBI Director J. Edgar Hoover sought out communist subversives. Labor Unions were under constant investigation for communist or anarchist activity. The House Un-American Activities Committee was active in the 1940s and 1950s as a way to identify and eliminate suspected communists within the United States. Julius and Ethel Rosenberg became a symbol of the Cold War hysteria when they were tried for espionage and sentenced to death in 1951. Americans turned toward the Federal Civil Defense Administration, as well as faith, in order to deal with the growing battles of the Cold War.

After viewing this video, you should be able to:

WWII Aftermath & the Creation of the United Nations

Post-War Issues: Aftereffects of the Vietnam War on the U.S.

The Civil Rights Movement During the 1960s

Impact of the Cold War on Civil Rights in the U.S.

The Effects of the Nuclear Arms Race on Cold War Politics