Andrea has a Juris Doctor and has spoken at legal conferences on government transparency. 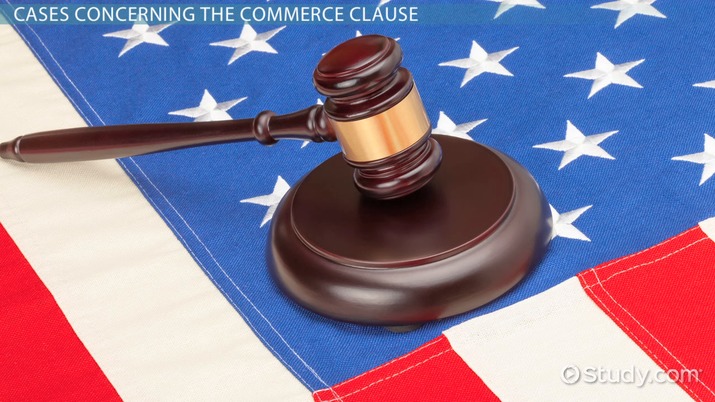 Coming up next: The Establishment Clause: Definition & Cases

First, it's argued that under the Commerce Clause, Congress has exclusive power to regulate commerce, and the states have no power to regulate interstate commerce. An example of this can be found in international trade dealings. For example if a company wants to distribute a product to another country, the agreement entered into is subject to federal laws and regulations.

The third interpretation argues that Congress and the states each regulate commerce, but only within the areas where they have exclusive regulatory power. This means that the states can regulate all commerce within their borders, but the federal government can regulate commerce between states. If there is a conflict between the regulations of the state and Congress, it's the job of the courts to determine which regulation wins over the other. An example of this can be found in transportation because within the boarders of each state, an individual state regulates the speed limit, registration of vehicles, etc. However, the federal government regulates travel done by commercial vehicles and buses between states.

Over the years, the Commerce Clause's reach has been stretched and expanded. Since commerce can be argued to encompass many aspects of everyday life in the United States, the Commerce Clause is used to justify federal regulations where regulation doesn't seem relevant to interstate commerce. For instance, the Supreme Court interpreted the Commerce Clause to allow Congress to regulate interstate navigation under Gibbons v. Ogden, 22 U.S. 1 (1824). It also stopped the Chicago meat industry's price fixing even though such meat business was only a local business under Swift and Company v. United States, 196 U.S. 375 (1905). The courts in Swift used the fourth interpretation explained earlier by deciding that Chicago businesses could not fix the price of meat and that the federal government instead could step in and regulate the price because it squelched fair competition.

There are many other cases in which the Commerce Clause was used. In Heart of Atlanta Motel v. United States, 379 U.S. 241 (1964), the Heart of Atlanta Motel refused to accept African-Americans and was therefore charged with violating the Civil Rights Act. The court ruled that Congress had the authority to regulate the motel under its Commerce Clause power because the motel's business primarily served interstate travelers, and therefore it wasn't able to refuse service to customers based on race. Similarly, in Katzenbach v. McClung, 379 U.S. 274 (1964), the Supreme Court ruled that the Civil Rights Act could be applied through the Commerce Clause to a local family-owned restaurant which refused to serve blacks because the restaurant served food which crossed over the Alabama state line.

Although cases like Katzenbach and Heart of Atlanta Motel stretched Congress' power to regulate under the Commerce Clause, United States v. Lopez, 514 U.S. 549 (1995) restricted the Commerce Clause's reach. The defendant violated the federal Gun Free School Zone Act of 1990 by carrying a handgun into a school. The Supreme Court sided with the defendant and held that Congress did not have power to regulate gun activity in schools under the Commerce Clause because carrying a gun on school property, even if repeated very often, is not going to have a substantial effect on commerce. The federal regulation against guns at schools, the court reasoned, was purely criminal and had nothing to do with commerce.

The ruling in United States v. Morrison, 529 U.S. 598 (2000) also restricted Congress' authority under the Commerce Clause. This case involved the Violence Against Women Act, which was enacted by Congress and made domestic violence against women a federal crime. The Supreme Court ruled that even though the acts committed against the woman in the case were tragic, the acts did not have a substantial effect on commerce, and any consequences should therefore be up to the state where the incident took place.

Although some early cases broadened Congress' authority under the Commerce Clause, the Lopez and Morrison cases restricted it. Additionally, though the Supreme Court has accepted broad interpretations of the Commerce Clause, the courts make it clear that the activity regulated by the federal government must have substantial ties to interstate commerce.

The Commerce Clause can be found in Article 1, Section 8, Clause 3 of the U.S. Constitution. Very generally, it gives Congress the authority to regulate interstate commerce. There are four main interpretations of how the Commerce Clause works to divide authority to regulate commerce between the federal government and the states, and no one interpretation has been deemed to be the correct one. They include the following:

For each of the following court cases, briefly explain how the Commerce Clause was impacted or was an important point of contention. Your answer should discuss some of the basic facts of the case.

Party Nomination to Congress: Process to Become a Candidate

How Contract Conditions are Excused

Seller's Right to Cure Under the Uniform Commercial Code