This lesson will focus on the Confucianism of Korea and Japan. In doing so, it will highlight the importance of the Five Key Relationships and filial piety. It will also explore the role feudalism played in the development of Japanese Confucianism.
Create an account

When discussing Confucianism's influence in Korea and Japan, it's important to understand the emphasis that Confucianism places on human relationships.

Unlike most Western religions, Confucianism does not teach the worship of any particular deity. Instead, it focuses more on human behavior, causing many scholars to consider it more of an ethical system or a code of conduct rather than a religion. Rather than focusing on the attributes of a deity, Confucianism focuses on human behavior, especially in the realm of human relationships.

In its ideal sense, a person practicing Confucianism will seek to always act honorably in all his relationships. This is especially important in what Confucianism calls the Five Key Relationships, which are the relationship of ruler to subject, father to son, husband to wife, elder to younger, and friend to friend.

It is this emphasis on relationships that has had a huge impact on the cultures of Korea and Japan. However, as is usually the case with religion and culture, each country has sort of put their own spin on this ancient faith. 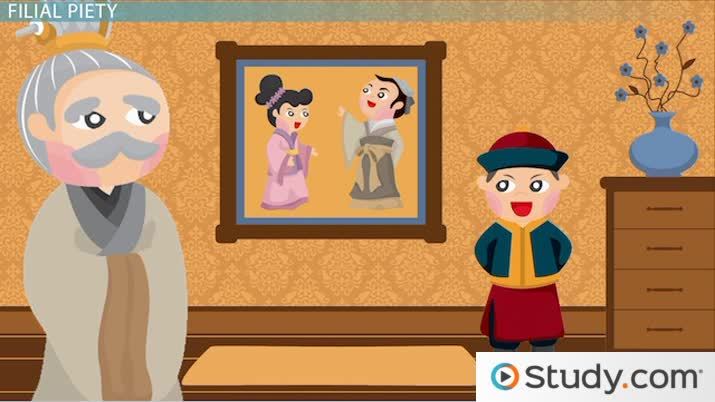 Coming up next: Confucianism and Women

Confucianism has profoundly impacted the structure of Korean society. In fact, although both North and South Korea have in many ways become modernized, Confucianism's influence still remains extremely strong in these lands, especially when it comes to the Five Key Relationships of Confucianism, specifically those dealing with the family.

With such a great focus on these family relationships, Korean Confucianism is full of rituals which are meant to uphold and strengthen the family. The most important of these is the ritual of filial piety, or deep respect of one's elders. However, going way further than what we in the West would call respect, filial piety is deeply ingrained. It's a hierarchical system of family governance in which the elderly outrank the young.

Even more odd to our Western paradigm, the ritual of filial piety applies to both the living and the dead. With this in mind, many consider filial piety to be ancestor worship or ancestor veneration. In this practice, sacrifices are very regularly made to one's deceased relatives in order to not only commemorate them but also to communicate and care for them.

This deep respect for the elderly also seeps into outside relationships and everyday activities, making Korea a very formal society. For instance, a Korean person will seldom if ever address an elderly person by their first name. In fact, most Koreans use Mr. or Mrs. when addressing anyone outside their families. Also, bowing to one another is the customary Korean greeting.

Many scholars believe this emphasis on the ruler-subject relationship was born from ancient Japan's feudal system of governance in which power was based on land ownership. In this system, the feudal lords were seen as the supreme authority over those they ruled. Nothing less than complete dedication and unquestioning obedience was tolerated.

Adding to this, scholars feel Japan's long history of the samurai, or the powerful military class, also attributed to the importance of the ruler-to-subject relationship. Known as the Bushido, the code of conduct and morals of the samurai class shaped ancient Japanese Confucianism so much so that loyalty to one's lord or ruler even took precedence over loyalty to one's family.

Placing a huge emphasis on the Five Key Relationships of ruler to subject, father to son, husband to wife, elder to younger, and friend to friend, Confucianism has deeply impacted the cultures of Korea and Japan.

Like in China, the country of its origin, Confucianism in Korea has historically placed a high value on family relationships. Known as filial piety, Korean Confucianism has emphasized a deep respect of one's elders, a hierarchical system of family governance in which the elderly outrank the young.

Although Japanese Confucianism has also taught respect of one's elders, the relationship of ruler to subject has historically taken precedence over family ties. Believed to be linked to the Japanese feudal system in which power was based on land ownership, ancient Japanese Confucianism touted complete and utter devotion to one's ruler or lord. Springing from Japan's long history of the samurai and the moral code known as the Bushido, loyalty to one's ruler took second place to nothing, not even to family ties.

The Confucianism of Japan and Korea
Related Study Materials

Jen, Li, and the Five Relationships of Confucianism

Figures of Speech: Types & Examples | What is a Figure of Speech?