In this lesson, we'll cover both the legal ramifications and the responsibility of teachers and staff when they receive reports of cyberbullying. We'll also look at the emotional and academic consequences for students.
Create an account

In your social studies class, you notice that James has been withdrawn lately. He sits in the back of class with his hood up and doesn't talk to anyone. Later, in the hallway, you see a group of girls taunting him with a picture from social media. You move over to intervene, but the girls walk away and James insists that nothing's wrong. Some students, however, start showing a series of exchanges humiliating James online. What do you do? You think this might be cyberbullying, so you decide to report it to your principle.

Cyberbullying is the process of exerting power over another person online to induce emotional harm. What happens if you discover cyberbullying? That's what we're going to be covering today, the consequences of bullying. To start, let's take a closer look at what happens in the school and the legal responsibilities you have as an adult. 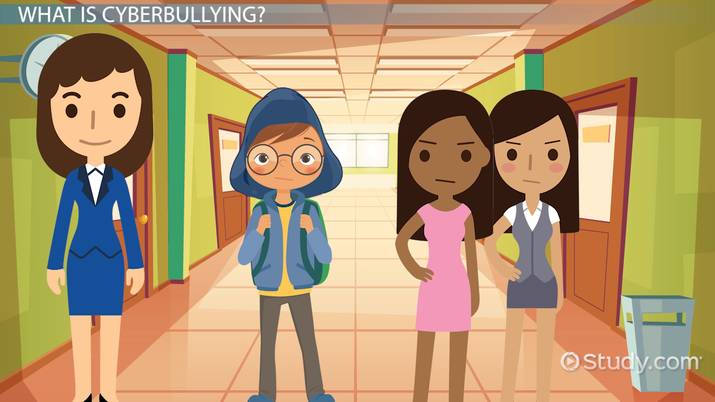 Coming up next: History of Cyberbullying

Every state has its own bullying laws, and, as a teacher, you're required to comply with them. Although there are no federal laws directly covering bullying, the federal government does outline the main points that should be covered in state bullying laws. Each state should include the purpose of the law and what behavior falls under the law, as well as procedures for monitoring, reporting, and the intended consequences.

It's up to the state to decide what consequences are needed and to the school to implement them. Under state law, all schools must investigate reports of bullying quickly and thoroughly, and many are required to have a clear system on reporting incidents. Schools also are required to be trained in bullying prevention and spreading awareness among students.

During an incident, any party involved should be interviewed. Some schools have a zero tolerance policy, where even a first offense in bullying is treated with extreme consequences, like suspension, expulsion, or pressing criminal charges. Such policies, however, have generally been found to be ineffective in preventing unwanted behavior, including bullying. Bullies often have their own emotional problems and are using bullying to manage them. Therefore, counseling for all parties involved, followed by rehabilitation, is a more effective consequence for bullies.

A few bullying cases do fall under federal discriminatory harassment laws. These laws protect people from being harassed due to sexual orientation, gender, religion, disabilities, or race. In these cases, the school must investigate immediately, provide a safe environment for the victim, and take measures to prevent retaliation.

A few bullying cases will also have criminal consequences. Any case involving a direct threat of violence, hate crimes, or child pornography must be reported to the police immediately. This can happen frequently during cyberbullying, since adolescents may send each other inappropriate text messages, which can get easily shared on the Internet. An adolescent sending a topless photograph to her boyfriend may soon find herself in trouble with the law.

The heart of cyberbullying is emotional pain. Over time, the embarrassment, sadness, and isolation that come from being a victim of bullying can take hold. Cyberbullying has especially negative effects on children since the bullying can occur everywhere non-stop, 24 hours a day, seven days a week, making it feel like it's impossible to escape - unlike face-to-face bullying at school. In addition, the humiliation is on display for everyone to see. And with the proliferation of smartphones during the 2010s, the access to this information is even more prevalent among adolescents.

Since the information is released online, teachers and staff may not be aware the bullying is even going on, leaving the victim to suffer in silence. This can cause severe damage to their socio-emotional being, resulting in depression, anxiety, trauma, and even suicide.

The bully isn't exempt from socio-emotional problems either. Most bullies have been bullied themselves or suffer from some type of trauma or abuse. They try to manage their emotions by exerting control over others, making them feel bad as well. Although it may seem that only the victim should be cared for, the bully also needs support. After all, if the bullying continues without intervention, the bully's needs are not being met either, and this lack of care can just create more victims. They may also suffer from depression and anxiety, along with trauma at home.

We usually think of bullying as damaging self-esteem and harming mental or physical health. However, bullying also has negative consequences on academics. Students who are bullied may skip class to avoid the bully, arrive late, or leave early. Students may feel humiliated and unwilling to face their peers, even though the cyberbullying occurs online. Embarrassment, rumors, and gossip follow the victim to school.

Teachers may not know that the absences are a result of cyberbullying, as it's harder to notice compared with in-person physical or emotional bullying. Depression can also cause a dip in grades as students become less engaged and more despondent about their lives.

Let's take a few moments to review what we've learned about the consequences of cyberbullying.

Cyberbullying is the process of exerting power over another person online to cause emotional harm. There are legal consequences to cyberbullying depending on the state's laws and school policy. Some schools may implement a zero tolerance policy, where students are immediately suspended or expelled for bullying, or implement rehabilitation services like counseling.

Federal discriminatory harassment law covers any bullying case that is based on sexual orientation, gender, religion, race, or disability. Bullying cases that involve hate crimes, violent threats, or child pornography must be reported to the police. Bullying clearly is damaging to socio-emotional health, both for the victim and the bully. Students can develop depression, anxiety, and trauma from prolonged bullying. Academics also suffer as a consequence of bullying, as students may become disengaged from school or skip to avoid the bully.

Differentiating Instruction Based on Student Readiness

What is Digital Citizenship? - Definition & Themes

Object & Subject Pronouns: Overview & Examples | What is a Pronoun?

Bulletin Board Ideas for Teachers