Sometimes, disputes can't be settled just by the parties involved. For example, when you were little, intractable fights between you and your siblings likely had to be decided by your parents, right? In a way, the Constitutional Court of Spain acts as the parents when Spain's government or legislature enacts controversial laws. If challenged by Spanish citizens, members of the Parliament, or members of the Constitutional Court itself, the Court is in charge of finding a solution. In this lesson, we'll explore the history, composition, and duties of this important organ of the Spanish government. 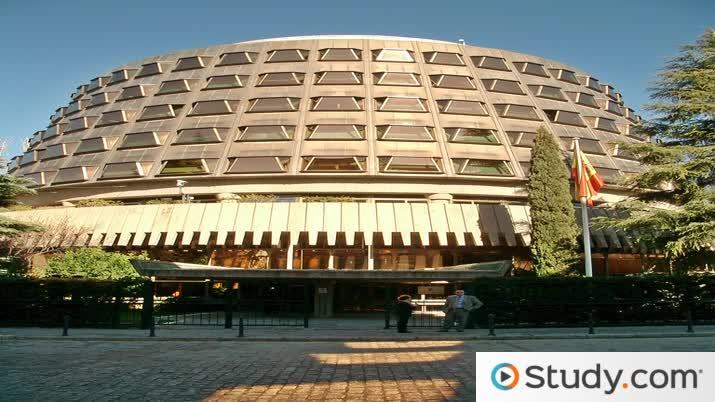 Coming up next: General Council of the Judiciary of Spain

The Constitutional Court is a direct result of the Spanish government writing a new constitution in 1978. For nearly four decades prior, Spain had been under a military dictatorship controlled by General Francisco Franco. When Franco died in 1975, his will reinstalled the monarchy of the House of Bourbon and specifically King Juan Carlos I. Juan Carlos, however, did not intend to rule as Spanish kings of the past. Instead, Juan Carlos declared Spain a constitutional monarchy, ordered new elections, and ordered a newly elected legislature to draw up a constitution.

That Constitution was completed and ratified by the people of Spain, the Spanish legislature (the Cortes), and the king himself by the end of 1978. Soon after, the Cortes realized the need to protect the Constitution and its laws from forces in the government or elsewhere in Spain that may try to attack its institutions or the rights of Spanish citizens. As a result, the 1979 Public General Act included a clause that provided for the creation of the Constitutional Court. The first judges were appointed to the court and held its first meetings the following year.

The Court is made up of 12 judges. All 12 of these judges are officially appointed by the king, though practically speaking, they are chosen by various branches of the Spanish government and recommended for selection to the king. Four judges are chosen by the lower house of the Spanish Cortes, the Congress, and another four by the upper house, the Senate. Both of the houses have to approve each appointee by a three-fifths majority vote. Of the other four, two are chosen by the government and two by the General Council of the Judiciary.

Once they are appointed, the judges serve 9-year terms and cannot be removed from office under any circumstance. Judges may not serve consecutive full terms and are only allowed to be chosen if they filled in another judge's term for a period of less than three years. In theory, judges can be just about anyone, but practically speaking, only judges and legal experts with years of experience are chosen. From among the Court's members, a president is chosen and recommended to the king, who serves a 3-year term as Court President.

According to the Act that established the Constitutional Court, nearly all sectors of Spanish law and government are subject to its decisions; the Court is considered the highest authority on the Spanish Constitution. They are required by law to check the constitutionality of all laws, statutes, or decrees made by governmental organizations, regional governments, or autonomous communities. These checks are usually instigated by appeals against certain laws filled by the president, the ombudsman, or 50 members of either the Congress or the Senate.

Knowledge of this lesson's details can help you to:

Heads of Spanish Government: The Spanish President & Council of Ministers

What is a Counterargument? | Definition & Examples

General Council of the Judiciary of Spain