Lindsey has taught a variety of English courses in both secondary and post-secondary classrooms, and has a master's degree in Rhetoric.

Learn about how Contemporary literature developed and understand its fundamental characteristics. Find out how American history and cultural norms really defined and developed the Contemporary period in American literature. Updated: 01/13/2020
Create an account

In this lesson, we will learn about the Contemporary period in American literature, where it came from, and identify its basic characteristics. The Contemporary period in American literature begins at the end of World War II, and in order to understand this literature and how it developed, we need to look at where it came from. With writers like Hemingway, Gertrude Stein and T.S. Eliot, the Modernist period (taking place between the 1920s and 40s) explored the ways that truth is not straightforward, rational or clearly defined, but rather how it is completely influenced by human perception. Their writing brought us deeper into the workings of the human mind as a means to get at reality.

In other words, Modernists believed that the characters' thoughts mattered more than the plot, and the way things are said - in terms of the rhythm and imagery - may communicate more about the character than what they are doing. Passages may not proceed in an ordered way, but may be more choppy or fragmented. The shift from working to objectively portray events and experiences in the world to the often nonsensical exploration of human psychology is a clear marker for Modern literature. It also brings a shift in how we see the world. By the end of WWII, the modernists had heightened our awareness that truth is merely a product of human perception. If truth is so influenced by human perception, then a clear, objective standard for truth isn't quite so clear-cut, and reality is, to some extent, what we make of it. 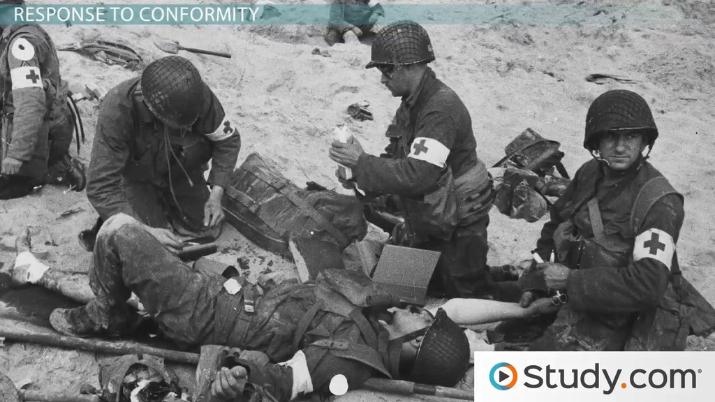 Coming up next: Contemporary American Literature: Authors and Major Works

So, depending on what kind of reality we were making, it might seem all fine and good to allow it to be determined by humans. But, the one we were making was not super fun. Throughout the end of Modernism, people were dealing with the horror of WWII. The bombs dropped on citizens in Dresden, Hiroshima, and Nagasaki left the world traumatized, wondering if there was any point to human existence. Whereas Modernist writers really began to explore human consciousness as a primary mode of getting at truth, the Contemporary writers following the war also struggled to reconcile the irrational and violent actions taken by humans.

Not only were writers dealing with the beginnings of this sort of existential crisis of purpose and meaning, they were also confronting absolute and unquestioned patriotism, which continued in America after WWII. During the war, national pride had been galvanized in order to defeat the German and Japanese armies. After the war was over, media and popular culture identified the U.S. as the prime hero of the time. Americans were the good guys, and they could do no wrong.

People in America at this time embraced the country's role as the leader of the free world, and technology and science were sort of worshiped as a growing consumerist culture arose in the 50s. It was like peer pressure on steroids. All of the cool kids were on one side that was in lock-step support for super traditional American values, which included support for things like free market capitalism, traditional courtship (meaning, for example, no sex without marriage), sobriety (meaning no drugs or alcohol), and it also included a system that segregated minorities and assumed that a woman's place in the world was at home. If it sounds kind of socially oppressive, that's because it was. But not everyone was silenced by the mass conformity. Many writers at this time were often disturbed by it and criticized the pressure to pipe down and just be American. This counter culture, often referred to as the underground, spoke out against the mass conformity as illustrated by the plays of Arthur Miller and J.D. Salinger's Catcher in the Rye.

So, to recap: the Contemporary period of literature continues the Modernist trend to explore the workings of human consciousness, and it is common to have the way things are said in terms of rhythm and imagery mean more than actions or plot. After WWII, many people struggled to deal with the horror of the war and felt uncertain about the existence of a stable sort of truth as well as questioned the goodness of humans. There was also simultaneously a march toward patriotism and mass conformity, and much of the writing in the Contemporary period can be understood as an underground response to conformity of the time, with a main theme for literature during this period being dissent from traditional norms and social orders.

Overview of Literary Periods and Movements: A Historical Crash Course

Naturalism in Literature: Authors and Characteristics