Learn about Alexandre Dumas' famous novel ''The Count of Monte Cristo,'' a tale of betrayal, revenge and redemption. Much like the plot of most thrillers today, Dumas' brings the main character Dantes through an array of challenges that he must overcome to achieve redemption.
Create an account

The Count of Monte Cristo is a novel by Alexandre Dumas about love, betrayal, jealousy and revenge. After all, what's a love story without jealousy, betrayal, and revenge?

This particular novel tells the story of Edmond Dantes, a well-adept sailor aboard the ship Pharaon. During the voyage, the captain of the Pharaon dies, and Dantes takes over, impressing the ship's owner. Dantes is promised a captainship when he returns to port in Marseilles. Also set to marry his fiancé Mercedes, things are looking up for Dantes.

This wouldn't be much of a revenge story without a villain or betrayal. Unfortunately, Dantes' success has incurred jealousy, which has created more than one enemy for him. 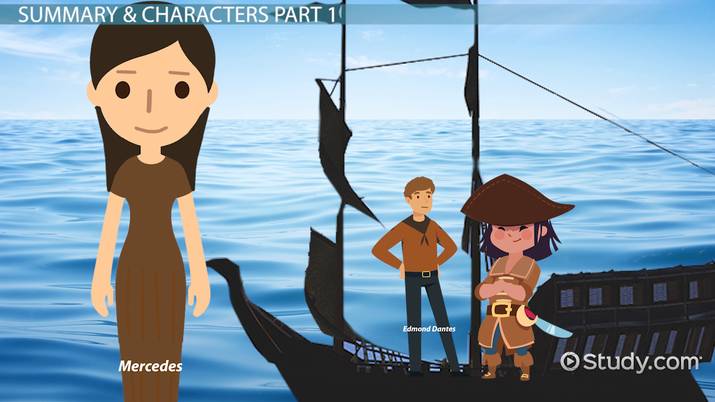 Coming up next: The Death of Arthur: Summary & Themes

Everyone in the story of The Count of Monte Cristo seems to be jealous of Dantes. Fernand Mondego is jealous of Dantes because he wants Mercedes for himself. Baron Danglars is jealous of Dantes' promised captainship of the Pharaon, which he wants. Gaspard Caderousse is a jealous neighbor of Dantes. Gerard de Villefort is a prosecutor who fears a letter that Dantes is carrying for Villefort's father - it might bring harm to Villefort's social and political status. The four of them plot to rid themselves of Dantes, each benefiting in their own way with Dantes out of the picture.

The four men conspire and Dantes is taken away in secret and imprisoned at Chateau d'If, an inescapable prison. Dantes does all he can to keep his sanity during his solitary confinement. Eventually, he hears Abbe Faria, another prisoner, burrowing through the prison. Dantes begins to dig as well and soon meets the elderly Abbe. Abbe teaches Dantes many scholarly things. He also tells Dantes of an incredible Italian treasure that's been hidden on an island. Just before the two of them have burrowed their way out, Abbe dies. Dantes conceals the body and hides himself in Abbe's burial sack that the guards carry out and throw into the sea.

Dantes is picked up by smugglers. Because of Dantes' sailing prowess, he is an asset to the smugglers and travels with them until he can locate the treasure that Abbe told him about. When he finally discovers it, he reemerges into society a very wealthy man. He calls himself the Count of Monte Cristo (hence the title of the novel). At this point, Dantes is ready to exact his revenge on the people responsible for ruining his life.

Dantes ingeniously plots against his conspirators by destroying the things that bring them the most happiness. Fernand, who is married to Mercedes, is the first target of Dantes' revenge. Dantes reveals information to the press that proves Fernand is a traitor. After Fernand's family leaves him, he kills himself. Danglers, who loves only money, Dantes destroys financially. Dantes plays on Caderousse's greed so well that Caderousse is killed by one of his own friends.

Finally, Dantes ruins Villefort. Dantes begins to reveal subtly that he knows about an affair that Villefort had long ago, which produced an illegitimate child. Out of jealousy, Villefort's wife plots to kill that child and the child's parents so that her son will be the first in line for an enormous inheritance. When Villefort discovers her plot, his threats force her to take her own life along with her son's.

In the end, Dantes feels that he might have gone too far with his revenge, but he is redeemed when his actions allow for two young lovers to unite and marry on the Isle of Monte Cristo. Dantes departs shortly after and is never seen again.

Let's review what we've learned. The Count of Monte Cristo is a novel by Alexandre Dumas about love, betrayal, jealousy, and revenge. It's also a tale of revenge and redemption. After the well-adept sailor aboard the ship Pharaon Edmond Dantes is betrayed by Villefort, Danglars, Fernand, and Caderouse, and secretly imprisoned at Chateau d'If, an inescapable prison, the path to redemption begins for Dantes. In prison, Dantes meets Abbe, a fellow prisoner who tells Dantes of a hidden treasure. Dantes escapes prison after Abbe's unfortunate death by hiding Abbe's body and concealing himself in Abbe's burial sack.

After spending a short time with smugglers, Dantes finds the treasure Abbe told him about and makes his way to exact his revenge on the men who betrayed him. After Dantes has destroyed the men responsible for betraying him, he finds peace and the ultimate redemption by not only setting things right after his own betrayals, but also by providing a way for two young lovers to unite.

The Piece of String Character Analysis

Irony in The Book Thief

What is Proofreading? - Definition & Symbols