The 15th-century marriage of Ferdinand and Isabella that united the two largest kingdoms on the Iberian Peninsula, Castile and Aragon, is regarded as the birth of the Spanish monarchy. Learn about the formation, succession, and regency of the modern Spanish crown, how the rise of fascism led to the abdication of a king in the 1930s, and how the monarchy was restored four decades later. Updated: 10/20/2021
Create an account

When we think of 'kings and queens' we tend to think of stereotypical images of the Middle Ages, like chivalrous knights, enormous feasts, and enormous battles with swords, shields, archers, and castles. In some countries, like England and France, kings and queens that made war on other nations and ruled their countries absolutely were certainly a part of this era. However, in Spain, the monarchy has a more recent and tumultuous history - one which this lesson will detail for you. 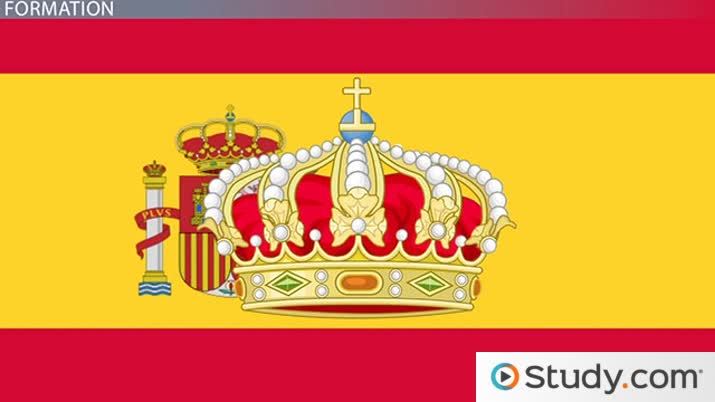 Coming up next: Heads of Spanish Government: The Spanish President & Council of Ministers

Indeed, something approaching the Spanish crown as we know it today did not form until the end of the 15th century. Prior to the formation of the Spanish crown, what we know today as Spain spent several centuries broken up between various independent states controlled by Christians in the north and Muslim rulers from North Africa in the south. In 1469, the two largest northern and central states, Castile and Aragon, were united by the marriage of their monarchs, Ferdinand and Isabella. The power couple extended their reign through conquering other independent regions in Spain and pushing the Muslim rulers back across the Straits of Gibraltar.

The crown was inherited by the grandson of Ferdinand and Isabella, Holy Roman Emperor Charles V, who became Charles I of Spain. His rule began in the early 16th century, beginning a period of Habsburg rule in Spain that united the Spanish crown with that of the Holy Roman Empire. This line ended in 1701, when Charles II died childless and the War of the Spanish Succession occurred for over a decade as various factions fought over the Spanish crown. The result was the House of Bourbon taking the throne. With brief interludes caused by the Napoleonic Wars and revolution, the House of Bourbon ruled over Spain well into the 20th century.

In the 1930s, however, liberals and socialists clamoring for reform caused considerable political turmoil in Spain. Rather than fight the Spanish legislature, which is called the Cortes, and likely the Spanish people as well, King Alfonso XIII chose to abdicate the throne in 1931, end the Spanish crown, and declare Spain a republic. The republic's attempts at rule, however, were marked by a power struggle between socialists and communists on one side, and those loyal to the monarchy on the other. The political instability devolved into civil war in only a few short years, and a fascist army led by General Francisco Franco emerged from the conflict as victors.

Franco installed a fascist dictatorship in Spain after his victory, and any political opposition to his regime was routinely arrested, imprisoned, and worked to death in forced labor camps. Franco did claim the crown still existed, but that Franco himself ruled Spain as the regent for life to the king of Spain. Who that king was, was anyone's guess. Franco simply assumed that title to give his dictatorship a bit more legitimacy.

Franco's death in 1975 marked both the end of the terrorization of the Spanish political left and the reinstitution of the Spanish crown. According to Franco's will, the next in line in the House of Bourbon, Juan Carlos, was to be named the King of Spain and to resume ruling. King Juan Carlos I, however, had other ideas. He immediately declared Spain a constitutional monarchy and ordered general elections for the Spanish legislature, the Cortes - the first since Franco had taken power.

The formal Spanish crown as most historians recognize it first came into existence with the joining through marriage of the two largest kingdoms in the Iberian Peninsula, Castile and Aragon, in 1469. During the rule of those first Spanish monarchs, Ferdinand and Isabella, the two consolidated the Spanish crown's control over much of what is today modern Spain. The crown endured for several centuries afterward, until the abdication of Alfonso XIII made Spain a short-lived republic before descending into civil war.

The fascist dictator that emerged, General Francisco Franco, declared himself regent to the king of Spain, though he never allowed any king to formally take office. After his death, King Juan Carlos I resumed the Spanish crown, but also declared Spain a constitutional monarchy, significantly reducing the role of the Spanish crown to figurehead status.

Impact of the Protestant Reformation on the Study of History