If there's one constant in life, it's change. For example, you most likely aren't the same person today as you were when you were in grade school. The same can be said of our two major political parties. The Democratic and Republican parties have undergone many shifts over the years in both their thoughts and constituencies, or people that belong to the party. Many historical events have caused these changes, but in particular, there are three mechanisms that have led our two major political parties to where they are today. These mechanisms are: 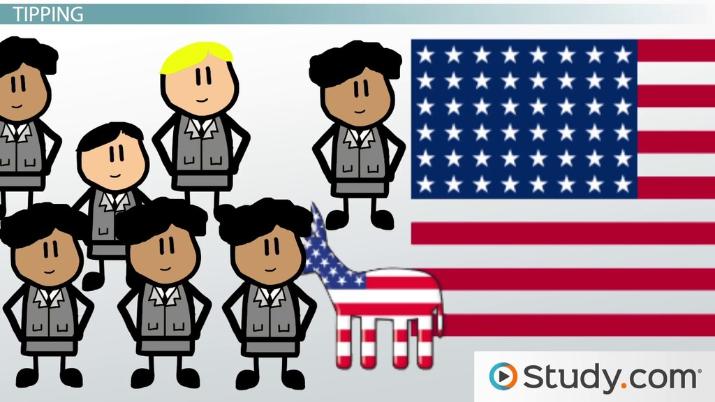 Coming up next: Electoral and Party Systems: Definition & Role

Realignment is a process in which a substantial group of voters switches party allegiance, producing a long-term change in the political landscape. This process might be similar to having grown up rooting for your hometown sports team as a child but then moving to live somewhere else later in life and then switching your allegiance to that new local sports team.

Realignment usually strengthens a party, or at least brings it closer in power to the competing party. This process can further strengthen a political party if it already is the dominant party and gains even more voters, or a less-dominant party can suddenly be boosted as it gains new voters. This process has happened during the presidential elections of Abraham Lincoln and Richard Nixon.

Unlike realignment, dealignment is a decline in party loyalties that reduces long-term party commitment. This process almost always weakens a political party. A real-life version of dealignment can be seen where I grew up. In Chicago, one of our baseball teams has not won the World Series in over 100 years. This lack of winning has caused many people to stop rooting for the team, which often used to have sold-out crowds and now finds that its fans are less loyal and come to the games less frequently.

In the political world, the number of independent voters, or voters who do not link themselves to one particular party, is steadily growing year by year, which in turn causes the predictable party memberships of the Democratic and Republican parties to become less certain. Some of these independent voters are also swing voters who frequently swing their support from one party to another or are people who vote for the best candidate regardless of their party affiliation, thus making party loyalties less predictable.

The last mechanism for political change is known as tipping. Tipping is a phenomenon that occurs when a group that is becoming more numerous over time grows large enough to change the political balance in an area. Even when groups of voters never change their party preference, if one group becomes more numerous over time, it can become dominant for that reason alone.

Despite the political mechanisms that have caused shifts in dominance between the Democratic and Republican parties over the many years of their existence, support for the two parties is roughly balanced today partly because the mechanisms for political change are harder to predict than before.

For example, for realignment to occur, a substantial body of citizens must come to believe that their party can no longer represent their interests or values. The problem must be so fundamental and not attributable to the behavior of an individual politician. Currently, there doesn't seem to be such a drastic shift in interests and values from those traditionally held in the Democratic and Republican parties.

However, historical influences, like birth and death rates, economic changes, and social changes, are still shifting in the United States. These are mechanisms of political change that are still potentially relevant today.

Overall, the historical result of each of the mechanisms for political change has yielded the following general composition of the current state of the Democratic and Republican parties: