The Dawes Act, technically named the General Allotment Act of 1887, was a piece of legislation that separated Native Americans from their land and moved them to smaller settlements. Learn more about this act, the events leading up to it and its aftermath. Updated: 10/12/2021
Create an account

What Was the Dawes Act?

The General Allotment Act of 1887, known commonly as the Dawes Act, was introduced by Henry Dawes, a Senator from Massachusetts. Simply put, the Act broke up previous land settlements given to Native Americans in the form of reservations and separated them into smaller, separate parcels of land to live on. More importantly, the Act required Natives to live apart from their nations and assimilate into European culture.

Dawes felt that the law, once fully realized, would actually save Native Americans from the alternative, which was their total extermination. However, the Dawes Act may, in fact, be the gold medal winner of all time when it comes to how often the best intentions result in the worst harm, since, ironically, it just about accomplished what Dawes claimed he was trying to avoid. 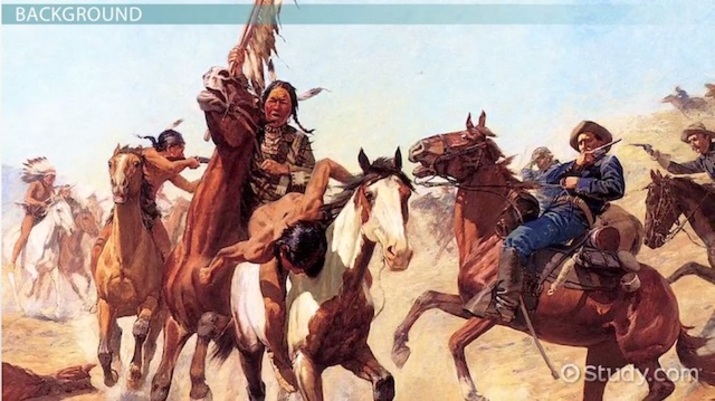 Try it now
Back
Coming up next: The Pendleton Act: Definition & Summary

Since Europeans arrived in the 15th century, Native Americans had been inexorably pushed west, as the frontier moved in front of colonization. By the mid-19th century, the expansion of the United States was in full swing. The passage of the Homestead Act in 1862, which effectively gave away land in the West to settlers in an effort to populate those territories, was a clear marker of what was coming.

Given all this expansion, it was clear that some sort of governmental policy should be adopted to accommodate both the Native Americans who chose not to resist and those who actively fought back. The initial approach, relocation, as typified by the Indian Removal Act of 1830, proved less than successful, especially given the variety, diversity, and entrenched nature of Native American societies across the eastern U.S. In 1851, the U.S. government passed the Indian Appropriations Act, which was supposed to create a long-term solution to the Native American issue: reservations.

The reservations, originally to be based in Oklahoma, but later across the West, were land grants upon which tribes could live more or less as they pleased, so long as they remained within the reservation's borders. However, many tribes ignored orders from the U.S. government to relocate, and the Army was brought in to enforce the policy (this became substantially more common after the Civil War ended in 1865).

Of course, bringing troops into the issue resulted in conflict, most famously in 1876, when Sioux, under the command of 'hostiles,' like Crazy Horse and Sitting Bull, wiped out George A. Custer and most of his command at the Battle of the Little Bighorn. The death of over 200 American soldiers right around the time of the nation's centennial celebration ignited cries for revenge against the Sioux and all recalcitrant Native Americans. This was the atmosphere in which Henry Dawes was operating when he unveiled his plan.

Dawes's plan was to 'save' Native Americans by changing their way of life. To understand this, it's helpful to take a quick look at how most Native American societies operated. This is, of course, by no means true of all Native Americans. With over 500 separate indigenous societies, there was a tremendous amount of diversity, but there were some values that were largely shared across the spectrum, and these were the values that Dawes saw as a genuine threat to Native American survival.

Native Americans tended to view land ownership as a fairly foreign concept, instead focusing on land stewardship (caring for and using the land, but not considering themselves owners of it in a legal sense). Similarly, most Native Americans, in the face of U.S. expansion in the Plains territories of the West and Midwest, led nomadic, quasi-hunter/gatherer lifestyles that were incompatible with the 19th-century American emphasis on agriculture.

Dawes saw these philosophies as a direct threat to Native American existence, since, without adhering to the American ethos of land ownership and capitalistic enterprise, he felt it was unlikely that a peaceful resolution could be reached between Native Americans and the U.S. government. His plan was to survey Native-held reservations, which varied in size based on the particular tribe's area and size, and separate them into smaller units, or allotments, of around 160 acres apiece. These allotments would then be given to Native Americans. Those who accepted and lived separately from their tribes would be granted U.S. citizenship. The sizes of the parcels were equal regardless of how much land the tribe had previously been allotted for the reservations.

The central point of the Dawes Act was to remake Native societal life. Requiring people to live away from their tribes was meant to break up that social structure as the defining feature of Native society. Similarly, the Act required Native Americans to adopt 'the habits of civilized life,' which meant giving up their previous nomadic lifestyles and taking up agricultural pursuits.

The impact of the Dawes Act was disastrous. The net result was that Indian-held land decreased rapidly, from over 150 million acres to just under 80 million within 25 years. The dividend was sold to settlers or railroad companies. One of the provisions of the Act was that 'surplus' land would be sold for profit, which ultimately benefited the U.S. government and settlers much more than Native Americans.

Socially, the Dawes Act was a major contributing factor in the disintegration of Native American social life. The destruction of the tribal unit and subsequent attempts to eradicate Native languages, customs, and religions had an enormous negative impact on Native cultures. Dawes's belief that to be civilized meant to 'wear civilized clothes. . . cultivate the ground, live in houses, ride in Studebaker wagons, send children to school. . . and own property' was as harmful, in the long run, as anything George Custer did.

Policies towards Native Americans in the 19th century had largely either been focused on setting land aside for Natives to live on, called reservations, or forcing them militarily to submit to U.S. authority. The General Allotment Act, known as the Dawes Act for its creator, Sen. Henry Dawes, attempted to integrate Native Americans into U.S. society by breaking Indian land into allotments and destroying the tribal structure of Native life. The law, despite Dawes's belief that it would save Indian culture in America, was highly destructive to Native Americans, both in terms of land held and their own tribal customs.

The General Allotment Act of 1887 is also known as the Dawes Act.

The Dawes Act broke up previous land settlements given to Native Americans in the form of reservations and separated them into smaller, separate parcels of land to live.

Henry Dawes was a Senator from Massachusetts.

Homestead Act: The Homestead Act gave away land in the West to settlers in an effort to populate those territories; it was a clear marker of what was coming.

Indian Removal Act of 1830 was the unsuccessful attempt to relocate the Native Americans.

Reservations: Reservations are land grants whereby Indian tribes could live however they pleased.

Battle of the Little Bighorn was a battle that ended in the death of over 200 American soldiers right around the time of the nation's centennial celebration, which ignited cries for revenge against the Sioux and all recalcitrant Native Americans.

Review the lesson on the Dawes Act of 1887 so that you can subsequently: