The Aztecs were a powerful society that fell in a clash of empires. Explore the defeat of the Aztecs, starting with the meeting of the Old and New worlds that brought about disadvantaging factors and the eventual fall of the Aztec Empire. Updated: 10/30/2021
Create an account

The Clash of Empires

In 1519, two of the greatest military empires in history collided in the Valley of Mexico. The defenders were the mighty Aztecs, the powerful empire in Central America, led by the Mexica people in their capital city Tenochtitlán. The invaders were the Spanish, fresh out of an 8-century long war with the Islamic Moors for the control of Spain. 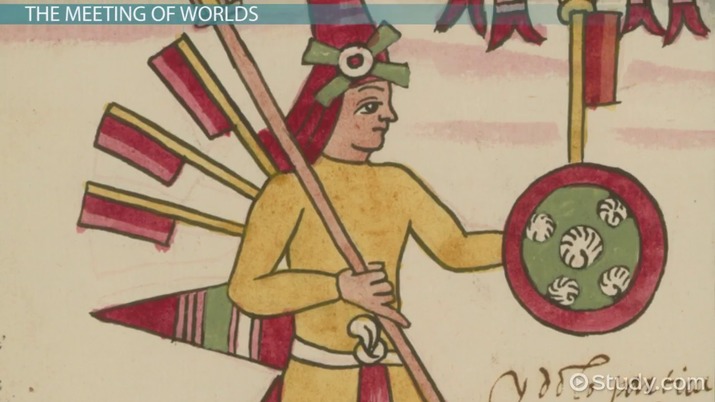 Coming up next: The Defeat of the Inca

The Meeting of Worlds

In 1492, Columbus sailed the ocean blue. And then he bumped into the Caribbean. Columbus' discovery set off a Spanish age of exploration, and soon the Gulf of Mexico was full of Spanish settlements. On the island of Cuba, there was a young man named Hernán Cortés, who wanted to improve his position in life. The quickest way to do that as a Spaniard in the 16th century was military conquest. Cortés asked the governor of Cuba for permission to explore the mainland of Mexico, which had not yet been done. The governor said no, and Cortés went anyway.

Cortés and his ships landed on the shore of Mexico in 1519. Cortés then proceeded to burn his ships, so that his soldiers could not back out and run back to Cuba, partly because Cortés had broken the law by disobeying the governor. The Spanish conquistadores, conquerors, soon heard about a rich empire in the heart of Mexico and started marching inland. By the end of the year, they reached the Valley of Mexico and the city of Tenochtitlán.

There is a famous myth that Cortés and a dozen Spaniards single-handedly took down the greatest empire in Central America. This is not true. The defeat of the Aztecs was due to several other factors. First was a woman named Malintzin, or Doña Marina in Spanish. Marina was a Nahua woman from the Yucatán Peninsula who was given to the Spanish as a sign of peace from one of the towns the Spanish entered. Marina spoke several languages and was the interpreter for the Spanish as they marched across the Aztec Empire. Without her negotiating treaties and alliances, the Spanish would not have gotten far.

A second factor were the new allies of the Spanish. As the Spanish crossed the Aztec Empire, they were not meeting with the Mexica. They were dealing with people who had been conquered by the Mexica. Most of these cities were not overly fond of being subjugated by the Aztec Empire, and Cortés developed a huge army of local warriors. To the literally thousands of native soldiers, the Spanish were just another mediocre power, but together they could defeat the Mexica and destroy the empire. The most important alliance was with the city of Tlaxcala. The Tlaxcalans were the ancient enemies of the Mexica and ruled a powerful kingdom. Without these soldiers, the Spanish would have faced an impossible task of fighting the Mexica.

The third important factor was disease. The Spanish unknowingly introduced smallpox into Mexico. The Spanish were resistant to it, but the people of Mexico, who had never been exposed to smallpox, were very susceptible. By some accounts, up to half the population of Tenochtitlán died of smallpox.

Fall of the Aztec Empire

With Doña Marina helping the Spanish form powerful new alliances, and with smallpox devastating the Mexica, the Spanish entered Tenochtitlán in 1519—but as guests. The emperor, Moctezuma, had invited the Spanish to enter his city because he did not see them as a serious threat, and he was curious. The first meeting was full of miscommunications. Moctezuma gave Cortés gifts of jewels, which in Mexica culture was a gesture that indicated that the Mexica, the gift-givers, were more powerful than the Spanish, the gift-receivers. The Spanish saw this as a sign that Moctezuma was submitting to them.

The Spanish stayed in Tenochtitlán for months, until eventually hostilities broke out in 1520. Cortés and his allies were forced to flee the city in a great battle, leaving behind the immense treasure they accumulated. They called it La Noche Triste, the sad night. The elite leaders of Tenochtitlán overthrew Moctezuma and killed him for letting the Spanish live there, and a new emperor rose, who soon died of smallpox.

In 1521, the Spanish and Tlaxcalans returned with an even bigger army of local warriors and laid siege to Tenochtitlán. The great city fell and was burned to the ground, marking the effective end of the Aztec Empire and the beginning of the Spanish control of Mexico. The last Aztec emperor, Cuauhtémoc, was tortured by having his feet burned and executed in 1525. The Mexica and other local cultures survived as subjects of the Spanish. The heritage of the Mexica and their Aztec Empire is still an important factor in Mexican identity to this day.

In 1519, the Spanish soldiers called the conquistadores landed on the shore of Mexico and started a conquest of the Aztec Empire, ruled by the powerful Mexica in their capital city Tenochtitlán. Over the course of the conquest, the Spanish met a local woman, named Maltintzin, or Doña Marina, who became their translator and helped them negotiate alliances. The Spanish made plenty of alliances because many cities in Mexico did not like being subjects of the Aztec Empire, including the very powerful city of Tlaxcala.

When Cortés and the Spanish fought the Mexica, they had thousands of allies fighting with them. Additionally, Tenochtitlán was severely weakened by smallpox. Tenochtitlán fell in 1521, and the last Aztec emperor, Cuauhtémoc, was executed in 1525. The Spanish took control of Mexico, but the identity of the Mexica people lasted into today.

After you have finished this lesson, you are able to:

The Defeat of the Aztecs
Related Study Materials

The Spanish Golden Age: Growth of Power & the Arts