What Was the Dominion?

The Dominion of New England was an English governing organization that united the New England Colonies into a single administrative unit from 1686 to 1689. 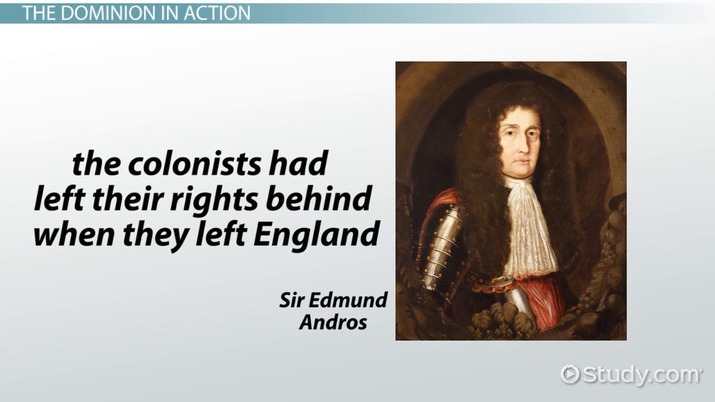 Coming up next: The Fundamental Orders of Connecticut: Definition, Summary & Significance

The Dominion was something unfamiliar in New England. Before 1686, most New England colonies operated under individual charters that allowed each colony a good measure of self-government. The colonists, who were mostly Puritans, were used to organizing their affairs as they pleased. They elected their own councils, made most of their own laws, enforced local regulations as they saw fit, and resented English interference. A few of the colonies had formed the New England Confederation for a mutual defense, but for the most part, each colony was independent and looked out for its own interests.

Unfortunately for the colonists, this arrangement no longer suited England. The English government wanted to tighten control over its colonies, especially in the area of trade. It had passed Navigation Acts in 1651, 1660, 1663, and 1673 that strictly limited foreign trade, clamped down on colonial imports and exports, and increased taxes. All imported and exported goods, according to the Acts, had to ship through England in English or colonial ships. The colonies could no longer trade with foreign nations, who had been their best customers prior to the Acts. Needless to say, the colonists were not pleased. Smuggling flourished as colonial merchants, especially in New England, made deals with foreign traders and illegally welcomed foreign ships into colonial ports. England decided it was time to crack down on this disobedience.

England was also eager to limit colonial manufacturing. New England was beginning to develop textile, iron, and leather industries, which meant that colonists no longer needed to import as many of these goods from England. English manufacturers worried about losing one of their primary markets.

There were other things about New England that the English government wanted to change. New England, the mother country decided, was too much controlled by Puritans. It was time to increase religious freedom, at least for members of the Church of England, who should be able to take a more active role in government and colonial life without Puritan discrimination. Colonial land titles were just plain messy, the English felt, and they needed to be better regulated. Of course, there was always the issue of defense. Several colonies working together would provide a better line of defense against French and Indian attacks than individual colonies working alone.

For all these reasons, then, England determined that the New England colonies would trade in their individual charters for a new, united government, the Dominion of New England.

The Dominion in Action

The English government commissioned Joseph Dudley as the first President of the Council of New England. Dudley took control over the Dominion on May 25, 1686, setting up his headquarters in Boston.

Overall, Dudley's time in office was unsuccessful. The colonists simply would not work with him. Each colony was supposed to elect representatives to serve on the Dominion's new council, but most of the colonies either refused to elect anyone, or those elected refused to serve. Dudley tried to introduce the Church of England into the Dominion but met with resistance everywhere. He tried to enforce the Navigation Acts, but again, the colonists would not cooperate. He wanted to raise money through taxes, but according to his commission, he didn't have that power. All Dudley really managed to do was appoint a few judges.

Clearly, the Dominion needed a leader with a heavier hand. Sir Edmund Andros received his commission as President in June but didn't assume power until December 20, 1686. Andros was a hard-liner. He believed that the colonists had left their rights behind when they left England. The mother country should have total control over her colonists, Andros thought, and the colonists would just have to get used to it.

Andros began making changes right away. He established a court to enforce the Navigation Acts. This court had no jury, and if merchants were found guilty of smuggling, the court seized their ships. Andros also vigorously promoted the Church of England, forcing Puritans to open their meetinghouses to Anglican services until the Anglicans could build their own churches. The new president severely limited town meetings, which were the heart of New England's local government. He also revamped the land title system, requiring all colonial landowners to prove their ownership, apply for new titles, and pay title fees and annual land taxes. Finally, Andros developed a new taxation system, heavily taxing livestock and imported goods, especially alcohol.

The colonists were anything but pleased about all this. They resisted any way they could. The colonial government in Connecticut even embraced a bit of trickery. When Andros came to Connecticut to collect the colony's charter and assert his authority, the colonists, led by Governor Robert Treat, met Andros at Hartford. They laid their charter on the table, but suddenly, the lights went out! When they were relit, the charter was gone. Andros called for an extensive search, but his men never did find the charter. The Connecticut colonists had hidden it in an oak tree!

The colonists were so fed up with Andros' heavy-handedness that they decided to appeal to King James II. Prominent Puritan minister Increase Mather was elected to travel to England to meet with the king. He had quite a challenge getting there. He was arrested twice in the colonies and tried on trumped up charges, but finally in April 1688, Mather boarded a ship to England.

Mather's pleas to the king seemed to be successful. In October 1688, James II promised to address the colonists' concerns. Before he could do so, however, he became the victim of the so-called Glorious Revolution. Working closely with the English Parliament, William of Orange (a Dutchman) invaded England, deposed James in December 1688, and assumed the throne, ruling jointly with his English wife, Mary.

News of this change in leadership didn't reach New England until late March 1689. The colonists immediately petitioned the new king and queen to restore their individual charters and end the Dominion. They figured that the new monarchs, who were Protestant, might be more sympathetic to their situation than the Catholic James.

Some colonists decided that they didn't want to wait to hear from William and Mary. Taking matters into their own hands, they rioted in Boston on April 18, 1689. Andros, Dudley, and other Dominion supporters were arrested and imprisoned. Merchant Jacob Leisler followed suit in New York, overthrowing Dominion-supporting Governor Francis Nicholson and taking over the New York government. The Dominion collapsed.

William and Mary cooperated with the colonists' demands. They issued new, individual charters, and the colonies went back to their independent ways, governing themselves through their elected assemblies and managing their own affairs. The English government decided to try a policy of 'salutary neglect' in the colonies, allowing the colonists the freedom they craved...at least for a while.

The Dominion of New England was an English governing organization that united the New England colonies into a single administrative unit from 1686-1689. The English government felt that colonies had too much freedom and sought to limit foreign trade, limit colonial manufacturing, increase religious freedom for the Church of England, and force the colonies to unit for defense.

After going through two presidents, Joseph Dudley and Sir Edmund Andros, the Dominion collapsed in 1689. Listening to the colonist's pleas, the new English monarchs, William and Mary, issued new, individual charters and the colonies went back to their independent ways, governing themselves through their elected assemblies and managing their own affairs.

Molasses Act of 1733 Overview & Importance | What Was the Molasses Act?