Linsey is currently pursuing her Ph.D. in English Literature at Claremont Graduate University and has taught students of all ages in English and the humanities for 10 years.

View bio
John Webster's 'The Duchess of Malfi' is a Senecan tragedy about a young widow who remarries for love. Review a summary of the play, then analyze its major themes of corruption, Catholicism, and gender. Updated: 10/11/2021
Create an account

Born in 1580, Webster was younger than Shakespeare and came to prominence in the final years of Shakespeare's career. Webster's plays are known for spectacular and disturbing depictions of violence. Like modern filmmakers such as Quentin Tarantino, Webster pushed the boundaries on what was acceptable to be shown on the stage, and his plays are known for their dramatic spectacles of violence. Perhaps no play better demonstrates this than The Duchess of Malfi. 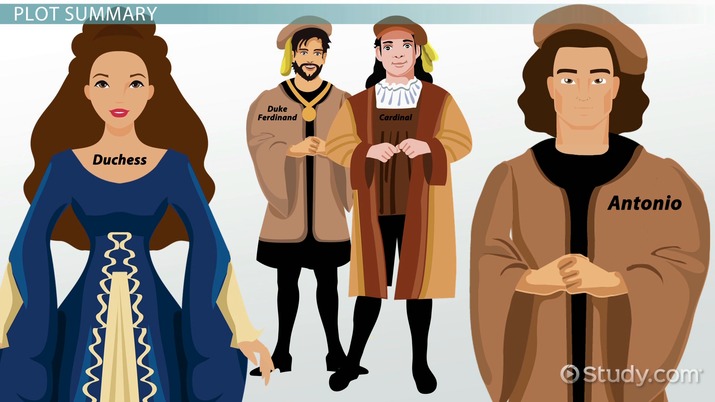 Coming up next: Native American and Colonial Literature

Set in the Italian city of Malfi, the play tells the story of the Duchess, a young widow who falls in love with the lower-class Antonio. The Duchess' evil brothers, Duke Ferdinand and the Cardinal, don't really approve of the Duchess marrying Antonio. However, the Duchess and Antonio marry in secret and have three children before being found out.

The Duchess and Antonio attempt to run away and Antonio and their eldest child manage to escape. However, the Duchess is betrayed by her servant Bosola, who was secretly working for Ferdinand, and the Duchess and her two younger children are executed. The injustice of this turns Bosola against the Cardinal and Ferdinand and he swears to exact revenge for the Duchess.

The play ends in an escalating chain of violence, as first the Cardinal confesses his role in the murders to his mistress and then murders her. Bosola then mistakenly kills a returning Antonio, thinking him to be the Cardinal. Bosola eventually succeeds in killing the Cardinal and then he and Ferdinand kill each other in a brawl. The play ends with Antonio and the Duchess' eldest son taking his place as heir to Malfi.

The Duchess of Malfi, like most of Webter's work, is a part of the genre of drama known as 'Senecan tragedy,' named for the Roman playwright Seneca, who is credited with inventing the form. While typical tragedies, such as Oedipus Rex or King Lear feature a great man who is destroyed by a fatal flaw in his character, Senecan tragedy is marked by a love of bloody, spectacular violence and a focus on revenge. Revenge runs throughout The Duchess of Malfi. The Cardinal and Ferdinand first exact revenge on the Duchess for disobeying them and then Bosola vows to take revenge on them in turn.

The Duchess of Malfi is best known for its spectacular and disturbing violence. While violence was a common part of plays in the English Renaissance, Webster's are remarkable for the inventive and grotesque ways in which that violence is depicted. This includes scenes of dark humor, such as when Ferdinand convinces the Duchess that Antonio is dead by giving what he says his Antonio's severed hand, but is actually a wax figure. It also includes scenes offensive to the sensibilities of the time, such as the Cardinal using a poisoned Bible to murder his mistress.

The Duchess of Malfi deals with many major themes. We'll look at them here.

While the Cardinal and Ferdinand use their power to take their revenge, it's because of their power that Bosola must take revenge as well. Like many heroes of revenge tragedies, like Hamlet, Bosola cannot rely on the rule of law, because the agents of that law are themselves corrupt. So, Bosola must take revenge himself and kill Ferdinand and the Cardinal, dying himself in the process.

The theme of corruption is reinforced in the last scene, when Antonio's surviving son defies his dead father's wishes and remains in Malfi to become the new Duke. Antonio had told his son to stay away because Malfi was so corrupt at its core. Therefore, the play ends on a down note, since it implies that the corruption and cycle of violence and revenge will not end even though Ferdinand and the Cardinal are dead.

Related to its theme of corruption is the play's depiction of Catholicism. England had broken from the Catholic Church at the time of the play's writing and therefore Catholic countries, such as Italy and Spain, were a common setting for English revenge tragedies, which depicted both the church and government of these countries as impossibly corrupt.

The Duchess of Malfi takes this depiction to the next level, though, by making the Cardinal, a high-ranking official in the Catholic Church, perhaps the play's most evil character. Even before he murders his sister and her children, the Cardinal is a hypocrite who loves gambling and keeps a mistress despite taking a vow of chastity. And the disconnect between the Cardinal's character and his position is perhaps best illustrated in one of the play's signature acts of violence, when he murders his mistress with a poisoned Bible.

The Duchess represents many of the restrictions of being a woman in this time period. When the play opens, she's a young widow, which ironically was one of the few situations in which Renaissance women had some independence, since they weren't directly under the control of a father or husband.

It's the independence given to the Duchess by this situation that causes the play's central conflict. She wants to marry for love, but her brothers want her to marry someone of a proper class or, preferably, not marry again at all. The Duchess asserts her right to make her own decisions by marrying Antonio, even though it costs her her life and the lives of her children. The Duchess' famous last line, 'I am the Duchess of Malfi still,' shows her being defiant and asserting her control even as she's about to be strangled to death.

The Duchess of Malfi is one of the great plays of the English Renaissance, written by John Webster. John Webster was a playwright and younger contemporary of William Shakespeare in the 16th century. The English Renaissance was a period of great art and literature lasting from the late 15th to the early 17th century. It's also an exemplar of the form of Senecan tragedy, a genre of plays that depicts revenge and bloody, spectacular violence, named after the Roman poet, Seneca. However, behind the violence, it's also an exploration of political and religious corruption, specifically that of the Catholic Church, made especially clear by the use of a Bible as a murder weapon, and of the roles of women in the Renaissance.

As you come to the end of the lesson, you're ready to:

The Duchess of Malfi: Review and Comprehension

In this lesson, we learned that The Duchess of Malfi is a masterful tale of love, politics, and social status written by John Webster during the English Renaissance. Through its address of themes such as corruption, social class, religion, gender, and familial relationships, the play also commented on contemporary issues facing English society. Answer the following questions to review and reinforce your knowledge of the play.

1. Which characters are siblings in the story, and what are their social statuses?

2. Why was the Duchess' desire to marry Antonio so distasteful to the Duke and the Cardinal?

3. What is ironic about the outcome of the story where Antonio and the Duchess' son becomes the Duke of Malfi?

4. What elements of the story are exaggerated to show English distrust of Catholicism?

5. What are the specific elements of the play that make it a Senecan tragedy?

6. In what way does Webster portray Bosola as the product of a corrupt society?

3. Despite the Duke's and the Cardinal's attempts to prevent the Duchess' marriage to a lower-class man and to punish her after her marriage, the product of that "shameful" marriage becomes the heir to the family fortune and title.

4. The evil character of the Cardinal, his hypocrisy in committing murder and fornication, and his behavior toward his own sister are exaggerated indications of English distrust of Catholic countries and their figureheads. This evil man is the opposite of what his religious position is supposed to represent.

The Gunpowder Treason: England After Elizabeth I

Through the Looking Glass: Themes & Analysis