In this lesson, you'll explore the creation, development, and significance of one of Italy's most important churches and increase your knowledge of architecture, art, and history. When you are through, test your knowledge with a quiz.
Create an account

The Duomo of Florence

'The most important building in the world!' This is what the people of Florence might have called the Duomo Cathedral in the 1400s. To them, it probably was the most important building in the world. Instead of competing with other major cities through football games, Italian cities tried to outdo each other's buildings. Whoever had the best buildings won! The Duomo Cathedral of Florence was so big, and so important, it helped start a whole new era of art and engineering. Florence had a right to be proud!

The Duomo Cathedral of Florence, also called the Basilica di Santa Maria del Fiore, is basically a church. A duomo is an Italian word for a cathedral, or a Catholic church where the bishop is located. All cathedrals, including the Duomo Cathedral of Florence, are designed with four perpendicular arms so that the entire building has the shape of a cross, symbolizing the crucifixion of Christ. The long arms running from west to east are called the nave, and the shorter ones from north to south are the transept. The area where the nave and transept meet is called the crossing. 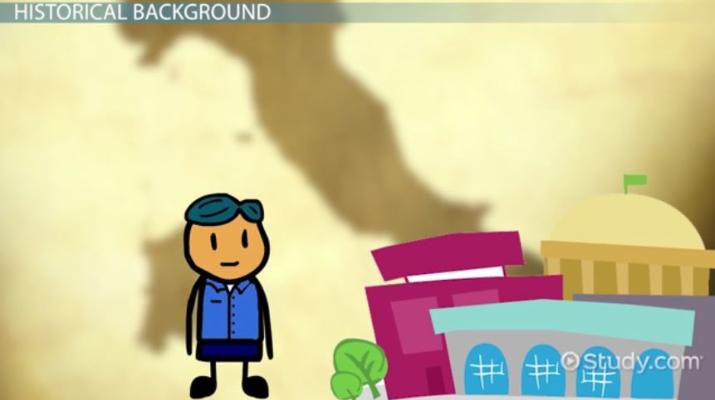 Coming up next: Catholic Doctrine of Transubstantiation: Definition & Overview

During the time when the Duomo was built, Italy was full of city-states, or cities operating as independent governments, that were building up new wealth from international trade. As such, they were constantly competing with each other. Sometimes this meant war, but usually the competitions were simply designed to embarrass the other or prove that one city was the richest and most powerful in the area.

One popular way to do this was by constructing massive buildings that required lots of money, manpower, and technological innovation. Many of these buildings were so complex that the original architects died before they were completed. The Duomo of Florence was so big that it took decades to build and centuries to decorate with statues and paintings. This era of competition, art, inventions, war, and religious fervor was called the Italian Renaissance, which lasted from roughly the 1300s through the 1500s.

Building the Duomo of Florence

As Florence grew to become one of the most powerful city-states in Tuscany, it displayed its wealth by building an enormous cathedral meant to dwarf any other building in the competing cities of Siena, Pisa, or Milan. In 1296, Arnolfo di Cambio began construction on the cathedral, which he designed to be the most beautiful in all of Tuscany and which was to hold a staggering 30,000 worshippers.

In typical Tuscan style, the church's outside is covered in geometric patterns of marble blocks. It's horizontal in design, meaning that it emphasizes its length and width rather than its height. Because the Duomo of Florence was meant to emphasize size, the inside crossing was 140 feet wide. This was entirely new for churches and made the inside feel extremely spacious.

Although the entire cathedral is incredible, the most famous architectural feature is the dome, called the cupola in Italian. Around 1417, the building commission awarded Filippo Brunelleschi and Lorenzo Ghiberti the task of building a dome on the top of the cathedral. Ghiberti ended up dropping out of the project because he was working on another part of the cathedral. Brunelleschi was facing a monumental task. The area that the dome had to cover, the 140-foot crossing, was so big that nobody knew how to build a dome that wouldn't be so heavy it would collapse.

After lots of mathematical calculations, Brunelleschi decided to build a dome with a slight point, rather than a smooth, round top. This style, called ogival, helped reduce the pressure of the structure and made the base of the dome responsible for supporting its weight, which made it stronger. Brunelleschi also invented a double shell system, where 24 ribs held a smaller version of the dome inside the outside shell.

Brunelleschi was a great Renaissance architect, but to make this dome he had to use more than the typical geometric and Roman-inspired designs. Since the dome was the first building project of its kind, Brunelleschi actually had to invent many of the tools and techniques used to build it, including certain kinds of cranes. Brunelleschi even invented the blueprint, but he forgot to teach other people how to read it, so the construction crew didn't know how to build the dome until Brunelleschi came and explained!

The Campanile of the Duomo

The next major addition to the Duomo of Florence came in 1334, when Giotto di Bondone designed the campanile (bell tower) after the death of Arnolfo di Cambio. Giotto's campanile featured seven bells and is made of geometric shapes that could exist either as a group or individually. Giotto's campanile displays several of the fundamental principles of Renaissance architecture: mathematics, logic, and basic geometric shapes like squares and triangles that interact to create a balanced, soothing beauty.

The campanile was added to by Andrea Pisano, who replaced Giotto as the Master of Works in 1343. Pisano added two more levels on top of Giotto's original design. In 1348, construction stopped because of the infamous Black Death, which hit Italy that year. Then, from 1351-1359, Francesco Talenti became the Master of Works and added the final levels to the campanile. Inside the niches of the campanile are many marble statues.

The Baptistery of the Duomo

The baptistery, the area where new believers were baptized, was built as a separate building next to the church because of the belief that one must be baptized before being allowed into the cathedral. The baptistery is an octagonal (eight-sided) structure and has a mosaic ceiling covered in thousands of pieces of painted glass, stone or ceramic that make up a larger picture of Biblical scenes. The ceiling was started around 1225 and was worked on throughout the next century. Although none of it is signed, most art historians believe that the famous 13th-century Italian artist Cimabue was a major contributor.

The most famous feature of the baptistery are the east bronze doors, known as the Gates of Paradise. In 1401, the Wool Guild of Florence sponsored a competition to design the doors, which faced the front door of the main cathedral. For the competition, each artist had to submit a sample panel depicting a scene from the Old Testament. Lorenzo Ghiberti won the competition with a design featuring figures that seemed almost like Greek or Roman statues. They were poised, posed, and carved in classical beauty with toned muscles and perfectly proportioned bodies. Ghiberti also used a realistic illusion of space, making items smaller that were supposed to be further away, which was groundbreaking for the time.

Significance of the Duomo of Florence

The Duomo of Florence is one of the greatest architectural wonders of the world. Its size and beauty are still inspirational, and at the time, they were revolutionary. Between Giotto's bell tower, Brunelleschi's dome, and Ghiberti's doors, the Duomo of Florence is largely responsible for kicking off the Italian Renaissance. These works of art defined modern standards of beauty and perfection and inspired Renaissance artists, architects, and sculptors to strive for realistic spatial depth and classical geometry to achieve a sense of balance and peaceful beauty. It also taught artists to push the envelope, try new things, invent the tools they needed, and to defy any limitations.

The Basilica di Santa Maria del Fiore, commonly called the Duomo Cathedral of Florence, helped set the tone of the Italian Renaissance. This period, from roughly the 1300s through the 1500s, was characterized by new approaches to art, engineering, and religion sponsored by powerful city-states like Florence. Through massive building projects like the Duomo of Florence, cities displayed their power and wealth.

The Duomo of Florence was especially important because of three unique features that helped spark the Renaissance and inspire artists and engineers across Europe. Brunelleschi's dome pushed the limits of what architecture could achieve by using new techniques to reduce the weight of a massive structure; Giotto's bell tower used geometric symmetry to create a classically beautiful structure; and Ghiberti's doors re-introduced spatial realism to Italian art! Together, these created the foundations of Renaissance thinking.

The Implications & Consequences of the Trial of Veronese

The Architecture of the Church of San Giorgio Maggiore

The Treaty of Lodi: Borders, Peace & Balance of Power

Decline of Muslim Rule in the Iberian Peninsula

The Ideal of the Circle in Renaissance Art

The Architecture of the Early Christian Church

The Development of Rococo Architecture in Germany