After watching this video, you will be able to explain what oceans, seas and gulfs are and point out some of the most well-known ones on a world map. A short quiz will follow. Updated: 10/27/2020
Create an account

The Earth has been described as the 'blue planet' - a blue dot in space. That's because while there is a lot of land here, there is far more water. Seventy-one percent of the Earth's surface is covered by water, and it is vital for all life on Earth. Without water, we wouldn't exist. Neither would the plants or the animals. Maybe somewhere in the universe life exists that doesn't need water, but right now, we can't imagine how that would be possible.

An ocean is 'a very large expanse of seawater, especially between continents'. A sea, on the other hand, is 'any expanse of salt water'. But why do we call some things 'oceans' and some things 'seas'? Well, that's usually determined by the land. If the water is partially enclosed by land, it's usually called a 'sea', and if it isn't very enclosed, it's considered an 'ocean'. A gulf is 'a deep inlet of the sea almost surrounded by land, with a narrow mouth'. A gulf is mostly enclosed by land, but a sea is not quite so enclosed. However, unfortunately, this isn't an exact science - there area seas, like the Black Sea, for example, that are completely enclosed. As usual, humans aren't always very consistent. 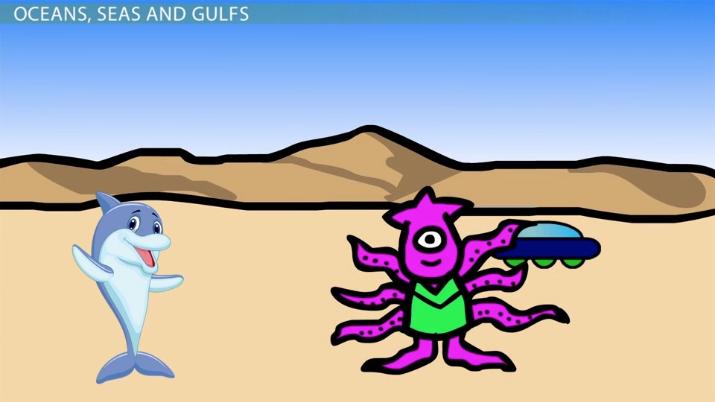 It's important to be able to name and locate all the major bodies of water on a world map. So, let's go through them, starting with the oceans.

Now we can get smaller: seas and gulfs. There are at least 97 bodies of water with the name 'sea' and another 17 or so 'gulfs.' We couldn't possibly go through them all, but here are a few of the most well-known ones. The Adriatic Sea is between Italy and Croatia, and the Caribbean Sea is just north of South America. The North Sea is north of Europe between the UK and Norway. And the Gulf of Mexico is the gulf that's east of Mexico below the southeast states in the U.S. The Persian Gulf is between Saudi Arabia and Iran, and the Red Sea is to the west of Saudi Arabia bordering Egypt, Sudan and Ethiopia. In the Pacific, you might have heard of the South China Sea, which has coasts in Vietnam and southeast China , or the Tasman Sea between Australia and New Zealand. And, as I mentioned, there are a few fully enclosed so-called seas (four in all), like the Caspian Sea (which lies between Kazakhstan, Iran and Russia), the Black Sea (between the Ukraine and Turkey) and the Dead Sea (between Israel and Jordan). Based on these names, you can probably conclude that enclosed seas are depressing places.

So, there you have it: some of the most famous oceans, gulfs and seas in the world. If you know where all of these are and can point them out on a map, you're doing pretty well.

Seventy-one percent of the Earth's surface is covered by water, and it is vital for all life on Earth. Without water, we wouldn't exist; neither would the plants or the animals. Water is everything, and water on Earth is found mostly in oceans, seas and gulfs. An ocean is a very large expanse of seawater, especially between continents. A sea, on the other hand, is any expanse of salt water.

The Atlantic Ocean can be found between the U.S. and Europe/Africa, and the Pacific Ocean between the U.S. and Asia. The Arctic Ocean is in the north, and the Southern Ocean is in the south. Then last of all there's the Indian Ocean, south of India. Those are the biggest named bodies of water in the world. There are at least 97 bodies of water with the name sea and another 17 or so gulfs.

So, there are the most famous oceans, gulfs and seas in the world. If you know where all of those are, you're doing pretty well.

After watching this lesson, you should be able to classify different bodies of water and recognize their locations on a map.

The Muscular System Lesson for Kids

Types of Eclipses | What is an Eclipse?

Identifying the Continents & Oceans of the World

Differences of the Northern and Southern Hemispheres Lesson for Kids

Seasons in India Lesson for Kids

Types of Landforms: Lesson for Kids

The Aryans in the Indus Valley: Texts, Castes & Beliefs

Parts of a Map Lesson for Kids

What is a Balanced Diet? | Balanced Meal Examples

What is the Hydrosphere? - Definition & Examples