Whether it's at your workplace, on a group project, or with a group of volunteers, sometimes it's really helpful to have a meeting or form a planning team. This way, everyone gets up to date at the same time, and you can make sure you are all working toward a common goal. Many governments form teams and committees for this express purpose. In Spain, an entire council is devoted toward the important sectors of economy and labor relations. In this lesson, we will discover the history, duties, and functions of Spain's Economic and Social Council. 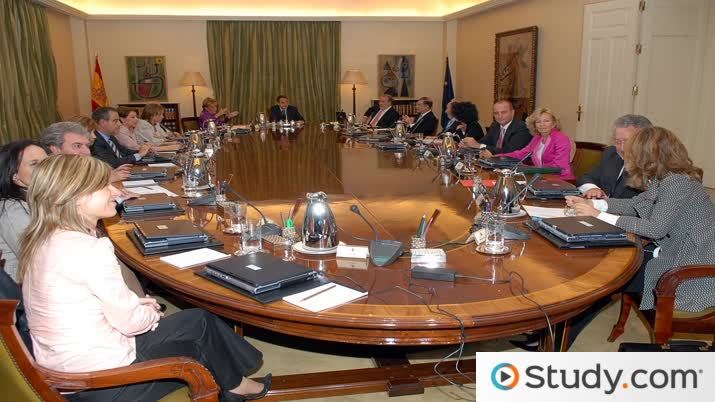 Coming up next: Committee on Public Accounts of Spain

Together, the council members are required to provide a report and opinion on any legislation that affects workers, labor laws, and employers - virtually anything to do with the economy and the labor pool. The Council is also required to supply this opinion to any law enacted by presidential or executive decree that affects the same areas. And, the Council also must provide an opinion on legislation or presidential decrees that attempt to modify the composition or functions of the Council itself, such as removing the Council President from office or expanding the Council's purview.

Additionally, any member of the Spanish legislature can refer a bill or part of a bill to be reviewed by the Council at any time. Bills that representatives can refer to the Council can vary widely, from bills regarding labor relations to bills regarding the environment or fisheries management. The Council is also an entirely independent organization, largely charged with policing itself and constructing its own internal protocols and organizational structure. Finally, and perhaps most importantly, the Council is charged with drafting, in the first five months of each year, an annual report to the Spanish government detailing the health of Spain's economy and labor force.

The Economic and Social Council of Spain is an important factor in helping the Spanish government make informed decisions in regards to labor law and other bills affecting the economy. The panel's members are appointed equally from employer and labor groups from across the economy. While the majority are from the country's major labor unions and employer groups, there are delegates appointed especially from various important sectors of the Spanish economy, such as fisheries and farming.

The Council is charged with giving its expert opinion on any law in Spain that could affect labor relations or the economy. This, of course, can include a wide and varied set of bills and laws, and the Council has various committees containing experts on each particular subject. An entirely independent organization, the Council is in charge of providing expert advice on the ramifications of the Spanish government's various bills and laws on the Spanish economy and labor relations.

Once you are done with this lesson you should be able to:

The Economic and Social Council of Spain
Related Study Materials

How to Use Context to Determine the Meaning of Words

Nominating a Presidential Candidate: The Process & Its Strengths & Weaknesses

Stopping by Woods on a Snowy Evening by Robert Frost | Summary, Analysis & Theme

Stamen Function & Parts | What is the Stamen of a Flower?

The British Parliament: House of Lords & House of Commons

What is Humidity? - Definition, Measurements & Effects