Slavery caused an ethical and economically challenging issue for the nation of America when the economics behind it created a financial dependency while the need for the abolishment of this practice arose. Learn more about the economics of slavery, the rise of cotton as a commodity, and the ensuing national dependence that slavery caused. Updated: 12/13/2021
Create an account

Beginning of Slavery in the U.S.

You're probably familiar with the institution of slavery that existed in the United States, but do you know when and how it got its start?

In 1619, a Dutch trading ship arrived in Virginia with the first Africans to step foot in the English colonies. You may be interested to know that these Africans were not originally enslaved. Instead, they were treated more like indentured servants. During the 1600s, indentured servitude was a way for many people to get to the New World. In exchange for passage across the Atlantic, they agreed to be an unpaid laborer or servant for a given period of time (usually about seven years).

By the end of the 1600s and into the early 1700s, there were fewer and fewer indentured servants in the colonies. This posed a major problem for plantation owners, especially in the Virginia colony. Large-scale production of tobacco required a lot of inexpensive manpower for the industry to be profitable. To meet the demand for cheap labor, the early colonists turned to African slavery. Within just a few short decades, slavery transformed the U.S. economy. 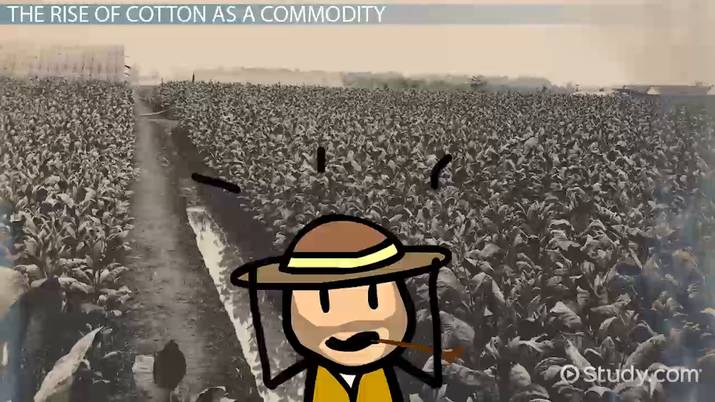 The Rise of Cotton as a Commodity

In the early English colonies, tobacco was one of the most popular and profitable crops to grow. Unfortunately, widespread tobacco production soon became problematic. As the soil was stripped of nutrients from planting the same thing over and over, it became increasingly difficult to keep growing tobacco on the same plantations. Southern farmers began to panic. What would they do without such a valuable cash crop?

In 1793, their fears were put to rest with a revolutionary invention. Some farmers in the South grew cotton but not on a massive scale. Cotton took a long time to clean, and as a result was not very profitable to grow. Eli Whitney's invention of the cotton gin made it possible to quickly and easily separate the cotton fibers from the seeds, which sped up the initial processing phase immensely.

Shortly thereafter, the Southern economy changed rapidly. Tobacco was no longer the most important cash crop. Instead, cotton became ''king'' in the South. This transition made slavery more important than ever to Southern growers.

Slavery made the large-scale production of cotton possible. Not only that, it created a national dependence on the commodity. Thanks to the labor of countless thousands of enslaved people, the South became the largest cotton producer in the world. By 1840, the U.S. produced over 50% of the world's cotton.

Just like with tobacco, growing cotton eventually proved problematic. Soil depletion made it more difficult to grow cotton. This forced plantation owners to increase their enslaved laborers to keep production up. This created further economic dependency on the institution of slavery.

The free labor of enslaved people helped Southern planters grow wealthy, but it also contributed to economic growth around the country. By the mid-1800s, the North did not have a direct dependence on slavery, but they did rely on it indirectly. Cotton grown in states like South Carolina and Georgia was spun into thread and woven into fabric in textile mills in states like Massachusetts. Merchants exported cotton to England through Northern ports like Philadelphia and Boston. Meanwhile, Northern bankers loaned Southern planters money to buy more land and to buy more enslaved people to further support the cotton industry. Plantations often used their enslaved population as collateral to secure loans to buy additional enslaved people.

While plantation owners certainly benefited from the institution of slavery, slavery had a number of negative effects on the country's economy. Slavery made it virtually impossible for small farmers, artisans, and craftsmen to succeed in the South. They simply couldn't compete with the massive source of free labor at the disposal of rich planters.

Slavery also made it difficult for the South to diversify. The Southern economy rested on top of a handful of cash crops. If the demand for those crops disappeared or if production faltered, then the whole country could suffer.

The first Africans arrived in the Virginia colony in 1619 as indentured servants, which were unpaid workers laboring in exchange for passage across the Atlantic for a contracted period, usually around seven years. In the decades following, the number of indentured servants in the colonies began to drop, leading to an increased demand for inexpensive labor. Within just a few short decades after the arrival of the first Africans, slavery became an important institution in the United States.

Originally, enslaved people were used on tobacco plantations and other farms that grew cash crops. As tobacco production struggled, the cotton industry began to boom after the invention in 1793 of the cotton gin, which was a machine that made it possible to quickly and easily separate the cotton fibers from the seeds, which sped up the initial processing phase immensely. The growth of ''king cotton'' led to increased reliance on slavery in the South. Slavery had an economic impact on the North, whose mills were used to process the cotton. Merchants exported the cotton through Northern ports, and Northern bankers made loans to planters to purchase more land and more enslaved people.

Slavery had a number of negative economic effects on the country: it created a reliance on a handful of cash crops, limited the ability of small farmers, artisans and craftsmen to compete in the economy, and made it difficult for the Southern economy to diversify.

The Impacts of Anti-Slavery Petitions to Congress

The Constitution of the United States | Summary, History & Analysis

Mexican-American War Causes & History | What is the Treaty of Hidalgo?