Gender can have a profound effect on how people acquire, use, and think about language. This lesson presents and discusses some of the ways that gender can impact how language is acquired. Updated: 07/27/2020
Create an account

When you look around, you might notice that, for the most part, masculinity and femininity are represented in a number of different ways. From the way people dress, to how they wear their hair, all of these choices are sending a message about their own relationship to the social construct of gender, or how a person identifies themselves in relation to the categories of man and woman. Gender is so tied to how we express ourselves that it can even impact the words we use every day!

This may come as a surprise. At first, gender might seem irrelevant to language. However, researchers have repeatedly demonstrated a strong relationship between gender and how language is acquired, developed, and used. Gender seems to have an impact on language development even in very different historical and cultural contexts. 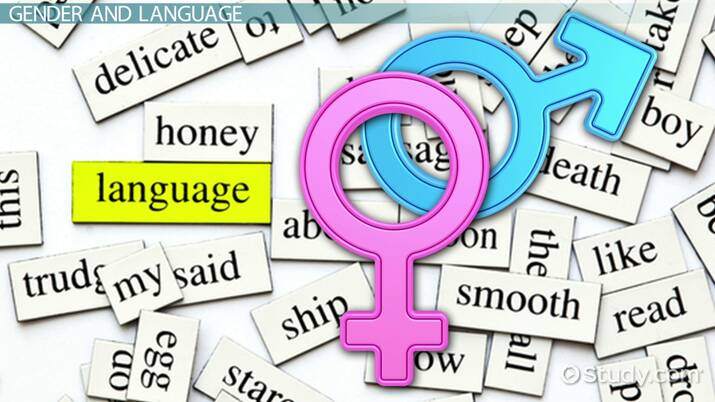 Coming up next: The Effects of Education & Socioeconomic Status on Language

First of all, gender can play an important part in language acquisition, or how young children learn their native language. In many societies, babies and toddlers spend more time with female caregivers, so early language is often initially mimicked from a female speaker.

On average, girls also learn to read slightly earlier than boys, but this too evens out in middle childhood. Nonetheless, throughout the lifespan, women tend to perform slightly higher than men on average on tests measuring verbal acuity and performance.

There are some significant differences in how language develops and how people tend to express themselves based on gender.

For example, as a whole, women tend to use language more relationally, or in the context of close relationships with others. Women also tend to have a wider-range of emotional vocabulary, using language more readily to describe their feelings and emotional states.

Men, on the other hand, tend to use language more assertively and are more likely to suppress, or hold back, their emotions. As a result, men tend to not express their emotions through language. It's important to note that this is a generalization and is by no means applicable to all men and women worldwide.

The ways men and women use language also vary depending on the language in question. For instance, some studies note that female speakers of Chinese speak more quietly and in a more passive voice than male speakers. These differences have not been documented consistently in other languages.

How to Make Sense of Differences

This raises an important question: why does gender play such a big role in how people acquire, develop, and express themselves through language? There are several different perspectives on this question.

Some people maintain that there is a biological difference between men and women that impacts neurological development, and thus, leads men and women to acquire and use language differently. This is an essentialist view, meaning that the differences between men and women are considered to be innate and irrevocable. general, researchers have moved away from this perspective over the last century, though some still argue for the significance of biology in gender effects on language.

Socialization, or how males and females are explicitly and implicitly taught to behave, probably plays a substantial role in language differences across genders. For example, little girls might be encouraged from infancy to use words to express their emotions, whereas boys may be encouraged to suppress feelings and talk about scientific ideas or objects more readily. This process of socialization sometimes happens unconsciously, without caregiver awareness. However, it can make a major difference in language development and usage.

Cultural and geographic differences play a significant role in how gender affects language. For example, in cultures where women are expected to be more passive, girls are taught explicitly to use minimizing phrases, such as tag questions, softer language, and facial expressions and body language to express stronger emotions.

Cultures and societies that emphasize gender equity are more likely to try to actively minimize the differences in gender's impact on language. This can be hard to do because of the deeply embedded stereotypes and norms that exist in many cultures.

When we think about the different ways we learn and use language, we can see that there are many different factors at play. Gender is a category of identity that can make a profound difference in the relationships we form to language over time.

First, gender affects language acquisition, or how young children learn their native language, with girls more likely to use language relationally than boys (this means in the context of close relationships with others). Women are also slightly more verbally oriented overall and outperform men across the lifespan on most verbal measures.

There are also substantial differences between genders in how we develop and use language. These differences can be explained in an essentialist way, meaning that the differences between men and women are considered to be innate and irrevocable. On the other end, we can understand these differences based on socialization, or how males and females are explicitly and implicitly taught to behave. Finally, it's important to remember that the effect of gender on language can vary depending on the society and culture in question.

The Effects of Gender on Language
Related Study Materials

The Social & Cultural Functions of Language

Variations in Language Across Cultures

An Ounce of Cure by Alice Munro: Themes & Literary Devices

What is a Lingua Franca? - Definition & Examples