For companies, a miscount of inventory can be a serious issue. In this lesson we'll look at the effects of inventory errors on companies, both with respect to profits and how the error should be recorded. Updated: 10/15/2019
Create an account

What is an Inventory Error?

Imagine for a second that you are running a business, trying to figure out how much of what goods you have in stock. Your warehouse manager still uses handwritten notes and you can't quite make out the difference between 180,000 and 100,000 units. Either way, you're at risk of having an inventory error, a situation that emerges when what you think you have in inventory doesn't match up with what is actually there. As you can imagine, these are particularly devastating to businesses. In this lesson, we'll look at two major types of inventory errors, namely overstatements and understatements, as well as learning what the impacts of an inventory error is on an income statement and a balance sheet. 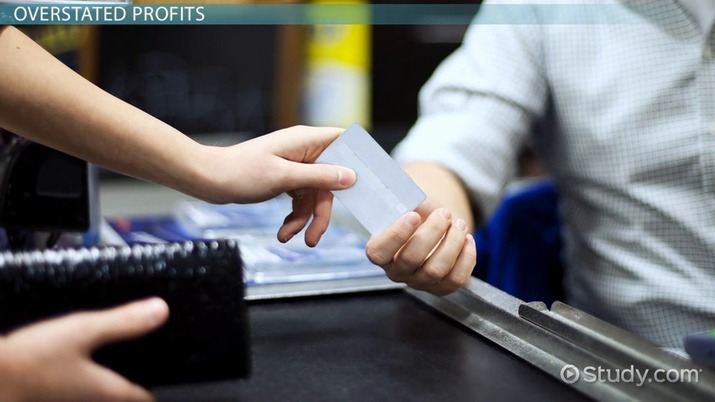 Coming up next: Net Realizable Value of Inventory: Definition & Method

Before we go any further, let's take a look at some of the most common causes for inventory errors. As you can imagine, there are plenty. First of all, you could have simply miscounted. Now, that's not as simple as it sounds. As an addition to sheer error, there could also be the chance that some units were double counted or simply ignored. Think about it like this: if you have a client who doesn't always pick up their orders on time, then they may end up having their goods counted in your inventory. Other causes for errors exist, many of which are much more mundane. Chances are you had to convert between different units, such as pounds to kilograms or gallons to liters. Many organizations have different units for counting different goods. A pallet may be used to count some goods but not others. As a result, someone could count pallets when they really should have counted tons.

Of the two categories of inventory errors, perhaps the most dangerous to a business is one that results in overstated profits, where the inventory report states that the company should have made more money than it actually did. These overstated inventory reports can come about in a variety of ways, all of which are errors within inventory.

Let's say that you underestimated the number of goods you started with. Because of this underestimation, you think you bought less units than you actually did, leading to an overstatement of profits. By the same token, thinking that you processed more goods over the course of a term could also lead to an inventory error as you think you've had more and more goods moved through inventory. As a result, you would, again, end up with an overstated profit.

While overstated profits are horrible, understated profits are also particularly bad. After all, if you can't keep track of your money, then you're likely very inefficient in other aspects of the business as well. As you might expect, many of these problems are the inverse of the overstated issues from earlier. For example, if you think you have more goods than you actually have at the beginning of a sales term, you may think that fewer goods have moved through the whole process. That leads to an understatement of profits. Likewise, thinking that you have more goods in stock after a sales period could also lead you to think that you sold less than you did, leading to understated profits.

Once an inventory error has been discovered, it has to be corrected on the income statement, if not the balance sheet. Many of the above errors end up being found on the income statement. A notation must be made to address the error as quickly as possible. Otherwise, as you'd expect, the error becomes first in a series of dominos that require later attention. The good news is, however, that if the owner of the goods in question accurately finds the error, and adjusts it on other forms, no notation needs to be made on the balance sheet for that accounting period. Of course, if the error is not found, then the assets will still be shown as either overstated or understated.

What is Consumer Market? - Definition & Example

What Is the Buying Process in Marketing? - Stages & Overview

What is an External Environment in Business? - Definition, Types & Factors

What is the Communication Process? - Definition & Steps