Emperor Augustus was one of the most influential leaders in Roman history, overseeing the nation's transition from republic to empire. Explore his childhood as Octavius and his relationship with his famous uncle, discover his time as the First Citizen, and review facts about his achievements and legacy. Updated: 10/12/2021
Create an account

How many stories about great people come from relatively humble roots? From the fairy tales we tell children to the hero movies we watch as adults, there's something about a kid who just makes it big. Augustus was just that type of kid. Named Octavius at birth in 63 BC, the boy had a pretty average life. He was born into a family that was well off, but by no means famous or influential. In fact, most who heard about the birth of the boy would have expected Octavius to quietly live out his days as a farmer, owning a few slaves and perhaps achieving some local political office. However, Octavius's father died when he was four, and his step-father really didn't care for him. So he was sent to live with his grandmother, Julia Caesaris. 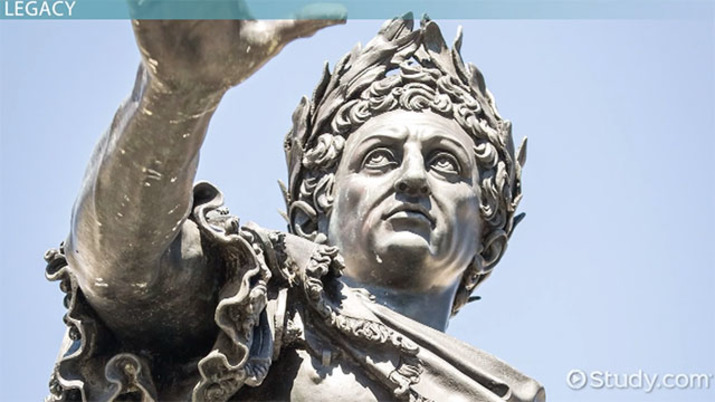 Coming up next: The Roman Aqueduct: Definition & Facts

If that name sounds familiar, there's good reason. Julia's brother was none other than Julius Caesar, and he was the most electrifying person in Rome. Caesar practically ruled Rome by this time through an arrangement known as the First Triumvirate, in which Caesar and two other men shared control of the city and its provincial holdings across the Mediterranean. Caesar brought control of the people to this enterprise, since he was literally the most popular person around. In today's politics, it's hard to imagine someone as universally popular. In fact, the closest analogy possible is a Super Bowl winning quarterback. His popularity came as a result of his impressive military abilities because he had conquered new lands for Rome.

Finally, on one of these campaigns, Octavius met up with his great-uncle. Swimming for his life after being shipwrecked, Octavius crossed enemy territory to find Julius Caesar in 46 BC. Needless to say, this impressed Caesar, who immediately made Octavius his heir. In other ways, too, was Octavius gaining the admiration of his uncle. Unfortunately for Caesar, Octavius would inherit Julius Caesar's estate only two years later. Caesar was assassinated in the Senate on March 15, 44 BC.

Becoming Caesar's financial heir was easy. Becoming his political heir was much more difficult. Others hungry for power began to try to fight Octavius, but the young man arranged a Second Triumvirate made up of men loyal to Caesar's memory to punish those whom had assassinated Julius Caesar. However, this soon collapsed when another member of the Triumvirate, Marc Antony, tried to prove himself to be Caesar's true political heir and allied with Cleopatra of Egypt to gain the power to defeat Octavius. After a civil war, Octavius emerged victorious and returned to Rome.

This return to Rome put the Roman Senate in a quandary. For more than 500 years, they had claimed to rule Rome. In fact, they had killed Julius Caesar because he was simply too popular. Now his nephew returned with the respect of every soldier in Rome - the Senate could not hope to do away with him so easily. However, Octavius was aware of the reason that his uncle had been killed as well. As such, he gave control of the army and the new provinces back to the Senate. Still, the Senate knew that they had to keep Octavius happy, or he'd destroy them. As a result, the Senate gave Octavius many powers, including the title of Princips Civitatis, or First Citizen of the State. Moreover, the Senate gave him the title of Augustus, which is how most people know him today.

Now, let's clear up a common misconception. If you ask a lot of people who the first Emperor of Rome was, they'll say Augustus. However, this idea of being Emperor was distinct from what we think of when we think of, say, a king. In order to rule, the Emperor actually had a number of titles. He had permission from the Senate and greater Roman bureaucracy as manifested by the titles Princips Civitatis and Consul, while the religious authorities gave their blessing by naming the individual Pontifex Maximus, or head priest. The military gave him the title Imperator, meaning supreme commander, and it is this title of Imperator that has stuck with us today. However, for much of the so-called Imperial period, a Roman Emperor had to have all of those titles to be considered the legitimate ruler.

Augustus's greatest accomplishment is that he brought peace to a Roman state that had been war-torn for decades. However, that peace was only within the boundaries of Rome. At its edges, he offered expansion. In defeating Antony, he had captured Egypt, one of the richest parts of the known world. He also expanded east until he met the Persian Empire, signing a peace treaty with the only power that could challenge Rome. Elsewhere, he met varying success. He expanded into the Balkans, but was stymied in his advances into Germany.

On the home front, Augustus began to shift towards a much more bureaucratic form of civil service. For starters, he appointed a professional group of bodyguards for himself known as the Praetorian Guard. In the past, Rome had largely let provinces pay predetermined amounts of tax while letting the local rulers grow rich off of over-taxation. Augustus changed that; he appointed people to collect specific amounts of tax determined by the wealth of the province in question. Of course, that sort of taxation required knowledge of what was in a given province, which is why the Book of Luke talks about a census that was to be carried out - this is the reason that Christians believe Joseph and Mary left Nazareth for Bethlehem, the birthplace of Jesus.

Augustus is remembered for much more than simply being the ruler who ordered the census at the birth of Jesus. He effectively created the idea of rule by one man over the whole of Rome's domains. He also elevated the Caesar family from one of modest wealth to the most prestigious family in all of Rome. In fact, the word Caesar became the inspiration for the word for Emperor in many languages, ranging from an additional title of Roman rulers to the German Kaisers and Russian Tsars. In history, he is remembered as one of the most able of Roman leaders. However, his real quality is perhaps revealed in a blessing given to later Roman emperors. Upon coronation, it was asked that the new emperor be as great as Augustus. In the Roman mind, no one had done for Rome as much as Augustus did.

In this lesson, we looked at the life of Augustus. Despite a rough childhood as the boy Octavius, during which he was ultimately sent to live with his grandmother, he would triumph over obstacles until he eclipsed the reputation of his uncle Julius Caesar. Earning the title Augustus from the Senate, he became the first person to hold all the titles that would define someone as being the Roman Emperor, as well as building an incredible legacy both at home and abroad.

Clovis I History & Reign | Who were the Franks?

The Five Good Emperors of Rome & the Nervan-Antonine Dynasty