Solar radiation is harmful in high amounts, but thanks to energy transfer, the atmosphere protects us. See how energy is transferred in general through conducting, convection, and radiation, and learn types of radiant energy contributing to Earth's temperature. Updated: 11/10/2021
Create an account

The Source of All Energy

We take sunlight for granted, but we really shouldn't because essentially all energy on Earth comes from that big, bright star in the center of our solar system. And while we're at it, we should also give a shout-out to our atmosphere, because it absorbs some of that sunlight before it reaches us, as well as traps some of it for safe-keeping on the planet. This is an important balance - too much sunlight and Earth is too hot to live on, too little sunlight and Earth is not warm enough. 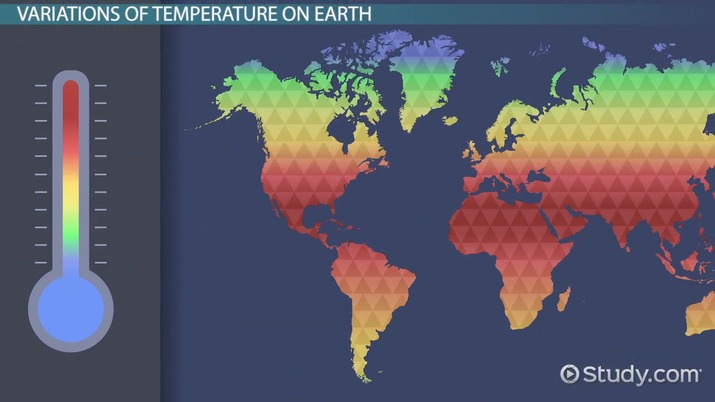 How Energy Is Transferred

What does pass through the atmosphere provides energy in many different forms, but before we get ahead of ourselves let's review the different ways that energy is transferred. When I was growing up, I listened to a band named CCR, which stands for Credence Clearwater Revival. And when I think of CCR I also think of energy transfer, because the three ways that energy is transferred between objects is also CCR: conduction, convection, and radiation! Even if you're not a classic rock fan you've got to admit that's pretty catchy!

Convection is when energy is transferred via currents in a fluid. This fluid could be a liquid or a gas, but the process is the same either way. When heat is applied to the fluid, the molecules near the heat become excited, spread apart, and become less dense so they are buoyed upward. When they cool, they fall back down again creating a cell-shaped current path.

Radiation is when energy is transferred in the form of electromagnetic waves. Think about sitting next to a campfire and feeling the welcome heat radiate from it to you - that's radiation! Radio waves, light waves, and heat waves can all travel like this, moving from one place to another without the help of any materials.

Let's put together what we know so far. First, we know that the energy comes from the sun, travels through space, then through our atmosphere, and finally reaches Earth's surface. We also know that this energy does not travel through any materials as it travels from the sun to the earth. If we put these two things together, we can deduce that it therefore must travel by radiation, and because of this we call it solar radiation. Energy that is emitted from the earth is called terrestrial radiation.

There is a flip side to this though, because all objects also absorb energy. The relationship here is the same as before; objects that are good at emitting radiant energy are also good at absorbing radiant energy. The earth is clearly not as good as the sun at emitting energy, which means it also can't absorb as much energy as it receives. And this is where the atmosphere becomes really important.

The atmosphere does let in radiation, but also acts as a blanket to keep much of it trapped on Earth, which keeps the planet warm. However, if the gases in the atmosphere become too abundant they may trap too much heat on Earth. These gases act like the walls of a greenhouse, which is why they are called greenhouse gases. But like a greenhouse, if there is no escape for the excess heat, then too much heat is trapped inside, and this can have detrimental effects on that temperature balance mentioned before.

Variations of Temperature on Earth

You're probably already aware that the earth is not warmed in the same way across its entire surface. Otherwise, the North Pole would be a hot tourist spot and Cancun would be just another city in Mexico. There's a few reasons for this unequal warming of Earth's surface.

You can do this at home with a flashlight. Point your flashlight directly at a wall, holding it a right angle. There should be a nice bright circle concentrated right where you are pointing your light. Now tip the flashlight to different angles so that the light is not at a right angle. You'll notice that the light spreads out into an ellipse and covers a larger area of the wall. You are directing the same amount of light at the wall in both cases, but the amount of light that hits that same spot is very different!

Another reason that temperatures vary across Earth is due to convection currents. Remember those from earlier? Heat is redistributed across Earth's surface through cell-like circulation currents of air. These currents are also responsible for the different types of environments we see across the planet. If you look on a map, you'll notice that rainy, tropical areas tend to align across a specific region of the earth, as do the large deserts and polar regions.

All objects both emit and absorb radiant energy, but some are better than others. The earth receives a lot of energy from the sun, but it can only absorb so much and requires a little help from the atmosphere to keep it here. However, when the gases in the atmosphere become too abundant, they 'help' too much and trap more heat on Earth than is good for it.

Solar radiation doesn't reach Earth the same in all places. When it hits the earth at right angles, like it does along the equator, the energy is direct and much more concentrated than when it hits the earth at less direct angles, like it does in the polar regions. The same amount of energy is spread over a larger area, so it is not warmed as much. Air currents also form cells around Earth, transferring energy from one place to another and create unique regions like the tropics, the world's great deserts, and the poles.

Solar Energy Concept & Effects | How Does the Sun Heat the Earth?