Death is inevitable, but many causes of death of preventable. In this lesson, explore policies to reduce mortality rates, and test your understanding with a brief quiz.
Create an account

Did you hear about the latest research in mortality? According to scientists, the current percentage of the population at risk of eventually dying is 100%. As it turns out, 100% of all people in the past had this same risk of death and well, look what happened to them. Mortality is not something we can hide from. Death is an inevitable part of life, so we can't stop it. But, we can learn from it and we can try to make sure that people aren't dying unnecessarily.

Around the world, nations and intergovernmental organizations are developing mortality policies: programs to reduce death rates of specific groups that are caused by preventable factors, such as poverty or curable disease. Yes, the final outcome is the same for everyone but we can still make sure that people take their time getting there. 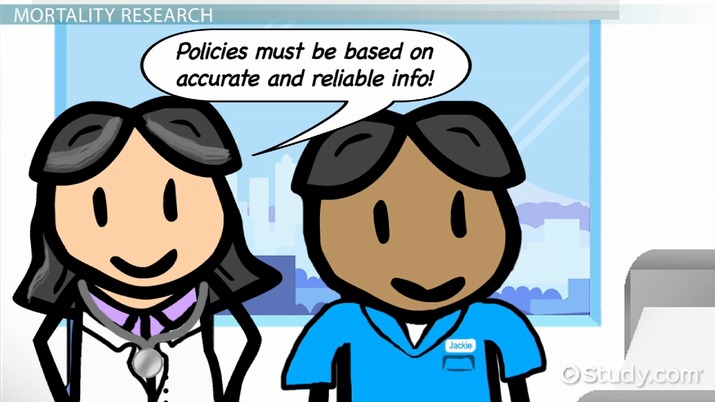 What are the leading causes of death for diverse areas and segments of the population? What underlying factors could cause high mortality rates in a specific population? Are those factors realistically preventable? What strategies have been tried in the past? Those are the types of questions researchers try to answer.

One of the best ways of researching mortality rates is simply to keep good records. In recent years, governments and private health organizations alike have poured millions of dollars into improving record keeping systems around the world and the results are dramatic. In India, for example, improved records helped identify that some populations were actually at lower risk than assumed. By realizing this, the government was able to redirect some resources to populations that needed them more.

Now, let's look at some specific mortality policies. Many modern policies on reducing mortality are targeted at especially vulnerable populations, such as the homeless and poverty stricken or those with little access to healthcare. One of the most targeted groups however, is infants. Newborns have a naturally high risk of death and the majority of these risks are preventable. How do we prevent them? Effective policies include a mixture of access to newborn health screenings to detect early problems and simple education.

A startling number of parents around the world do not know the factors that can increase the risk of SIDS, Sudden Infant Death Syndrome, simply because the information is not available. These practices alone are extremely easy to implement and many international organizations are pushing for them to be labeled as a human right. By making newborn health care an ethical issue, it puts pressure on governments to formally adopt policies to make this more available to the population.

One of the other biggest focuses of modern mortality policies is in maternal mortality, or death rates for women caused by complications from pregnancy. Historically, pregnancy has been the leading cause of death for women. Today, this is an era where we see some of the greatest differences in areas with and without policies to help pregnant mothers.

For example, in Sub-Saharan Africa, a region with poor maternal healthcare, 1 in 26 women is estimated to die in childbirth. In areas with fully developed healthcare, the rate is 1 in 7,300. That alone shows what a difference these policies can make and again, simple changes can go a long way.

Access to birth control to prevent pregnancies, educating pregnant mothers about health risks and concerns, and improving access to public healthcare focused on maternal issues, have all been proven to drastically reduce maternal mortality. For example, when these simple, low-cost measures were implemented in Tanzania, maternal mortality decreased by 80% over a 4-year period. That is a major change.

There is one other policy that can reduce maternal mortality but frankly, it's one of the most hotly debated ethical issues in the world today: abortion, or the medical termination of a pregnancy. Many people oppose abortion on moral or religious grounds but lately research has discovered something startling: the rates of abortion are almost exactly the same in areas where abortion is legal versus illegal. Making abortion illegal does not seem to prevent it from happening. The only difference is that in places where abortion is illegal, the rates of maternal mortality are drastically higher.

According to the World Health Organization, up to 20 million medically unsafe abortions happen every year, resulting in the deaths of roughly 68,000 women and permanent injuries to another 5 million. We see the results of legalizing abortion in places like Tunisia. Despite an economy, average lifespan, and access to other health services practically identical to its neighbors, Tunisia has roughly 50% lower maternal mortality rate. Why? Because abortions are performed by medically trained professionals.

So despite how many people feel about abortion in terms of personal ethics, most international organizations are also pushing for legalizing abortion as a fundamental human right in order to protect the lives of women around the world. It's not always an easy topic to talk about but the numbers speak for themselves.

Everyone dies eventually, so what's the point of introducing mortality policies, programs to reduce death rates of specific groups? Well, so many causes of death are preventable and reducing the number of preventable deaths gives everyone a better chance at a long and happy life.

But there are ethical concerns. One of the fundamental ethical guidelines for creating mortality policies is to be informed. Mortality research and record keeping helps policy makers make informed decisions since people's lives could depend on the outcome. Many mortality polices are focused on infants, since this population is naturally high risk. Effective and ethical policies include increasing access to infant health care and access to education about infant specific risks.

Maternal mortality, or rates of death due to pregnancy and childbirth, is another major focus since it to is largely preventable. Education, birth control, and appropriate healthcare are accepted and effective policies but the most debated issue is abortion, the medical termination of a pregnancy. Many oppose abortion on moral grounds but studies show that making it illegal does not reduce its occurrence. It just puts women at greater risk of dying from it.

Whatever the policy, mortality is something that is both inevitable and preventable; we just like to postpone it for as long as we can.