Meg has taught language arts in middle school, high school and college. She has a doctorate in Educational leadership

This lesson will familiarize the reader with the setting, plot, and characters of 'The Eve of St. Agnes' by John Keats. Readers will also learn about literary elements of the poem such as imagery, language, and form.
Create an account

'The Eve of St Agnes' is a long, romantic poem by John Keats. Keats died at the tender age of 25 in 1821, but somehow, despite the suffering from the ravages of tuberculosis, Keats managed to produce 54 poems during a brief six-year career. He is regarded as a well-established English poet and part of the Romantic poets.

The Romantic poets ushered in a new type of poetry in the late 1700s and early 1800s. Romantic poetry is characterized by an interest in supernatural events, appreciation of nature, vivid imagery and striking contrasts. 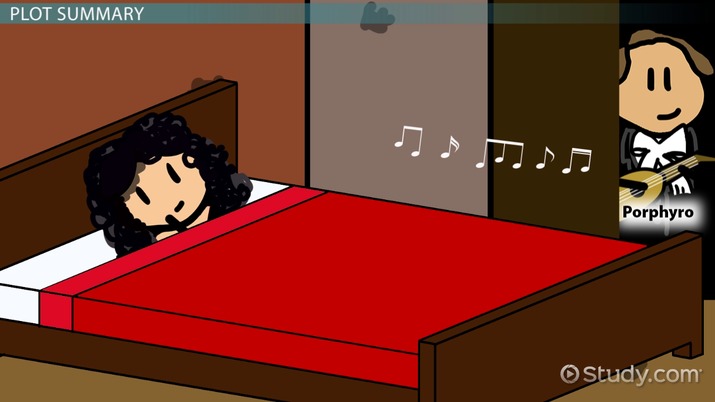 Try it now
Back
Coming up next: The Song of Hiawatha by Henry Wadsworth Longfellow: Summary & Analysis

'The Eve of St. Agnes' opens in a cold, dimly lit medieval church where a beadsman is going about his work, conducting prayers. A beadsman is someone who prays for another person's soul in exchange for money. Other than to establish a mysterious setting and possibly symbolize old age, the beadsman is not particularly important in this poem.

The date is significant. It is January 20th, the Eve of St Agnes. St. Agnes is the patron saint of virgins, rape victims, young women, and engaged couples who was martyred on this day nearly 2,000 years ago. According to legend, young women may dream about their future husbands on this night. Madeline is a beautiful young woman passionately in love with Porphyro. Eager to dream about Porphyro, she fasts, removes her clothing and lies naked under the bedclothes in the freezing cold castle, in accordance with the established ritual.

Meanwhile, Madeline's lover Porphyro travels across the windy, dark moors to meet her. He and Madeline are very much in love, but their two families are at war with each other -- this may remind you of the plot in Shakespeare's Romeo and Juliet. Passionate, young Porphryo breaks into the castle at great personal risk, but it's a very big castle, and he is not sure how to find Madeline. If he is caught, he will be in serious trouble.

Luckily, Porphyro gets some help from a very old servant, Angela. She is sympathetic to the lovers' plight and helps him find the way to Madeline's chamber. He hides in the closet and for several stanzas watches her sleep and dream.

Madeline awakes when Porphyro plays a song for her on a lute. She wakes up thinking he is part of her dream. He promises her a home, and she proclaims her ardent love for him. They run away together never to be heard from again. In the final stanzas, both the beadsman and Angela die, presumably of old age.

At 42 stanzas, the poem seems long by today's standards. However, readers in the 1820s liked to be entertained just as they do today, and longer poems were actually more popular, probably because they had more lasting entertainment value. Although Keats' poetry wasn't exactly considered to be popular culture, it had merit both as entertainment and as literature.

As entertainment, the poem has romance and an engaging plot. Keats creates suspense in the following lines as Porphyro and Madeline narrowly slip past the drunken household staff and the guard dog:

Like phantoms, to the iron porch, they glide;
Where lay the Porter, in uneasy sprawl
With a huge empty flaggon by his side:
The wakeful bloodhound rose, and shook his hide,
But his sagacious eye an inmate owns:
By one, and one, the bolts full easy slide:--
The chains lie silent on the footworn stones;--
The key turns, and the door upon its hinges groans.

The lines that describe the guard dog may seem a little unclear. What does the poet mean by 'But his sagacious eye an inmate owns?' In any case, the lovers escaped and readers might do well to remember ambiguous language is often a feature of Romantic poetry.

However, there were no movie theaters or special effects. Readers had to imagine for themselves what the characters were feeling and experiencing from the language:

Keats takes several stanzas to lead up to Porphyro and Madeline's sexual encounter. In these stanzas, he provides more ambiguous but beautiful language. Apparently the original version of the poem was much steamier, but Keats gave into pressure and removed some of the objectionable lines when critics complained.

Typical of Romantic poets, Keats was also interested in the supernatural, mystery, death, and darkness. For example, in these lines he describes the stone icons in a medieval church almost as if they are supernatural beings:

Along the chapel aisle by slow degrees:
The sculptur'd dead, on each side, seem to freeze,
Emprison'd in black, purgatorial rails

The poem is an example of Spenserian stanza - not to be confused with Spenserian sonnets, which is similar but has more lines. The Spenserian stanza is comprised of nine lines, has a rhyme scheme of ababbcbcc and is written in iambic pentameter. Basically, this means there will always be ten syllables in each line.

One of the striking features of 'The Eve of St. Agnes' is the contrasting imagery, such as light and dark, youth and life, love and warfare. For example, the end of the poem contrasts the new beginning for Madeline and Porphyro with the deaths of Angela and the beadsman.

On a literal level, 'The Eve of St. Agnes' is about Porphryo and Madeline, two young lovers who decide to elope to escape their feuding families. The poem is long but still very readable. The characters are engaging. Typical of Romantic poets of the time, John Keats employed a specific form. the language serves to heighten the suspense and create striking imagery, which adds to a sense of mystery.

To a Skylark by Percy Shelley | Analysis, Themes & Poem

She Walks in Beauty by Lord Byron | Overview, Analysis & Themes

To a Skylark by Percy Shelley | Analysis, Themes & Poem

She Walks in Beauty by Lord Byron | Overview, Analysis & Themes