All plants that grow on land are descended from green algae, which tends to grow on damp surfaces like rocks and wood exposed to the elements. Learn more about the evolution of green algae into land plants, which scientists believe began around 410 million years ago. Updated: 11/11/2021
Create an account

The Evolution of Plants

This is a cabbage. And this is a pine tree. And this is a petunia. Know what they all have in common? They're all land plants, which is a term that means exactly what it implies. Land plants are those that grow on land, as opposed to those that grow in water. There are hundreds of thousands of land plants, and recently researchers have confirmed that all of these plants came from the same ancestor.

For a long time, people had observed the similarities between land plants and green algae, one of the four kinds of algae. But it wasn't until the rise of technologies that allowed for more accurate genetic mapping that we could demonstrate that all land plants did in fact evolve from green algae. So, all lands plants, from flowers to fruits to towering trees, all evolved from a slimy green cluster of microorganisms. How's that for an evolutionary success story? 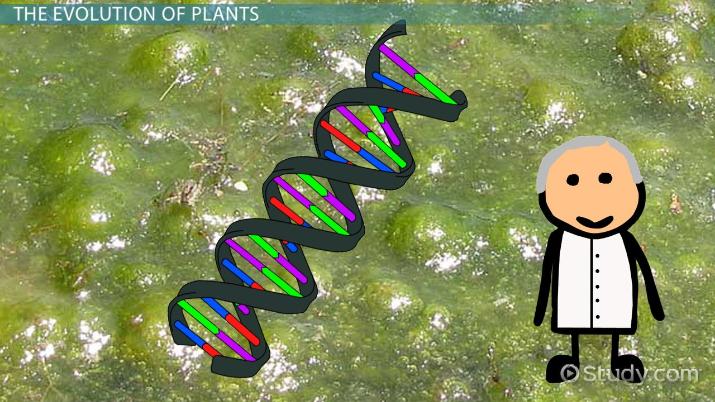 Coming up next: Classification of Vascular, Nonvascular, Monocot & Dicot Plants

Well, since green algae was so important to this world, I guess we should get to know it. There are four basic types of algae, so green algae is defined by a few unique traits. All algae have some form of chlorophyll, the green pigment that lets plants absorb energy from light. But most algae only have one type of it.

Green algae has two kinds of chlorophyll, called chlorophyll a and chlorophyll b, which not only gives it that bright green color, but lets it absorb light more efficiently. Because of this, green algae is the only kind of algae to store carbohydrates as a starch, not as a lipid, which is better for long term energy without drying out the individual cells. These are the main characteristics that define green algae.

From Green Algae to Land Plants

Let's jump back in time a bit. We are now in the Silurian period of the Paleozoic era, roughly 410 million years ago. The four types of algae all exist, and all four are starting to move slowly from shallow water onto land. Only one will be ultimately successful. At this time, shallow freshwater pools and muddy banks are covered in large, flat mats of charophytes. These mats can exist partially out of water because they are slowly developing resistant coatings to prevent them from drying out.

It is through this process that some of these mats will evolve into the first land plants. Meaning that land plants evolved from freshwater, not from the sea as previously thought. These first land plants are called bryophytes. We know them today mostly as mosses, liverworts and hornworts. Bryophytes can exist on land but still require a relatively moist environment. Like algae, they have no firm cellular structure to allow for lots of growth, but they do have cuticle, a wax surface that holds in moisture. All land plants are covered in cuticle and this adaptation was critical for the move from water to a drier environment.

The bryophytes are considered the first true land plants, and from here the diversity of plants exploded. The next stage of development was creating seeds that would not dry out and did not have to be submerged in order to germinate, as well as the adaptation of vascular tissue, the connective tissues in plants that transport water. Vascular tissues are unique to land plants, and this is actually what allows them to stand upright and firm. Water pressure in the tissues makes plants rigid and lets them grow upwards and outwards in a way that algae and bryophytes could not. From here the sky was, literally, the limit.

The land plants, those plants which can grow and live on dry land, all share a common ancestor. That ancestor is green algae, a type of algae characterized by having both chlorophyll a and b and processing carbohydrates as starch.

Around 410 million years ago, during the Silurian period of the Paleozoic era, mats of a multicellular, broad green algae called charophytes began to adapt from shallow freshwater to open air. Some charophytes evolved into bryophytes, land plants without vascular tissue, but with cuticle wax covering them to protect them from drying out. These were the first true land plants, and from here they evolved into hundreds of thousands of plants with vascular tissues we see all around us today. Green algae is the basis of one massive family tree.

The Evolution of Vascular Plants