The Fall of Saigon signaled the official end of the Vietnam War and is a memory etched in the minds of Americans who saw TV footage of desperate people falling from helicopters evacuating the U.S. embassy. Learn about the causes and timeline of the Fall of Saigon and the final offensive by the North Vietnamese that led to the collapse of the South Vietnamese military and government. Updated: 10/08/2021
Create an account

On the Precipice of Collapse

On January 27, 1973, the United States entered into the Paris Peace Accords with the Democratic Republic of Vietnam, or North Vietnam. The agreement officially ended the United States' involvement in the Vietnam War and called for the permanent ceasefire between North Vietnam and South Vietnam, officially known as the Republic of Vietnam. President Richard Nixon promised the South Vietnamese leadership, more specifically President Nguyen Van Thieu, that he would recommit American forces to Vietnam if the North Vietnamese violated the peace agreement.

Unfortunately for Nixon, a re-commitment proved to be legally impossible. In a series of legislative maneuvers in 1973, Congress rescinded all remaining power available to the president to conduct further war in Vietnam. In June, Congress passed the Case-Church Amendment, which imposed financial restraints as a way of ending all the United States military activity within Southeast Asia. This was followed by the War Powers Resolution, passed on November 7, which required the president to seek Congressional approval to deploy combat troops internationally.

Remaining elements of the United States were systematically withdrawn from Vietnam. The Military Assistance Command, Vietnam (MACV), which was the primary military command unit during the war, was terminated and replaced with the Defense Attaché Office (DAO), whose mission was to coordinate aid in South Vietnam. The United States no longer posed a viable threat to the North Vietnamese goal of unification. 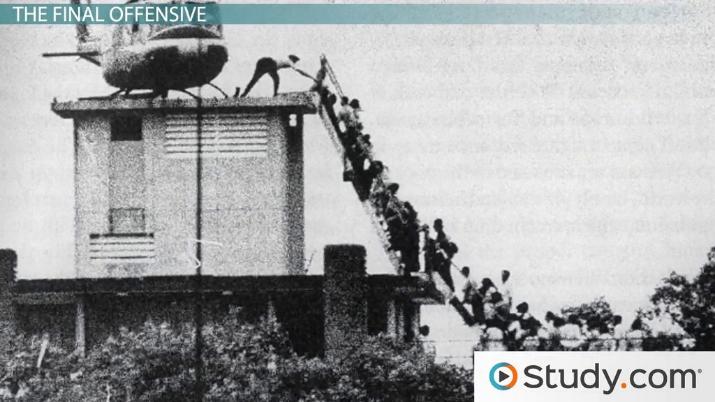 Coming up next: Communism Spreads During the Vietnam War: Cambodia and Laos

With the majority of the United States removed from the war, North Vietnam prepared for a final offensive, known as the Spring Offensive of 1975. On December 13, 1974, the North Vietnamese invaded South Vietnam, and the first battle, the Battle for Phuoc Long, was underway. By January 6, North Vietnam had defeated South Vietnam at Phuoc Long. President Gerald Ford, who had just assumed office in August 1974 following Nixon's resignation, pleaded with Congress to send aid to bolster South Vietnam. His plea was ultimately rejected.

From January to April, 1975, North Vietnam systematically marched through important areas in South Vietnam. North Vietnam captured the Central Highlands, followed by the cities of Hue and Da Nang, Cam Ranh Bay, and an installation at Xuan Loc. With these strategic losses, President Thieu resigned on April 21, but not before issuing a scathing criticism of American policy in Vietnam. Regardless, North Vietnam turned its focus to the capital city of Saigon.

In the meantime, the DAO prepared for a full evacuation of American personnel as well as a select amount of South Vietnamese civilians. At the beginning of April, the United States approved of Operation Babylift to evacuate orphaned children from the streets of South Vietnam, more specifically Saigon. Estimates suggested that over 3,000 children were safely removed from South Vietnam prior to its fall via Babylift. Simultaneously, with the resignation of Thieu, Duong Van Minh, the man who had previously failed as president of South Vietnam in 1963, returned as the new leader.

With North Vietnam shelling the Tan Son Nhut airbase and its forces moving closer to Saigon, the DAO immediately commenced Operation Frequent Wind as a means of evacuating the remaining United States personnel from the capital city. Over the course of two days, the United States managed to remove over 100 military personnel and roughly 7,000 civilians from South Vietnam. On April 30, 1975, North Vietnamese forces steamrolled through the gates of the presidential palace in Saigon. Televised broadcasts captured the Fall of Saigon, which marked the official end of the Vietnam War.

The horror that unfolded during the Fall of Saigon was minimal compared to the post-war actions in Southeast Asia. Just as President Dwight D. Eisenhower admonished in 1954, the dominoes began to fall. Like in Vietnam, communist forces seized control of Cambodia and Laos by the end of 1975. In all three nations, great purges of people occurred via 're-education' camps, a euphemism for labor and death centers. North and South Vietnam were eventually unified under the designation the Socialist Republic of Vietnam in 1976. It is important to note that these are the only three nations to fall to communism; the remainder of Southeast Asia remained largely intact.

The United States attempted to enter into a period of normalcy following the war. Yet, this was the first conflict in which the nation had been defeated. Americans quickly supported an isolationist ideology, one which had not been seen since the end of the First World War. Many referred to this newfound isolationist sentiment as the 'Vietnam Syndrome,' that is, avoiding another costly and losing war effort.

Several American political leaders, such as Nixon and Secretary of State Henry Kissinger, attempted to reconcile the loss by subscribing to the 'decent interval' concept, which maintained that, prior to the withdrawal in 1973, the United States had given the South Vietnamese the tools to survive, so the demise of the nation to North Vietnam was solely the fault of South Vietnam. In other words, since the United States left two years prior to the Fall of Saigon, many thought that enough time had passed and it shouldn't be held responsible for the failure of the South Vietnamese.

Regrettably, many returning veterans felt ostracized from society. Upon returning, there was not a victor's celebration. Many were unfairly stigmatized as being a part of a savage and losing effort. Veterans dealt with drug and alcohol abuse, the aftereffects of the herbicide Agent Orange and post-traumatic stress disorder (or PTSD). There was some positivity that followed the war. Following the Fall of Saigon, over 100,000 Vietnamese fled from the communist purge. The United States launched Operation New Life as a way of integrating the vast population of refugees into American society.

Following the passage of the Paris Peace Accords, the Case-Church Amendment and the War Powers Resolution, and the replacement of the Military Assistance Command, Vietnam with the Defense Attaché Office, all in 1973, President Richard Nixon had limited power to respond to any potential violations of the peace agreement by North Vietnam.

On April 30, 1975, North Vietnam captured Saigon. The Fall of Saigon officially marked the end of the Vietnam War and left the United States to reassess how it failed to achieve victory in Southeast Asia.

Study the major points of this lesson so that you can:

The Fall of Saigon During the Vietnam War: Causes and Timeline
Related Study Materials

Cambodia and Laos: Impact of Major Operations Under Nixon

Why Was the Boston Tea Party Important? - Lesson for Kids