The government of the Federal Republic of Germany is a three-branch system of government, with the most executive power residing in the position of the chancellor. Explore an overview of the German federal government and its history, and identify the different roles of the executive branch, the legislative branch, and the judicial branch. Updated: 10/20/2021
Create an account 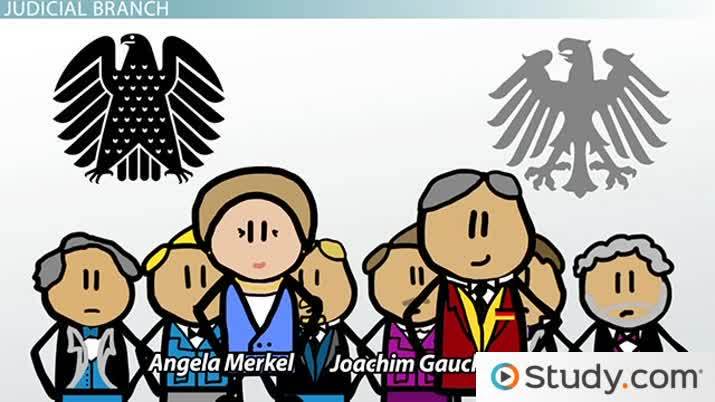 Coming up next: The History, Development & Major Components of the Constitution of Germany

Though there has been an area of central Europe which was known roughly as the German lands for centuries, Germany itself is a relatively young state. The German Empire was not declared until 1871, and Germany was again divided in two for nearly a half-century in the middle of the 20th century. The German government, as we know it today, first took shape in one of those halves: in West Germany after World War II.

The Basic Law of Germany, Germany's founding constitutional document, was written in 1949 by West German politicians with the permission of the occupying Allied powers. The Basic Law went into effect later that same year, and it remains the basis of German government today. In fact, when East Germany and West Germany were reunited in 1990, the former communist state of East Germany wholly adopted all of the provisions of the Basic Law and began the arduous process of reforming state institutions to accord with the Basic Law.

The Basic Law of Germany declares Germany to be a representative democracy with a three-branch government. The first of these branches is the executive branch. The executive branch is largely made up of two main posts: the president and the chancellor.

Despite the name being the same, the president of Germany is far less powerful than our own. Elected every five years by a special body, the president is largely a ceremonial position, charged with greeting important figures and performing official duties. Though the president does sign every German bill into law, the only time he's allowed to change or veto such laws is if he or she finds them in direct conflict with constitutional law.

Instead, most of the power in the German executive branch resides in the position of chancellor. The chancellor is a position modeled closely on the British prime minister and as such, has many of the same duties and characteristics of that position. The chancellor, for example, is elected from the German representative assembly, the Bundestag. The chancellor is usually a leading member of the party that wins the most seats in the elections to the Bundestag. After being chosen, the chancellor is the de facto head of state of the German government and sets the rules and general agenda for the German legislature during his or her time in office. In addition, he or she is the chief negotiator of German foreign policy and assumes Germany's seat on important international organizations, such as the European Council.

The legislative branch in Germany is made up of two bodies: the Bundestag and the Bundesrat. The Bundestag is the lower house of the German legislative branch, but it is by far the most powerful. It is made up of at least 598 members, half of which are elected directly by electoral district, while the other half are elected proportionally according to party candidate lists. I say 'at least' because there are never only 598 members; the German Bundestag usually adds members here and there to ensure that the total number of delegates aligns as accurately as possible with the election results.

The Bundestag spends most of its time passing, amending, and creating German law. It also holds an important power over the chancellor: the vote of no confidence. If a vote of no confidence passes, the chancellor is removed from office immediately and new elections are held. Though this rarely occurs, it is a symbol of the legislative supremacy of the people over the executive branch in Germany.

The third and final branch of government in Germany is the judicial branch. The courts in Germany are divided in terms of scope and severity of crime. For example, different courts handle tax law than handle criminal cases. Additionally, within these disciplines, cases with different prospective sentences are handled by different courts. In all cases, there's a regional and federal appeals system similar to what we have in the United States.

The German government is a three branch government much like our own, but the particulars of each position differ slightly. For example, Germany's president is nothing like the U.S. president; rather, he or she is a largely ceremonial figure who generally rubber stamps German law made elsewhere. Most of the real executive power in Germany resides in the position of chancellor, the de facto head of state elected from the Bundestag.

In turn, the Bundestag is the most powerful body of the legislative branch, as it creates, amends, and passes German law, and even holds the power to remove the chancellor from office. The upper house, the Bundesrat, also helps make German law, but it is far less powerful and subservient to the Bundestag. Germany's judicial branch possesses many courts that are divided by scope and severity of case, though its most important institution is the Federal Constitutional Court: the highest arbiter of all constitutional matters in Germany.

After this lesson is completed, you should be able to:

The Federal Republic of Germany: An Overview
Related Study Materials