The First Great Awakening was a religious revival in British colonies in America during the 1730s-1740s that emphasized human decision-making in matters of religion and morality. Explore the teachings of influential preachers like Jonathan Edwards and George Whitefield and the religious movement's impact on American independence. Updated: 08/19/2021
Create an account

In the 1700s, a European philosophical movement, called the Enlightenment, swept America. Also called the Age of Reason, this era laid the foundation for a scientific, rather than religious, worldview. Freedom of conscience was at the heart of this struggle against old regimes and old ways of thinking, and it changed the way people viewed authority. In the same way, a religious revival, called the Great Awakening, changed the way people thought about their relationship with the divine, with themselves and with other people. The Enlightenment engaged the mind, but the Great Awakening engaged the heart.

The First Great Awakening affected British North America in the 1730s and 40s. True to the values of the Enlightenment, the Awakening emphasized human decision in matters of religion and morality. It respected each individual's feelings and emotions. In stark contrast to Puritanism, which emphasized outward actions as proof of salvation, the Great Awakening focused on inward changes in the Christian's heart. 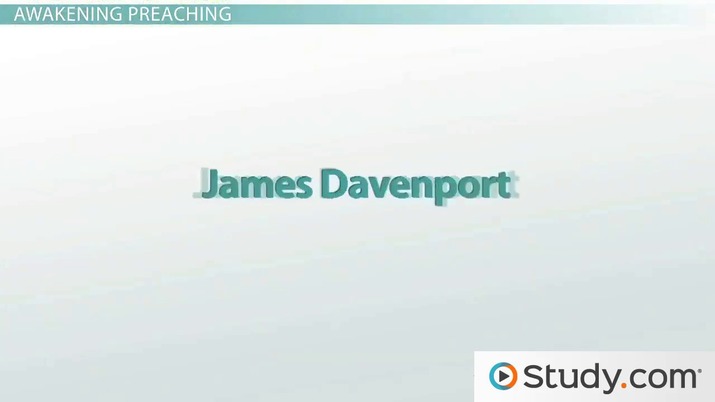 Coming up next: The French and Indian War: Causes, Effects & Summary

One effect of the Enlightenment had been reduced church membership and attendance. An evangelist, named George Whitefield, believed that people weren't going to church because 'dead men preach to them.' Whitefield and others like him began to preach in a much more energetic way. They tried to get their listeners to have a personal, emotional response to their preaching. The goal was for hearers to look at their own souls, to be convicted about their moral failures and then turn their hearts toward God.

Though most preachers targeted their messages to existing Christians, their events, called revivals, were often held in the open air or under large tents. Thousands of people attended these revivals, which were full of drama and emotion and the unexpected - a distinct shift from the austerity of the Puritans and the ritual of the Church of England (called the Anglican Church in America). Americans loved it. Two of their favorite preachers were Jonathan Edwards and George Whitefield. Jonathan Edwards is often credited with starting the First Great Awakening in 1741 with his famous sermon 'Sinners in the Hands of an Angry God.' Though this was not typical of his sermons, it has become a classic of early American literature:

'The God that holds you over the pit of hell, much as one holds a spider, or some loathsome insect over the fire, abhors you, and is dreadfully provoked: his wrath towards you burns like fire; he looks upon you as worthy of nothing else, but to be cast into the fire; he is of purer eyes than to bear to have you in his sight; you are ten thousand times more abominable in his eyes, than the most hateful venomous serpent is in ours.'

George Whitefield belonged to the Anglican Church. The famously cross-eyed evangelist helped spread the Awakening in England first and then in the colonies. Here is some of his advice to those who attended religious revivals:

'Come to hear them, not out of curiosity, but from a sincere desire to know and do your duty. To enter His house merely to have our ears entertained, and not our hearts reformed, must certainly be highly displeasing to the Most High God, as well as unprofitable to ourselves. … When preachers are dissuading from any sin or persuading to any duty, instead of crying, 'This was intended for such and such a one!' Oh, that persons instead would turn their thoughts inwardly, and say, 'Lord, is it I?' How far more beneficial should we find discourses to be than now they generally are!'

Like Edwards, Whitefield taught that people needed to have changed, repentant hearts. His admonition that listeners think about how a sermon applies only to themselves was a jab at the Puritan tendency to watch each other for signs of evil. However, many of his sermons also underscored the futility of boring ritual as seen in the Anglican Church he came from. Whitefield is credited with starting the practice of preaching in public, since the Church of England wouldn't give him a pulpit.

One of the most famous (or infamous) traveling preachers in the First Great Awakening was James Davenport. Just as the Puritans had done, Davenport taught that people needed to avoid the influence of the Devil in everyday life. He held public bonfires so his followers could burn the things that distracted or tempted them to pride. Non-religious books and luxury items commonly ended up in ashes. But one night, Davenport went too far in saying fancy clothes were luring people to vanity. Leading by example, he took off his pants and threw them in the fire! This demonstration turned off many of his followers.

Legacy of the Awakening

As with the Enlightenment, it's sometimes difficult for modern Americans to imagine life before the Great Awakening because the movement helped establish the way we view religion even today. Instead of seeing faith as a matter of tradition, Americans now felt free to choose their own religious affiliation. New denominations were founded, most of the established churches were reshaped and, by the 1760s, there was religious diversity in every colony. But the Great Awakening reached much further than church pews and may have been even more effective than the Enlightenment in shaking up the establishment.

In the North, it challenged the authority of the Puritan church because anyone could step up to the pulpit and share his own testimony. Differences in doctrine came to be seen more as a matter of opinion, not a matter of salvation. The Awakening challenged the social order of the South because slaves were as welcome as anyone else. The idea of salvation being available to anyone directly from God, regardless of race, gender or economic class, made church a thoroughly democratic experience. People became more tolerant, seeing themselves not as members of a particular religious group but as Americans who shared convictions about virtue, united in opposition against any establishment that tried to tell them how to think, feel or behave. In many ways, it prepared the colonists to defy the king and start a revolution.

The Awakening also fueled social reform. George Whitefield's death prompted a slave named Phillis Wheatley to publish a famous poem in his honor. Her obvious intellect, paired with the religious testimonies of escaped slaves, helped energize the northern abolition movement. The emphasis on personal faith led more people to study and interpret the Bible for themselves - an activity that 100 years earlier had led a Puritan woman, named Anne Hutchinson, to be banished from the colony. New colleges were established by churches to train their preachers and educate their followers, including Princeton, Brown, Dartmouth, Rutgers and Columbia Universities.

Let's review. The Great Awakening was a movement that altered religious beliefs, practices and relationships in the American colonies. It was parallel to the Enlightenment both in its values and its time frame. Traveling preachers gave emotional, entertaining sermons that emphasized a change of heart, a personal relationship with Jesus and an inward focus rather than tradition, ritual and deeds. Jonathan Edwards and George Whitefield were two of the most influential preachers of the time. They held their meetings outside under tents and welcomed anyone who wanted to listen. The First Great Awakening broke the monopoly of the Puritan church as colonists began pursuing diverse religious affiliations and interpreting the Bible for themselves. It also challenged the social establishment in several ways, fueled northern sentiment against slavery and resulted in the founding of some of America's most respected universities.

John Paul Jones and the Naval Battles of the Revolutionary War