From the simplest discussion among friends to the most formal summits between politicians, every conversation goes through certain stages. In this lesson, we will look at the five basic stages of conversations and how they apply in real life.
Create an account

Tina has some bad news to share with her friend Megan. It seems that Megan's dog has died, and Tina is the one who has to deliver that news. She's very sad for her friend, and she's also very overwhelmed by the task. She just doesn't know how to tell Megan the bad news.

Tina is trying to figure out how to have a conversation, or an oral interaction between two or more people. For many of us, day-to-day conversations can feel very simple and straightforward. But sometimes, like with Tina, conversations can be difficult to have.

The five-stage model of conversation says that there are five steps in every conversation: opening, feedforward, business, feedback, and closing. In a simple conversation, we might not be completely aware of all five stages, but they are there.

To help Tina talk to Megan, let's look at each of the stages of conversation, and how she can apply them to help her communicate. 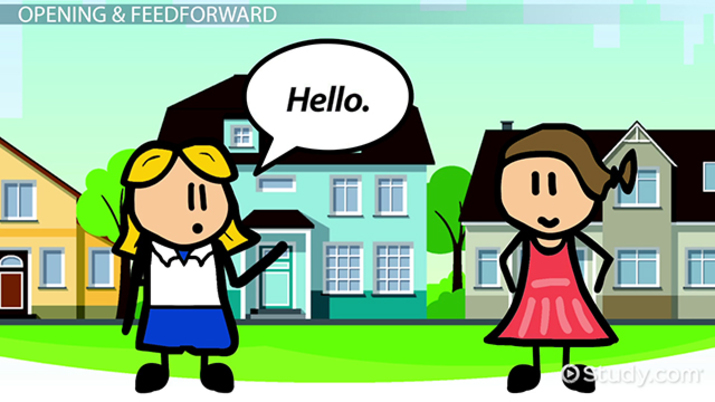 Tina is on her way to see Megan and tell her about Megan's dog dying. She's not really sure how to start this conversation. What should she say?

Every conversation starts with an opening, which is a greeting. Most of the time, this is verbal, like saying hello, though sometimes this can also be nonverbal, like waving.

Tina will want to start her conversation by saying hello. She might also want to have some small talk, like asking Megan how she's doing, or commenting on the weather. All of that would be part of the opening.

Once they've said hello and had a little small talk, though, Tina will want to move the conversation towards the topic of Megan's dog. Feedforward is the period of conversation when you transition into the point of the conversation. It's a time to preview what you're going to say. When you think of the word 'feedforward,' remember that it is moving the conversation forward.

For example, Tina might say to Megan, 'I'm afraid I have some bad news.' This is a way of moving the conversation forward, towards talking about Megan's dog, and also previewing what she's going to say. She's giving Megan a heads-up that the purpose of the conversation is not positive.

Tina's doing pretty well so far. She opened the conversation with a greeting and some small talk, and then previewed what she was going to say with feedforward. But now it's time to get to the heart of the conversation, the point that she needs to say.

The purpose or focus of a conversation is the business stage. During this stage, the main part of the conversation, there is a back-and-forth between members of the conversation. Questions may be asked and answered, and comments or ideas could be brought forward by either participant.

Back to Tina and Megan: now that Tina's told Megan that she has some bad news, it's time to move into the business stage of the conversation. She might tell Megan that her dog has died.

But that's not the end of the business stage, because Megan has some questions. She asks Tina how her dog died and whether he suffered. She might ask where his body is and whether Tina will help her plan a funeral for the dog.

Tina's made it through the main part of the conversation: the business stage. For this conversation, that was a difficult stage, because Tina had to impart bad news. But now it's time to move forward. Megan and Tina are wrapping up their conversation.

In a conversation with her boss or a professor, Tina might do a very formal feedback stage, where she says something like, 'In summary, my next steps after this conversation should be…'

But with Megan, her friend, Tina doesn't have to be so formal. The feedback stage during this conversation may simply be Tina expressing again that she is sorry for Megan and is here for her during her grief. Megan might thank Tina for sharing the bad news with her.

After feedback comes the closing stage, where the people in the conversation say goodbye and go their separate ways. Megan and Tina might hug and say, 'See you later.' In other conversations, a handshake might end the conversation. But there's always a closing of some sort.

After this lesson ends, you should be prepared to:

The Role of Culture & Gender in Listening