In Shakespeare's ' 'King Lear,' ' the Fool is the only character who speaks truth to power. Explore the roles of fools in Shakespeare's plays, understand the relationship between King Lear and his Fool, and speculate why the Fool disappears in Act III. Updated: 09/17/2021
Create an account

The Fools of Shakespeare

A lot of very bad stuff happens in the tragic plays of William Shakespeare. Things like star-crossed lovers committing suicide in Romeo and Juliet, or a husband getting blinded by jealousy and rage to kill a wife he loves more than anything in the world in Othello. But Shakespeare wasn't all sobs and wet tissues.

In order to add a little comic effect to otherwise tragic stories, and also to help make tragic scenes more relatable, Shakespeare would sometimes throw in a fool/court jester-type character. His fools were always common folks who used their cleverness to help along characters of higher social classes. Perhaps there is no wiser fool than the Fool in King Lear. 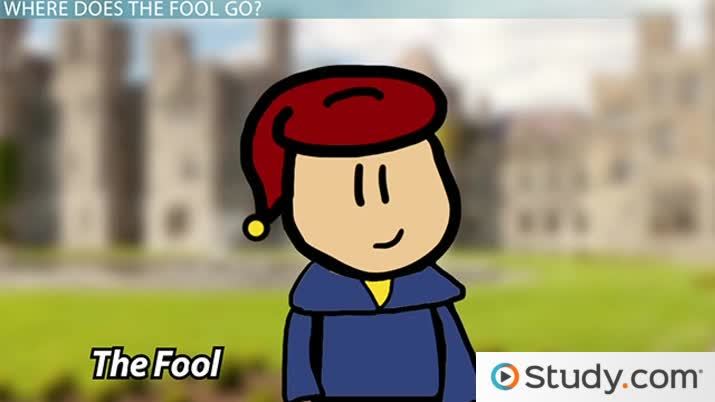 Coming up next: Shakespeare's Venus And Adonis: Summary & Analysis

The terms 'funny,' 'witty,' 'intelligent,' 'loyal' and 'honest' perfectly describe the Fool from King Lear. The Fool does not have the biggest role in the play, but his role is pivotal.

King Lear, who is King of Britain, is by nature a sensitive and prideful man who doesn't take criticism very well. For instance, he banishes his own daughter Cordelia for speaking her mind. But the King allows his court jester to tell it like it is because the Fool blends his criticism with humor. The Fool can also be honest and speak bluntly about the King's decision making when everyone else must watch their tongue.

Lear needs him. If we could pick one adjective to describe the Fool, it would be 'loyal.' He stays with the King even when they are without a home. Without the Fool, Lear is a madman with no one around to tell him the truth, no one around to be reasonable and wise. When Lear gives away his land, he is not quite a king anymore. The Fool is even blunt enough to call him 'nothing.'

'Thou wast a pretty fellow when thou hadst no need to

care for her frowning; now thou art an O without a

figure: I am better than thou art now; I am a fool,

A King and His Fool

One would think that a king would act responsibly and make decisions based on reason and wisdom. That's not the case for King Lear, who grows more and more insane as Shakespeare's tragedy moves along. At the beginning of the play, King Lear decides to retire. In order to help decide who will inherit his great wealth, he sets up a game where each of his three daughters gets to tell daddy how much she loves him.

The results of the game are disastrous. King Lear shuns the one daughter who actually does loves him, Cordelia, because she refuses to express in words how much she adores her dad. She is exiled and flees to France. Then he gives all his wealth to his two daughters, Regan and Goneril, who only pretend to love him.

The Fool lets King Lear know what a huge mistake it was to give up his land.

'To give away thy land

Come place him here by me

Do thou for him stand.'

William Shakespeare clearly had a goal in mind when writing King Lear. He wanted to show his audience that wisdom has absolutely nothing to do with wealth or social class. In fact, the Fool knew that letting Cordelia, 'the golden one,' because her hair was blond, go was an awful decision. 'Thou hadst little wit in thy bald crown when thou gav'st thy golden one away.'

Speaking his mind again, he tells the King that being a fool isn't the best lot in life but being King Lear is worse. 'I had rather be any kind o' thing than a Fool, and yet I would not be thee.'

Where Does the Fool Go?

Perhaps the biggest mystery in King Lear is what happens to the Fool. Without warning or explanation after Act 3, Scene 6, the Fool is gone from the play. There has been a lot of speculation about the fate of the Fool. The play has an enormously high body count. Characters drop like flies, and it's quite possible the Fool was killed as well. King Lear does state, 'And my poor fool is hanged.'

There is also speculation that since Cordelia and the Fool never share the stage that the two characters were originally played by the same actor. Dual-roling was common during Shakespeare's era. In turn, the Fool just had to be gone when Cordelia's character reentered the action of the play after she returned from France.

The Fool's last line in the play is 'And I'll go to bed at noon.' At this point, Lear is almost totally insane. It could be that Lear had taken in all the Fool's criticisms and his character was no longer needed in the play. Since every character in every single Shakespeare play serves a purpose in moving the narrative forward, when the Fool was no longer necessary to the story, Shakespeare simply disposed of him.

The Fool was the one character in King Lear who could tell the King the honest and brutal truth. As Lear quickly descended into total madness, the Fool stayed by his side. The Fool disappears in Act 3, and although there is speculation about what happened to him, we will never know for sure.

When you're through with the video, it should be easier for you to examine and analyze the character of the Fool in King Lear.

Flashbacks in Death of a Salesman

Dogberry in Much Ado About Nothing: Character Analysis & Purpose