As one of the foundational Eastern religions, Confucianism had an interesting founding. In this lesson, explore the overview of Confucianism, including its reputation as a religion or philosophy, its founder Master Kung, its key relationships, 'jen,' its influence, and its spread. Updated: 10/04/2021
Create an account

Like many other Eastern religions, the details surrounding the founding of Confucianism are a bit sketchy. With many historians arguing over dates and events, the most authentic materials on the topic are found in a collection of Confucius' teachings known as the Analects.

To begin, Confucianism is the philosophy or religion based on the teaching of Master Kung. Notice I chose to say philosophy or religion. I do this because it doesn't really hold to any solid belief in a divine being or even a view on the afterlife. For this reason, many choose to look at Confucianism more as an attitude toward life rather than a religion. Regardless of whether you call it a religion or a philosophy, it's very hard to deny the huge impact Confucianism has had on the Eastern world.

With this in mind, let's take a look at its founder. As we do so, we'll try and stick with the most agreed upon details of his life and his philosophies. 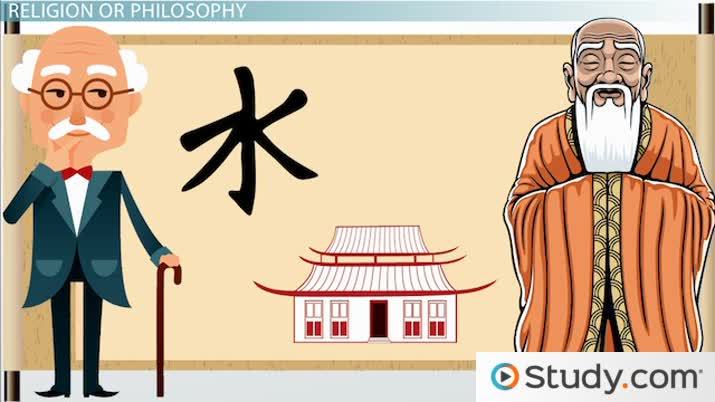 Try it now
Back
Coming up next: Jen, Li, and the Five Relationships of Confucianism

Born sometime around 551 BCE in China, Master Kung, known to us by the Westernized form of his name, Confucius, lived during a time of great political upheaval. The decline of the Chinese feudal system, a system of power based on land ownership, had led to a period of great instability at the time of Confucius' birth. At this time, feudal lords and the nobility were unable to protect themselves against invasion, and warring tribes began tearing apart the old established order of Chinese society. In fact, many sources report that Confucius' own family, which had once been members of the aristocracy, had lost their wealth and position of power during this very unstable time.

Seeing the ills which had captured his society, Confucius, who although poor was rather well educated, longed for his lands to be restored. To him, this would only occur when people, especially rulers, longed for peace over power. In short, he believed that in order for society to succeed, it must be governed righteously. Rulers must live by a very strict moral code, holding tightly to the virtues of humility, loyalty and diligence. Adding to these, rulers must always hold to the practice of filial piety, or deep respect of elders and ancestors. Not surprisingly, all these beliefs make up the basic tenants of today's Confucianism.

Along with this, Master Kung, or as we call him, Confucius, taught that a successful society must always protect and uphold what he called the five key relationships. They are the relationship of ruler to subject, father to son, husband to wife, elder to younger and friend to friend. Out of this belief in the importance of relationships comes one of Confucianism's main principles known as jen. Sometimes also spelled ren, jen, simply stated, is the desire to seek the good of others.

Even as a young man, Confucius wanted his beliefs to be heard. In fact, history tells us he had hopes of holding a high government position, one in which he could have influence over great feudal lords or a king. Since he believed that change would have to come from the top down, Confucius knew he'd have to bend the ear of the powerful in order to make a difference.

Sadly for Confucius, history tells us he never really rose beyond the low levels of government. Some sources even say he spent well over a decade traveling the country looking for a feudal lord who would listen to what he had to say. However, when no one in power would really listen, he had to be content traveling the land, sharing his beliefs with the more common people of China.

Little by little, Confucius began to amass disciples, and his teachings began to seep into the fabric of Chinese society. After his death, the Analects, or teachings of Confucius that we mentioned earlier, were compiled. When a man named Mencius became a zealous disciple and promoter of Confucianism, the teachings of Master Kung began to spread throughout all of China, then into the world.

Born in 6th century BCE China during a time of great political instability, Master Kung is known to the West as Confucius. Seeing the upheaval of his lands, Confucius longed for a society built on peace and harmony. To him, this would only occur when rulers sought peace over power. Comprising what are called the Analects, his teachings on righteous living and a proper moral code have formed the basis of today's Confucianism.

Holding firmly to the importance of maintaining and protecting the five key relationships of ruler to subject, father to son, husband to wife, elder to younger and friend to friend, Confucianism also teaches the principle of jen, or the desire to seek the good of others.

Desiring to have his voice heard, Confucius traveled the lands of China, amassing disciples and working to spread his ideals on peace and harmony. Although his voice was largely ignored by the powerful of his day, his teachings spread throughout the world as men like Mencius heralded his teachings.

Confucius Biography & Teachings | Who is Confucius?

Confucius Biography & Teachings | Who is Confucius?