Social responsibility has to do with whether a company chooses to have a relationship with the community and environment in which it is situated. Learn about the different approaches companies take to fulfill or avoid these responsibilities. Updated: 12/21/2021
Create an account

What Is Social Responsibility?

Meet Hope! Hope owns a business where they make baby blankets. When Hope first started her business, she was determined to be successful no matter what it cost. She worked long hours until she was able to take her startup company of only 5 employees and create a huge company that employed over 100 employees. While Hope's company has grown substantially, she feels that she is missing something. That is when she came across an article that discussed embracing relationships with the society where a business operates. What she was essentially reading about was social responsibility, which is the focus of this lesson.

Let's begin by defining a key concept. Social responsibility is the thought that a company should build relationships with both the society and the environment where it's located. It means valuing those relationships with society, customers, and employees, and not being totally consumed with only maximizing profits. For our friend Hope, up until she came across this article, she was more driven by profits than anything else. She had totally forgotten about the community that supports and helps provide business.

In this section we will look at the different approaches a company can take to become socially responsible. These four approaches are obstructive, defensive, accommodating, and proactive. 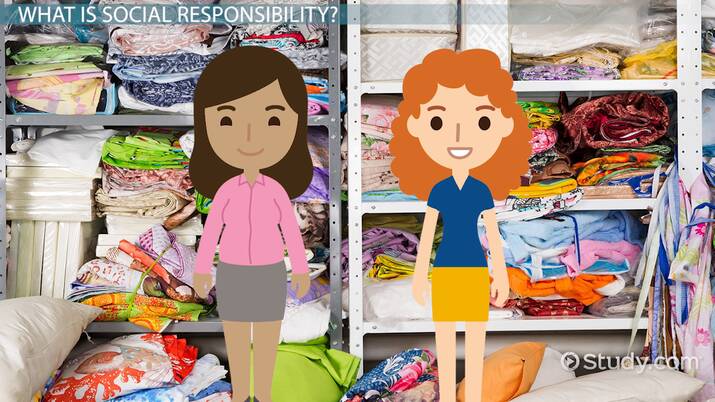 Coming up next: The Role of Organizational Culture in Social Responsibility

Perhaps the most deceitful approach to social responsibility is obstructive. Obstruct means to block or get in the way, so an obstructive stance blocks out its social responsibilities. It's more concerned with profits. Obstructive companies are known to pollute, deceive customers, and even exploit their own employees. Hope has decided that she does not want her business viewed in a negative manner and values the society that has helped her achieve success. Therefore, she will not be taking an obstructive approach.

This is where we transition from a company more consumed by profits to a company that believes that social responsibility should be a priority. Those companies that take an accommodating approach abide by legal requirements and are ethical at the same time. This means they are open to sharing facts and they don't try to hide things from the public. Those companies that fall within this approach may even participate in social programs should they be convinced that the programs are important. Companies taking an accommodating approach may pay fair wages and avoid testing on animals. After reading about the accommodating approach, Hope feels this could be a great choice for her business. She cares about her employees and pays them fairly, and understands the importance of remaining an ethical business in the community.

This too is an approach that values and makes social responsibility a priority. This is the approach in which a company takes steps to act before a situation occurs. Ethical practices are important to those companies in this category, and they avoid harm to the society, environment, and employees at all times. These companies want to help out society and look for opportunities to contribute, such as donating to charities and promoting environmental health, like recycling. While Hope feels her company currently falls within the accommodating approach, she hopes to make more of an effort to contributing to environmental causes in her community. She also hopes to find a way to donate to charitable organizations with the goal of becoming a proactive company in the near future.

Let's take a couple of moments to review what we've learned here.

Social responsibility is the thought that a company should create and maintain relationships with society and place importance on the environment. Those companies that are most socially responsible put society concerns over profits. The way a company operates, and the practices they employ, place them into one of four categories. Those categories are as follows:

The Importance of Consumer Choice in Economics

The Levels of Corporate Social Responsibility | What is CSR?

What Is Managerial Ethics? -Definition & Examples

Managing Business in a Global Environment

Unconscious Bias & Microaggressions in the Workplace