Edie is very excited: she's in high school, but thanks to Advanced Placement exams, she's going to end up with college credits before she even finishes high school!

Advanced Placement, or AP, exams are tests put out by the College Board that allow students to earn college credit if they pass. There are many subjects that have AP exams: physics, economics, French, English, and a bunch of other content areas.

Edie is going to take the AP Psychology Exam, which allows students who pass it to get credit for a college introductory psychology class. It's like she'll have taken 'Intro to Psych' before she even sets foot on her college campus!

Let's take a closer look at the free response section of the AP psych exam and what Edie needs to know to do well. 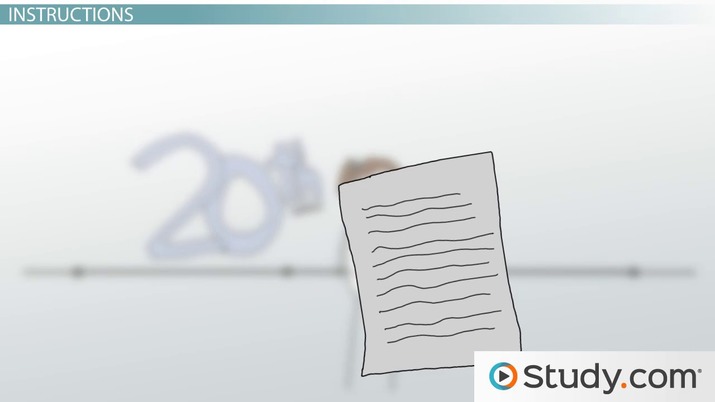 Coming up next: General Tips for Taking the AP Exam

Edie feels pretty good about the multiple choice part of the test, but she is a little nervous about the free response section. She's not the best writer, and having to write two essays in less than an hour seems really hard to her!

To save time, Edie can memorize the instructions ahead of time. That way, on test day, she can just skim the instructions and jump right in to planning and writing her essays. The instructions can be found at the College Board website, but they don't really change much from year to year.

For example, in 2014, the instructions were: 'You have 50 minutes to answer both of the following questions. It is not enough to answer a question by merely listing facts. You should present a cogent argument based upon your critical analysis of the question posed, using appropriate psychological terminology.'

While those words might vary a little bit each year, the basic gist will likely remain the same, so as long as Edie understands the instructions before test day, she can save a few minutes.

Of course, Edie won't know the exact questions she'll be asked ahead of time, but there are some key words that she can look for once she does know the questions.

If she sees the word 'identify,' it means that she should point out psychological concepts in her response. For example, if she's asked to identify the school of thought that Edward Thorndike and Alfred Binet contributed to, she'll want to mention educational psychology in her answer.

If Edie sees the words 'explain,' 'discuss,' or 'relate,' she'll want to make connections between the question and different psychological viewpoints. For example, if she's asked to discuss the major shift in psychology in the mid-20th century, she'll want to write about the way that the middle of the 20th century, powered by social, political, and scientific changes, moved from a mostly behavioral view to a mostly cognitive one.

And no matter what the question asks, Edie will want to make sure to 'define' any terms that she uses in her essay. If she talks about the behavioral view of psychology, for example, she'll want to say that view sees humans as being driven by rewards and punishments.

Edie should also understand that she is likely to see two different types of questions: unit-based and interunit questions. Unit-based questions ask for students to explain something that has to do with a particular part of psychology. For example, she might be asked to explain why Skinner's behavioral theory is an incomplete picture of human experience. The answer will be limited to behavioral theory.

On the other hand, interunit questions ask students to tie several different parts of psychology together. For example, Edie might be asked to explain a particular issue from the point of view of different psychological areas, like biological psychology, cognitive psychology, Freudian psychology, and so on.

Most AP psych exams have both an interunit and a unit-based question in them, so understanding that ahead of time can reduce Edie's anxiety about what to expect.

Ok, Edie knows the instructions and the types of questions that she's likely to see, but she's still worried. Will she have enough time? And what can she do to make sure her score is high?

It's important to note that points are not lost for spelling, grammar, or handwriting as long as Edie can get her point across, so she shouldn't spend time or energy worrying about those things.

Edie should also understand that she can break up the 50 minutes in any way that she wants. Usually, there's one question that requires a little more time, so Edie might want to read both questions first and then figure out how much time she'll need for each. But most important, she'll want to make sure that she is able to leave enough time for the second question that she writes: she won't want to end up with no time to finish!

Finally, if Edie is feeling stressed out, she should remember that the free response section is not worth a lot in the big scheme of things. Together, the questions are only worth 1/3 of the grade, which means each one is only 1/6 of the grade! The questions tend to be very detailed, but because they aren't worth much, Edie should just take a guess if she doesn't know how to answer part of a question.

The AP Psychology Exam allows students to earn credit equivalent to a college introductory psychology class by taking a test. The exam includes both a multiple choice section and a free response section that's worth 1/3 of the score. When preparing for the free response section, students should memorize the instructions ahead of time and look for key words in the question on the day of the test, like include, show, describe, discuss, explain, and relate.

Students should be aware that they are likely to see free response questions that are limited to one unit of a psychology class, as well as questions that spread across units. Students should also know that points are not taken off for spelling, grammar, or handwriting issues, and that they can break up the time however they want.

The Multiple Choice Section of the AP Psychology Exam

Overview of the AP Psychology Exam

What is Parallel Processing? - Definition & Model

What is the Limbic System in the Brain? - Definition, Functions & Parts

What Is Descriptive Statistics? - Examples & Concept