When America was a new nation, its foreign affairs were complex but vital to building a strong country. Learn about America's involvement in the French Revolution, and the importance of the Jay's Treaty and the Treaty of San Lorenzo. Updated: 08/20/2021
Create an account

Opinions were everywhere in the new nation. People appreciated the help the French had given the U.S. in the revolution, and people were anti-monarchy. Many people wanted the U.S. to take a role on the world stage. President Washington knew better. Washington understood that the new nation was too weak to go off fighting the world, even to help the French. He knew that Britain was still taking steps to undermine the new republic. To better understand the early foreign affairs of the U.S., we will look at involvement in the French Revolution, the Jay Treaty and the Treaty of San Lorenzo. 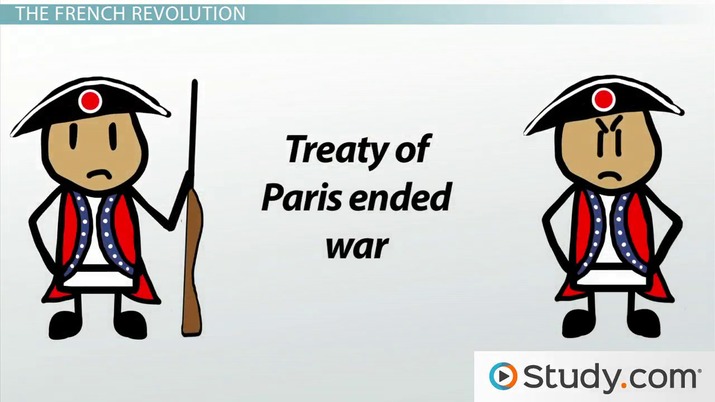 Coming up next: The Whiskey Rebellion and Battle of Fallen Timbers

Helping our allies, and doing anything that would strike back at the British, was very appealing to many. On top of it, the British were still trying to find back doors into causing trouble for the states.

Washington knew the U.S. did not have the strength to get involved at this point as a young nation. It would stretch our resources too thin and antagonize our enemies. President Washington had also been advised that the French cause did not have the kind of cause to show the restraint and have the outcome of the American Revolution. This proved true through the execution of Louis XVI and the whole reign of terror.

So what do they do with the minister France is sending? Should they recognize him as a representative of a legitimate government?

The minister they sent was Edmund Genet. The guy got off the boat from France, and instead of going to report to the official channels, he went on a PR tour of the South. He was drumming up support for his cause. This behavior made the decision easy for President Washington - he had him recalled back to Europe. Genet actually stayed, although not there officially anymore - he probably would be guillotined in France!

As a side note, Jefferson handed in his resignation to President Washington over the whole Genet affair. He was pro supporting the French, but he couldn't continue to back Genet with how out of control his behavior got. The time was so tense, Washington needed his Secretary of State, so he was able to convince him to stay on a while longer.

So the official position of the U.S. on the French Revolution was neutrality, even though there was a great deal of popular support. So did we win points with the British? How were the relations going there?

Well, the British weren't exactly happy with losing. Even after the Treaty of Paris, which officially ended the war, the British wouldn't leave their forts in the Northwest territory. They kept on seizing American ships, and they would impress the sailors. Impressment is when sailors are forced into naval service. You can imagine this did not make the Americans happy.

To be fair, the U.S. also kept passing navigation laws that were damaging to the British. So obviously these parties needed some communication. In 1794, the U.S. sent John Jay to Britain as a special envoy to negotiate the two nations' differences. In November, 1794, Jay's Treaty was signed, and it probably averted war with Britain!

The treaty got the British out of the Northwest territory within two years, established America's claim for damages from British ship seizures, and provided America a right to trade in the West Indies. So everyone in the states celebrated, right? No. President Washington did push for support, and it passed the Senate in 1795.

That being said, John Jay was actually burned in effigy by mobs in America. So why were they not happy? People believed the treaty was unfair. It did not deal with the issue of impressment of American sailors and didn't handle the British interference in American trade to people's satisfaction. Basically, the mobs thought Jay brought home a one-sided treaty.

The Treaty of San Lorenzo

The Treaty of San Lorenzo was negotiated by Thomas Pinckney, America's special envoy to Spain. The agreement allowed American settlers the right to deposit their exports in New Orleans and to engage in commerce in the city. This was really important to the more than 100,000 Westerners who lived in Kentucky and Tennessee and to the thousands of settlers who lived in the area that is now Ohio. In the treaty, Spain recognized the southern and western boundaries of the U.S. The treaty allowed the U.S. access to the area now known as the states of Mississippi and Alabama.

Opening up the Mississippi to American navigation was huge! The treaty also helped with the expansion of American borders. The Treaty of San Lorenzo, or Pinckney's Treaty, was signed in October of 1795.

So let's summarize. Foreign affairs were complex and very important in America's early years as a new nation.

Many in America wanted to support the French Revolution, but the U.S. stayed neutral. President Washington was convinced the young nation couldn't be spread that thin by getting drawn into others' wars.

Jay's Treaty averted war with Britain, but the American people were not pleased and felt the treaty was unfair.

The Treaty of San Lorenzo, or Pickney's Treaty, established the U.S. southern and western borders and opened up the Mississippi to American navigation.