A fugue is a musical composition that introduces a musical idea that is repeated throughout using different, blended melodies. Study the definition of the fugue, the parts of a fugue, how Johann Sebastian Bach became known for his fugues and examples of this musical composition. Updated: 09/20/2021
Create an account

Imagine you and a few friends are in a car race. You all have to take the same approximate route, but if you try to drive in the same place at the same time, you'll probably get in a car wreck. So instead, you decide that one person starts first, then the rest follow one by one as you reach certain checkpoints. This is a lot like how a fugue works.

A fugue is a piece of music that uses interwoven melodies based on a single musical idea. Fugues were most popular during the Baroque Period, ca. 1600-1750. They were based on an earlier idea from the Renaissance Period called imitative polyphony, where multiple singers would sing the same melody at different times. This is similar to a round, like 'Row, Row, Row Your Boat' or 'Frère Jacques.' Fugues were written either as an independent piece or as part of a larger work. 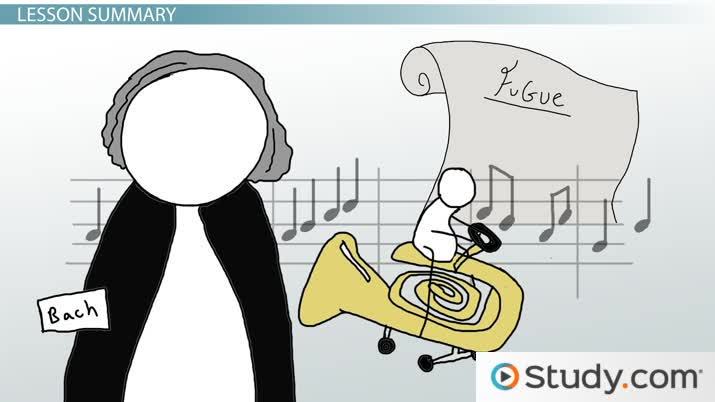 Coming up next: The Organ: Instrument Characteristics and History

Parts of a Fugue - Subject and Answer

During the Renaissance, much of the music was based on words or lyrics, and each phrase of words would have its own melody. It was popular to have the melody sung by a four-part choir in succession (please see the video at 01:24 to hear this succession). The Baroque period was more about expressive music, though, and composers wanted to write music without being tied to text. So instead of text, they sometimes used a small musical idea called a subject to rev their musical engines. In a fugue, the subject is stated by one voice and is continually introduced voice by voice, kind of like what can be heard at the beginning of this lesson. First, the subject was presented in a high-pitched range, then in a medium-pitched range, then in a low-pitched range. It was basically the same sequence of notes each time, but in a different range.

The subject is usually used throughout the fugue, played consecutively in three or four different voices. The voices are all in different ranges so that each time the subject enters, it can be clearly heard. To start the fugue, the subject is played by one of the voices. Let's say this is you, starting the race with your friends. After the subject is introduced, an answer is given. In a fugue, the answer is a repetition of the subject by another voice, usually a higher one. We could say this is when you've reached your first checkpoint and your friend who is driving the smaller car takes off from the start line. The answer is usually the same sequence of notes, but starting on a different pitch, so it sounds like this (please see the video at 03:15). Because the answer is played on a different starting note, and is therefore in a different key, it adds contrast and expression, just what the composers wanted.

Parts of a Fugue - Countersubject

Then, the magic starts to happen, and we kick it up into second gear. While the subject is being played in a second voice, the first voice often continues into new melodic music called the countersubject. This is like you reaching a new section of the course while your friend in the small car, the answer, is driving the first section of the course. You don't stop driving just because they've started, and now you're onto another section of the course. But, there's a catch: because the subject and the countersubject are being played at the same time, they have to be written in a way that they will go together without creating musical havoc.

You may recall that when multiple independent melodic lines are woven together to create harmony, it's called counterpoint. Counterpoint, or contrapuntal composing, is key to a fugue. It's the interweaving melodies that make the fugue complex and interesting. The trick is finding a way to entwine the melodies in a pleasing harmonic arrangement. In each entrance of the subject and subsequent countersubjects, the composer is challenged to find new ways to develop the melodies into something fresh. The entrances continue until all voices have added their own touch to the subject.

Parts of a Fugue - Episode

But, the listeners might get bored if the music was just made up of subjects and countersubjects. Most fugues have short sections called episodes, where the music is changed up a bit. First, the music is modified by changing the set of pitches that the music is based on, which adds contrast and expression to the feel of the music. This changing of keys is called modulation. This might be like a change of scenery in your race.

Also, the fugue's subject is either modified or not used at all. It's like a 'choose your own adventure' section for the composer, where he or she can use a fragment of the subject and experiment with it by using what are called manipulations. Manipulations let the composer stretch the fragment into long notes, shrink it into little, fast notes, play it backwards retrograde, or even turn it upside down. Think of it like modifying your car. Maybe during a jaunt in your race, you modified your car with a new turbo boosting engine, added a back-up camera, put on bigger tires, or even installed a new pine-scented car freshener. In each case, new fuel and interest is added, sparking anticipation of how and when the subject will return. Eventually, the subject does return and the music continues on, presenting subjects and countersubjects until the composer adds another episode or ends the piece.

Bach and the Fugue

Johann Sebastian Bach was a master composer of the Baroque period who was known for his fugues. As an organist and church choirmaster, it's no surprise that most of his fugues were written for organ, harpsichord, or chorus. Bach was a master of composing with inventive melodic and rhythmic contour. His subjects and countersubjects combine in ways not seen before the 17th century. He literally wrote the book on fugues and composed countless fugues during his lifetime. His 'Little' Fugue in G minor is a popular example. Listen at 07:09 for the four separate entrances of the subject and how Bach was able to combine the melodic lines to produce harmony.

In all, the interweaving melodies of the fugue make it a complex and challenging style to compose. As each subject and answer are introduced, the music becomes more and more involved, layering melodies that combine to create harmony. Like a car chase, the melodies wind through twists and turns, each melody following the one before it. Like modifying a car, composers add contrast and variety to the subjects with modulation, and apply manipulation, like augmentation and retrograde, to mix things up and make their expressive statements more powerful. With the fugue's freedom of composition, Baroque composers were finally able to put musical creativity in the driver's seat.

After watching this video lesson, you'll be able to:

Organ Instrument Types, Characteristics & History | How Does an Organ Work?