Michael has taught college Art and secondary English and Social Studies. He has a Master of Fine Arts and a Masters of Library and Information Science.

The Fundamental Orders of Connecticut was an early agreement between the colonial communities of Hartford, Wethersfield, and Windsor that established a representative government based on the example of a number of Massachusetts colonies. It's arguably the very first constitution of the American colonies. Made up of a preamble and 11 orders of law, the Fundamental Orders established a rule of law for these Connecticut colonies based on civil governance in relation to the word of God and the Congregationalist Church. 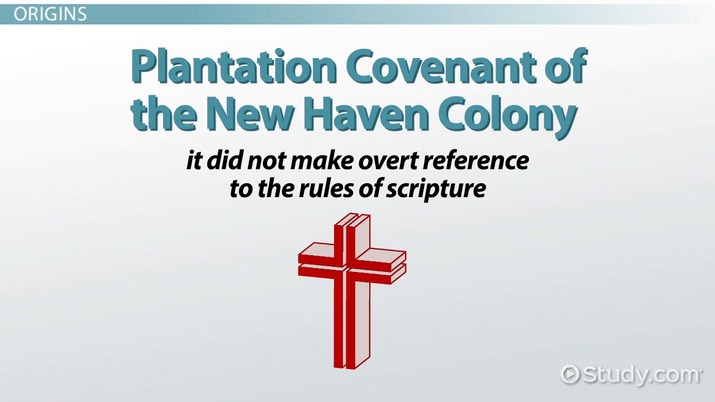 Coming up next: The Golden Age of Piracy: Timeline, Facts & Ships

Connecticut colonials established their communities after splitting from Massachusetts communities in the early 1630s. The Connecticut General Court adopted the Fundamental Orders on January 14, 1639, although the date on the original document is 1638. This has been attributed to the colonists not following contemporary conventions for marking a year.

Similar to Massachusetts, Connecticut towns were formed by Puritan Congregationalists, the Connecticut Colony's established religion. The Fundamental Orders were based on earlier Massachusetts models that used principles from both church and trade covenants of the time. Maintaining a religious, theocratic orientation, Connecticut tied participation and membership in government to church membership and documentation of religious affiliation.

Theocracy is governance by religious leadership with a presumption that leaders are divinely informed by God. The Fundamental Orders differed from the Plantation Covenant of the New Haven Colony only in that it did not make overt reference to the rules of scripture. The Plantation Covenant was a similar early constitution that explicitly required all members and representatives to be church members and required decision making in accord with the perfect rule of scripture. Unlike New Haven, the language of the Fundamental Orders focused primarily on civic life rather than religious affiliation or requirements.

Provisions of the Orders

The 11 orders provided the following basis for the government for the towns of Hartford, Wethersfield and Windsor at that time:

The Fundamental Orders of Connecticut was an early colonial constitution that established a rule of law that governed the towns of Wethersfield, Windsor, and Hartford, beginning in 1639. The Orders were based on similar documents defining the rule of law in the Massachusetts Commonwealth and was derived from the terms of trade and church covenants that preceded it. Though it referenced the will of God, the Fundamental Orders broke with the British theocratic traditions and differed from the Plantation Covenant of New Haven Colony, instead focusing the 11 orders on a structure for civil government, hence its significance.

Prompts About the Fundamental Orders of Connecticut:

Create a timeline that details the events leading up to the Fundamental Orders of Connecticut and ends with the adoption of the Orders.

Example: Begin the timeline in the early 1630s, noting how parts of Connecticut were splitting from Massachusetts. End with January 14, 1639.

Write an essay in which you explain the role of religion in the Fundamental Orders. Did religion play a central role in the Orders? Why or why not?

Tip: Make sure you understand the definition of theocracy, as well as how the Fundamental Orders differed from the Plantation Covenant of the New Haven Colony.

Write an essay in which you explain why the Fundamental Orders caused Connecticut to earn the name the Constitution State.

Example: Look at the provisions of the 11 Orders and analyze how they are similar to or relate to amendments of the US Constitution.

Choose one of the 11 Orders and analyze why that Order was important or necessary.

Example: The authority to collect taxes allowed the Connecticut colony to levy funds from its residents. These funds could be used for the public good, such as for the construction of schools or to pay off debt.