Bailey teaches High School English, has taught history, and has a master's degree in Anthropology/Historical Archaeology.

The Furies, or Erinyes, were the Greek goddesses of vengeance and justice. Hags with snakes in their hair, these goddesses brought justice to anyone who deserved it, particularly hated children who disrespected their parents. Updated: 09/15/2020
Create an account

The Furies in Greek Mythology

The Furies, also called the Erinyes, were three goddesses of vengeance who lived in the Underworld. The Underworld is the Greek realm of the dead. As goddesses of vengeance, the Furies were sent out to bring justice to people who committed crimes. According to mythology, they focused on punishing children who disrespected or murdered their parents, people who lied, killers, and people who sinned against the gods. However, any lawbreaking was open for punishment by the Furies. 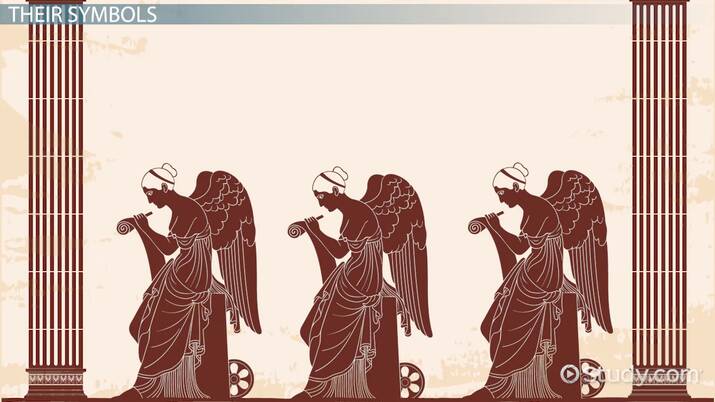 The Furies are described as looking like hags. As they were said to have snakes in their hair and wrapped around their arms, the Furies are often symbolically associated with snakes. Furthermore, the Furies are associated with blood, as it was said to drip from their eyes. Wearing all black and carrying whips, these three goddesses of vengeance and justice also had bat wings. Together, this gave them a very intimidating look.

Names of the Furies

Although the traditional name for the Furies is the Erinyes (meaning 'strife'), the Greeks did not like to say this name. Instead, they chose to call the Furies names such as Eumenides (kindly), or Semnai (August), perhaps as a way to placate the angry Furies. While some sources say that there may be more, most myths have three Furies. These three goddesses are Alecto (anger), Megaera (jealousy), and Tisiphone (avenger). Each of the Furies has a different role or a different crime that she hated the most, and this was illustrated by her name.

There are several different versions about the creation of the Furies. In one story, the Furies are born from the blood of Uranus, the ancient god of the sky, and Gaea, or mother Earth, after Uranus's death. In other stories, they are the children of Gaea and Darkness. Yet another story says that they are the daughters of Nyx, the female goddess of night.

Although the Furies appear in the Iliad as spirits who make sure things are following the laws of nature, they are not major players in a story until later. The first major appearance of the Furies in written mythology occurs in a trilogy by Aeschylus, a writer of tragedies. This trilogy was the Oresteia, and tells the story of King Agamemnon and his family after the Trojan War. Agamemnon had been determined to avenge his brother's honor after his sister-in-law, Helen, ran away to Troy with Prince Paris. However, the Greek military faced some issues getting to Troy, mainly because Agamemnon had offended a goddess. To appease her wrath, he had to sacrifice his daughter Iphigenia to the gods.

When Agamemnon returns home after the war, his wife Clytemnestra is still angry about this sacrifice. She and her lover kill him for the death of Iphigenia. Clytemnestra, however, is then killed by her son Orestes out of revenge for Agamemnon. Clytemnestra's ghost appeals to the Furies to avenge her. Since murdering a parent is one of the worst crimes possible, the Furies chase Orestes to Athens. Here, Athena, the Greek goddess of wisdom and warfare, convinces them to let Orestes go.

As a result of this, the Furies are given a new name, the ''Venerated Ones,'' and are seen as strong and determined punishers of those who murder their family members. Only a divine order can cause them to step aside from giving out their punishment, though later on there were other ways to placate the Furies. This included performing specific rites or carrying out divinely appointed tasks as a way to apologize to the gods. Some myths say that after this event, the Furies became defenders of justice instead of beings who served vengeance.

The Furies in Greek Mythology, also called the the Erinyes, were goddesses of vengeance and justice. Symbolized by snakes and blood, the Furies travelled the earth dispensing punishment, as well as torturing souls in the Underworld, the Greek realm of the dead. As such, they were chthonic beings, or related to the Earth and the Underworld. They served Hades (the god of the Underworld) and Persephone (goddess of spring and queen of the Underworld).

Furies were also called Eumenides (kindly) or Semnai (August). There are differing accounts as to how the Furies came to be. In one story, they are the children of Uranus, the ancient god of the sky, and Gaea, or mother Earth. In others, they are the children of Gaea and Darkness. In a third, they are the daughters of the goddess of the night, Nyx. The three most important Furies are named Alecto (anger), Megaera (jealousy), and Tisiphone (avenger).

While the Furies first appear in the Iliad, their main role occurs in a trilogy by Aeschylus, a writer of tragedies. This trilogy is the Oresteia, which tells the story of King Agamemnon and his family after the Trojan War. In this story, they set out to avenge a mother, Clytemnestra, who was murdered by her son. The goddess of wisdom and warfare, Athena, intervenes on his behalf. As a result, the Furies receive a new name, ''The Venerated Ones,'' and a reputation as defenders of justice.

Megara in Greek Mythology | Who is Hercules' Wife?

Who Is Hyperion in Greek Mythology? - Story & Facts

Eros the Greek God of Love Facts: Lesson for Kids