Gestalt Theory is based on the idea that the whole is greater, or at least perceived differently, than the sum of its parts. Explore this concept through philosophers Ehrenfels and Wertheimer's ideas, Perceptual Grouping, and the Phi Phenomenon. Updated: 09/25/2021
Create an account

When you put the parts together in your mind to form the image of the tree, the parts can still be clearly seen but are no longer of any significant individual importance. When identified individually, each part also has different characteristics to the whole.

While you may think this is an interesting point, you may be wondering what it has to do with a lesson on Gestalt theory and perceptual development. Let's start to answer this by defining the word Gestalt. Gestalt means 'organized whole.' Gestalt theory is based on the fact that this organized whole is perceived differently than its individual parts. 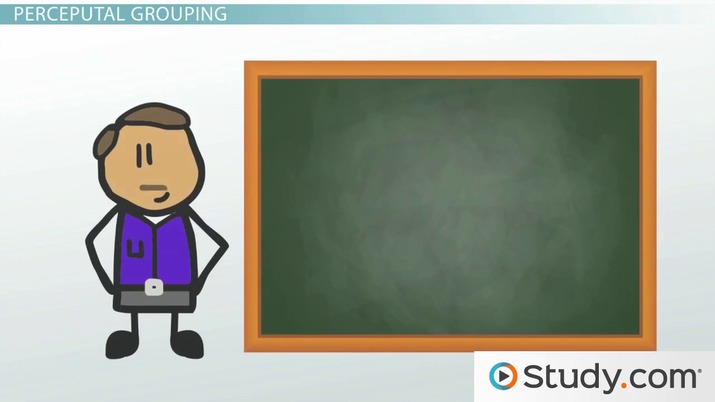 Coming up next: Sensory Deprivation: The Impact on Human Development

The Austrian philosopher Christian von Ehrenfels first introduced the concept of Gestalt. Ehrenfels saw a problem with the psychology of his time, which focused on the separate elements of perception and how associations formed between these separate elements. He realized that this idea couldn't explain how we can have the same experience if the elements have changed. Ehrenfels felt this must mean that experience is more than the sum of its elements.

Let's look at the following example of this. We hear a melody. We hear it again, and our memory enables us to recognize it. The melody is played again in a different key. We still recognize it. The sum of the elements is different because different notes are being played, yet the melody is the same. Influenced by the work of Ehrenfels, Czechoslovakian psychologist Max Wertheimer came up with a different explanation of how we perceive the world around us. Gestalt theory had its formal beginning with his work.

Wertheimer said that sensory elements were not individual parts of the perceptual experience. Instead, perception is an experience that is not determined by individual elements but by the fundamental nature of the whole. Wertheimer also said that visual elements are grouped based on certain fundamental principles, such as proximity or similarity of the elements.

The following experiment illustrates the phi phenomenon. A person is watching a screen. There are two images of a line projected onto the screen in succession. One image is on the left side of the screen and the other is on the right. When these images are viewed with longer intervals of time in between them, they are seen as separate lines. But when they are viewed at rapid intervals, the viewer no longer sees two separate lines. Instead, they perceive one line that is in motion.

Wertheimer used the apparent movement demonstrated by the phi phenomenon to form an argument for Gestalt theory. He said that this apparent movement is not a series of sensations but rather the effect of two sensations cooperating to produce a new and unique sensation that cannot be split up into smaller parts.

Gestalt means 'organized whole.' Gestalt theory is based on the fact that this organized whole is perceived differently than its individual parts. The concept of Gestalt was introduced by a philosopher by the name of Ehrenfels. Wertheimer was influenced by the idea of Gestalt and used it to develop an explanation of how we perceive the world around us. In this way, Gestalt theory was created.

Perceptual grouping is the idea that visual elements are organized into groups that form separate units of perception. The phi phenomenon is the perception of motion between separate objects viewed rapidly in succession. These two concepts illustrate how a perception cannot always be explained by being broken down into separate elements. Instead, the combined elements must be viewed as entirely unique experiences.

Upon completion of this video lesson, you should be able to:

Psychology Disciplines & Subfields | What is Psychology All About?

Tissue Types & Characteristics | What is Tissue?

Law of Similarity Principle & Examples | What is Similarity in Psychology?