During the 17th century, artists in the Netherlands produced some of the world's most renowned works of art. Learn about the Golden Age of Art, and explore the great painters and the famous works they created. Review the historical background, examine the paintings of daily life, and meet the famous Dutch artists who created them. Updated: 10/04/2021
Create an account

It's a country that goes by many names: the Netherlands, the United Provinces, Holland, the Dutch Republic. It's also a country that, in the 17th century, experienced a glorious era of artistic achievement that historians often call the Golden Age of Art.

We'll begin with a little historical background. In 1556, the Netherlands fell under the rule of King Philip II of Spain. Philip was Catholic. The Netherlands was primarily a Protestant country. Tension mounted quickly and exploded into a Dutch rebellion and all-out war in 1568. Several provinces declared their independence in 1579. Finally, in 1609, both sides agreed to a truce. For all practical purposes, the war ended here, even though Spain did not officially recognize the new Dutch Republic until 1648.

When the violence ended, the Netherlands' Golden Age began. As we study the art of this period, keep in mind these three historical facts. First, most Dutch people were Protestant Calvinists who valued simplicity. They worshiped in plain, white-washed churches that lacked religious art. Second, the Dutch Republic was a prosperous country that took a leading role in trade throughout the world. At home, the middle class grew wealthy and powerful. Third, the nation was a republic, governed not by nobility but mostly by middle class merchants who controlled local government and had strong influence at the national level. 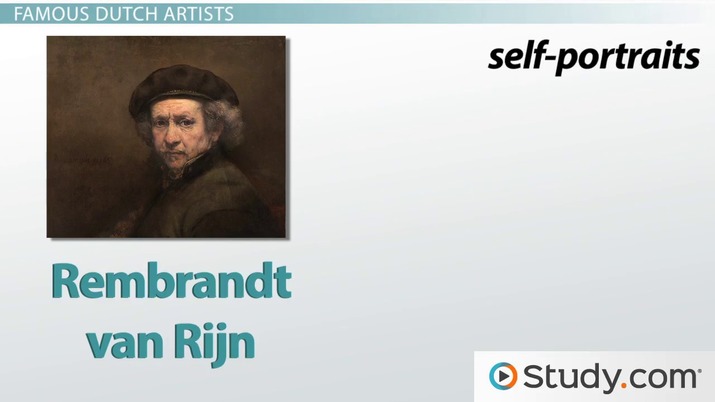 Coming up next: England's Wars of the Roses

These characteristics of the Dutch Republic affected the development of Golden Age art. First off, the art world welcomed a whole new class of patrons. Successful Dutch merchants enjoyed collecting art, and even members of the lower middle class bought paintings. It was not unusual for cobblers, blacksmiths, bakers and butchers to own several pieces of artwork. Second, in the Dutch Republic, most paintings ended up in people's homes. As Calvinists, Dutchmen didn't want art in their churches, but they certainly weren't opposed to displaying it in their houses.

To cater to their new customers, Dutch artists focused on several distinct genres that have come to represent the genius of the Golden Age.

1. The activities of everyday life

Artists painted familiar scenes of home, work and marketplace, but they also tended to include symbols and moral lessons in their pictures. Viewers had fun trying to figure out the artists' messages.

Painters created detailed, realistic depictions of everything from food to flowers.

The Dutch appreciated their environment, and they enjoyed paintings that dramatized maritime scenes, revealed the beauty and harmony of the countryside and depicted both the busyness and the stability of the city.

The members of the prosperous middle class wanted to preserve their likenesses for all time. Artists painted portraits of men, women, children and families, sometimes in elaborate costumes but almost always with expressive faces and meaningful gestures.

Golden Age artists liked to tell stories, and they often turned to history for their subject matter.

Now let's meet a few of the most famous artists of the Golden Age. Rembrandt van Rijn, 1606-1669, has been called one of the greatest painters of the era and maybe even of all time. He is known for his portraits, especially his self-portraits, of which 80 still exist. Rembrandt also painted many biblical scenes, like the Sacrifice of Isaac.

His subjects exhibit great emotion and expressive gestures. They seem like they could jump right off the canvas and tell their story. The artist also liked to play with elements of light and dark. The Storm on the Sea at Galilee shows Rembrandt's concentration on emotion and his interest in the interaction of light and darkness.

Johannes Vermeer, 1632-1675, was a meticulous painter who portrayed scenes of everyday life in minute detail. He also included a depth of symbolism in his work, and he liked to play with optical effects and light. His painting The Love Letter reveals his attention to detail, storytelling ability and realistic depiction of optical perspectives.

Ludolf Backhuysen, 1631-1708, was one of the most prosperous and successful artists of his day. He owned his own gallery, taught many students and focused primarily on maritime paintings. A Storm at Sea shows the tremendous drama captured in his work.

Frans Hals, circa 1582-1666, was well known for portraits. He employed a free style with sweeping brushstrokes that gave his paintings a sense of spontaneity and liveliness. The Gipsy Girl, for instance, looks like she might laugh at any moment, and notice the smirk on the wife's face in Married Couple in a Garden.

Rachel Ruysch, 1664-1750, proves that there was a place for women in Dutch art. She created still life paintings with a high level of detail and accuracy, as we can see in Still Life with Flowers on a Marble Tabletop.

Jacob van Ruisdael, circa 1628-1682, specialized in landscapes. He used strong colors, intricate lighting and forceful brushstrokes to create works filled with drama and energy. The Windmill at Wijk and the Bentheim Castle are only two of his approximately 700 paintings that captured everything from winter scenes and beaches to towns and panoramic countrysides.

In the 17th century, the Netherlands experienced a glorious era of artistic achievement called the Golden Age of Art. After decades of war with Spain ended in a truce in 1609, the new Dutch Republic could finally turn its attention to cultural activities. The Dutch middle class grew wealthy through the country's prosperous trade, and they took an active role in government. There were also Calvinists who preferred simplicity rather than art in their churches.

These middle class Dutchmen became the primary patrons of art in the Golden Age. They purchased art for their homes rather than their churches, and they enjoyed paintings that depicted the activities of everyday life. They also purchased still life paintings, landscapes, cityscapes, seascapes, portraits and historical paintings.

Dutch artists like Rembrandt van Rijn, Johannes Vermeer, Ludolf Backhuysen, Frans Hals, Rachel Ruysch and Jacob van Ruisdael strove to give their patrons what they wanted, while at the same time developing their specialties, perfecting their artistic techniques, cultivating their creativity and basking in the fame and prosperity of the Dutch Golden Age of Art.

At the end of this lesson you should be able to:

The Rise of the Dutch Republic & Their Golden Age: History & Timeline

The Girl with a Pearl Earring by Vermeer: Painting Analysis & Overview

What are the Disciplines of Mathematics?

What is Vocal Music? - Definition & Types

Art as a Form of Communication

Surrealism | Characteristics of Surrealism in Art

What Is Impressionism in Music? - Definition, Characteristics & Timeline