Of the three branches of the government of the French Republic, the executive branch is the most powerful. Review the structure and history of the French government, including overviews of the executive, legislative, and judicial branches. Updated: 11/22/2021
Create an account

From Hammurabi's Code to the constitutions of today, law and government have come a long way. In Hammurabi's time, for example, a king ruled with an iron fist and his word was law. Kings were often seen as gods and if a weak one happened to inherit the throne, he was simply deposed by a stronger man.

Thousands of years later, we would develop complicated government structures with checks and balances, division of labor, and long legal histories that tried to protect the weak as well as the strong. In this lesson, we'll briefly explore the various branches of the government of France. 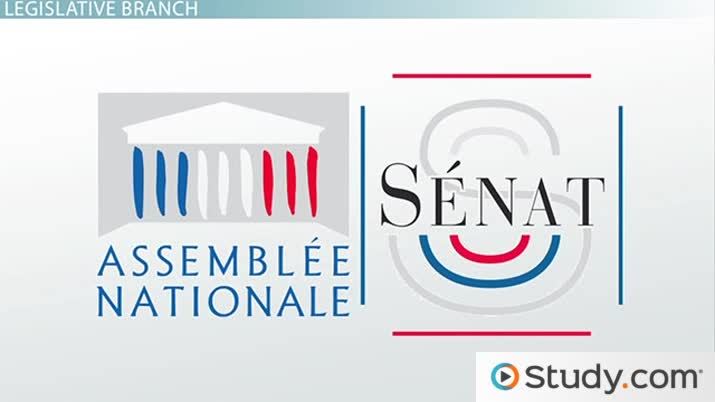 Coming up next: The Constitution of the Fifth Republic: History, Development & Major Aspects

The executive branch of the French Republic is the most powerful branch of government in France and this is usually what someone is referring to when they speak of 'the government.' It is made up of three different parts: the president, the prime minister, and the cabinet. Of these three, the president is the most powerful. This is largely because the 1958 Constitution of the Fifth Republic, which still is the highest law in France, was designed specifically by President Charles de Gaulle to empower the presidency at the expense of the then-tumultuous and unstable French Parliament.

The National Assembly contains 577 members. While most of these represent rough blocks of about 100,000 French citizens, some also represent French territories or overseas dependencies. And 11 members even represent French nationals living abroad. Members of the national assembly serve 5-year terms.

The other half of the legislative branch is the Senate. The Senate is a much smaller house, made up of 348 members. Rather than being directly elected by the French people, senators are elected indirectly by the roughly 150,000 Grand Electors of France, generally important regional figures like parliamentarians or regional counselors. The Senate's main duties are similar to that of the National Assembly's: creating and/or amending laws introduced by its members or the executive branch.

There are various levels of courts which deal with various levels of offenses. For example, the district courts deal only with civil cases under 10,000 euros and minor misdemeanors like drug possession or petty theft. Regional courts deal with higher-grade crimes, while the most heinous - like murder or rape - are dealt with by assize courts, which meet intermittently throughout the year.

The highest court of the judiciary's judicial branch is the Court of Cassation. This court does not hear and decide cases itself, but instead determines that the law is being followed in each case.

The government of France, much like our own, is divided into three branches. Unlike our own, though, the executive branch is far more powerful than the other branches. This is partially due to the writing of the 1958 Constitution of the Fifth Republic, which was designed to empower the presidency at the expense of the Parliament. The executive branch also consists of the prime minister, the president's man in the legislature, and cabinet, who govern the various ministries of the French government.

The French legislative branch is made up of two houses, the National Assembly and the Senate, both of which are primarily preoccupied with creating and amending laws for France. Those laws are administrated by the French judiciary. Its judicial branch decides criminal and civil cases while the administrative branch decides all other legal issues.

The Constitution of the Fifth Republic: History, Development & Major Aspects

The Judicial Branch of the French Republic: Purpose & Powers

The Executive Branch of the Federal Republic of Germany

France Physical Geography & Features | What is the Geography of France?