For thousands of years, there has been a myth about The Great Flood. Learn about how there may be some truth to the Great Flood, as well as what may have caused the flood and the effects that it may have had on humans and their migration. Updated: 08/13/2021
Create an account

The Story of Noah and the Ark

Most of us are familiar with the tale of Noah and the flood. For those of you who aren't, here's a quick recap.

God decides to flood the earth. He warns Noah of the impending flood. God orders Noah to build an ark, providing specific instructions about the dimensions and materials to be used. In the ark, Noah is to gather his family and two of every animal.

Noah does as he is told. He builds the ark, gathers his family and marches all the animals on board two by two. Then, it starts to rain.

God makes it rain for 40 days and 40 nights, flooding the earth. Noah, his family and the animals he gathered are the only survivors.

Noah knew this meant the dove had found land. The waters subsided and the ark landed on a mountain. Noah, his family and the animals left the ark, and God promised never to flood the earth again. And he left us the rainbow as a sign of this covenant.

But what if it's not just a story? 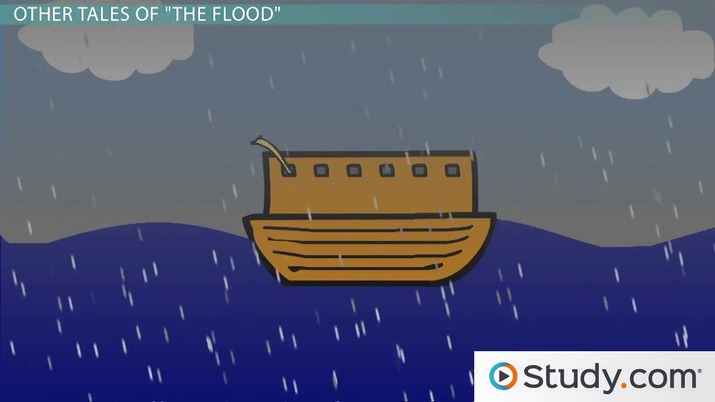 Coming up next: Villages to Cities: How Cities Were Invented

What if I were to tell you that this story shows up across numerous cultures, spaced across much of the world?

We find a similar tale in one of the oldest myths recorded, the Atra-Hasis, a Sumerian myth written on clay tablets more than 1,000 years before the story of Noah, around 1800 BCE.

The myth tells how Atrahasis, the hero of the story, was warned by the God Enki of the Goddess Enlil's plan to flood the earth. In this version, it was not man's wickedness that drove the gods to flood the earth. It was simply an attempt to control the human population, which they thought was growing out of control.

Enki also tells Atrahasis to build an ark, and gives him almost the exact same instructions even down to the materials and dimensions. Atrahasis builds the ark, boards it with his family and a bunch of animals, and survives the flood.

This story is found again in the Babylonian Epic of Gilgamesh, written eight centuries later, also on clay tablets. Here, the similarities to Noah run even deeper. Like before, a god, Ea this time, tells the hero, Utnapishtim, to build a massive ark and bring into it his family and all the animals of the field. The gods then flood the earth to punish humans for their sinful ways. The storm lasts for six days and six nights, and wipes out the rest of the human race.

Like Noah, Utnapishtim gets stuck on a mountain. Like Noah, he releases birds - first a dove, then a sparrow, then a raven. The first two return quickly. When the raven does not return, he knows it is safe to leave the ark. The goddess, Enlil, promises never to flood the earth again and rewards Utnapishtim with eternal life.

Thus, it seems that we've been telling the story of the flood as a species for almost 4,000 years. Most interpret this similarity as evidence that Noah's story is very old and was borrowed from earlier cultures.

This is probably true.

But that does not explain the fact that a great flood is featured in the mythology of almost every ancient culture. The Greek author, Hesiod, wrote of the flood, and it is mentioned in several ancient Hindu texts. Even the distant Mayans had their own, unique flood myths. Now, I can understand Greeks and Indians retelling a story they heard from a Babylonian, but how on earth would the Maya, on the other end of the world, have known the story as well?

That returns us to our earlier question. What if it's not just a story?

What if there actually was a flood some time in our history, but so long ago that the accounts survive only in myth? Some scholars believe they have found such a flood.

Historical Accounts of the Real 'Flood'

When we look back in the geological record, we find that around 8,200 years ago (6400 BCE), global temperatures dropped drastically. Scientists believe this sudden drop in temperature occurred when Lake Agassiz - a vast, prehistoric glacial lake that covered much of North America - finally melted out of the glacial walls that contained it and poured into the world's oceans. Sea levels may have risen by as much as two meters.

Now, imagine you're farming in a fertile basin near the Black Sea. Miles to the west, the Mediterranean has been steadily rising. Suddenly, it tears a hole through the Bosporus and begins pouring into the Black Sea basin. Over the course of a week, the water level rises three meters, submerging millions of acres.

The entire world, as you know it, is suddenly under water. Hundreds of thousands of people who had settled to farm the area would be drowned. Those who survived would need to find new homes.

Studies of languages suggest that around 8,000 years ago, a huge human migration took place. A tide of people poured out of the Black Sea basin in all directions. These people all seem to have spoken a common language at one point, but as they settled across Europe and the Near East, they lost contact with one another and their languages diverged. Today we call the original common language Proto-Indo-European. Almost every European language and all Near Eastern languages are descendants of Proto-Indo-European.

While this common language no longer exists, it lives on in its children. For example, every indo-European language uses the sound ma to refer to mother. Yet, different groups of languages have different sounds for father. We and the Germans make a fa sound, while cultures along the Mediterranean use a pa sound.

Linguists use these differences and similarities to break languages into families. Those that are the most similar, like Spanish and Italian, separated most recently (about 2,000 years ago). Those that are the most different, like Hindi and English, separated much longer ago. By tracing these similarities and divergences, linguists have traced the paths of our ancestors across the Western world, back across space and time, to the Black Sea basin, where the mother of indo-European languages (Proto-Indo-European) was spoken around 6400 BCE.

So, from the perspective of those Proto-Indo-European people farming along the Black Sea, the Great Flood was the greatest catastrophe they had ever known. We can still sense their terror in the myths that survive to this day.

Benefits of the Great Flood

With the benefit of hindsight, the Great Flood may have been the best thing to happen to our species. Without the Great Flood, agriculture, civilization - perhaps even man as we knew him - might have remained a localized affair for a thousand more years, spreading only by small increments as time progressed. Instead, a relatively small group of dedicated agriculturalists was abruptly broken apart and quickly spread around the world. We can still see traces of this flight in the languages we speak today.

With agriculture to support them, these groups of indo-Europeans came to dominate the regions in which they settled. Within a few thousand years, settled agriculture had replaced nomadic hunter gathering from the Strait of Gibraltar to the Himalayas, from the Scottish Highlands to the Nile Valley.

One of these groups of refugee farmers would come to settle in the Fertile Crescent and found the Sumerian civilization. It would be another 3,000 years before the Sumerians developed writing. Yet after all those generations, they still remembered the flood and wrote it down. Giving us the story we still tell our children to this day.