This lesson discusses the background of the Greek God Uranus, or Ouranos. We'll explain his function in the Greek pantheon, as well as his symbolism as the original male.
Create an account

The Myth of Uranus and Gaea

In Greek Mythology, Gaea, or the name for Mother Earth, existed at the beginning of time as a carryover of the Great Goddess religion. In that role, she gave birth to Uranus, the sky and her lover. Each night, Uranus would wrap himself around Gaea and mate with her. As a result, Gaea would occasionally give birth to children. First, there were the six boys and six girls who were called the Titans. This was followed by the Hekatonkheires and the Cyclopes. Uranus hated them all, so he imprisoned them in Tartarus, a prison deep in the earth. There they caused their mother great pain. To ease it, Gaea made a blade of flint and begged her sons to castrate Uranus so that he would have no more power over them. Cronus (also spelled Kronos and Cronos), the youngest Titan, finally agreed to do it. Thereafter, Uranus no longer wrapped himself around Gaea at night; he only stayed in the heavens, and Cronus became the leader of the gods. He brought his siblings up from Tartarus and allowed them to rule with him.

Castration wasn't the end of Uranus' life-giving powers, though. When the blood from his genitals dripped onto the earth, it gave birth to the giants, the Erinyes or furies, and the nymphs. His genitals fell into the ocean and created Aphrodite. 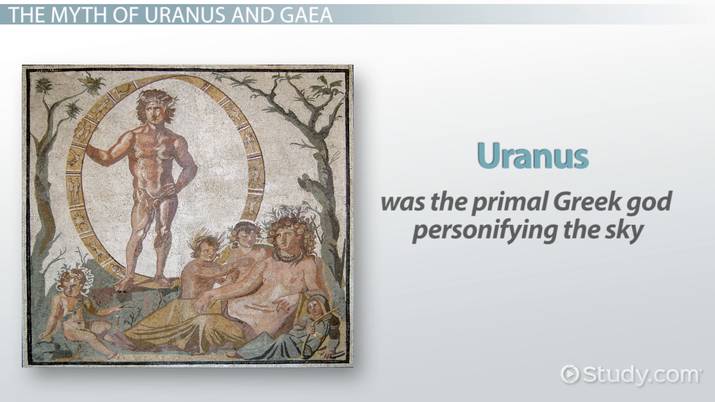 Coming up next: The Greek Parthenon: Facts, History & Construction

After Uranus was castrated, he predicted that his son would likewise be overthrown by his own offspring just as he had been. To keep this from happening, Cronus swallowed all of his children until Rhea, his mate, gave him a rock to swallow in place of Zeus. Zeus grew up, then Zeus gave him poison that made Cronus throw up all of his children at once. When they had emerged again, the gods fought the Titans in a great war. Eventually the gods would defeat them, and Zeus put the Titans in the same prison that Uranus had imprisoned them in, Tartarus. Luckily for Zeus, his father never made the same prediction as Uranus had made, so he never fought a war with his own children.

Uranus as a Symbol

As a Great Goddess, Gaea was a representation of Mother Earth's fertility in giving birth to animals as well as plants. As her male counterpart, Uranus represented male fertility in the same primal way. That is why just the blood from his genitals was capable of creating life. Uranus was believed to be the very essence of what maleness was. That's why his symbol of a circle with an arrow pointing away from it, is the universal symbol for male.

Uranus was the Greek God of the sky and as the mate of Gaea, or the name for Mother Earth, he was responsible for the creation of the first life on Earth. He was the father of the Titans, Cyclopes, furies, nymphs, and Aphrodite, but he despised his young and imprisoned them in Tartarus, a prison deep in the earth. In freeing themselves from that prison, the Titan and Uranus' youngest son, Cronus, would castrate him and grow to rule in his stead, though he would swallow his own children, except for Zeus, who defeated him and took his place as the god of gods. As the first male and the father of all living things, Uranus remained the quintessential male, which is why his symbol has become the universal symbol for male.

Eros the Greek God of Love Facts: Lesson for Kids

Poseidon in The Odyssey

Theseus in Greek Mythology | Who Is Theseus?

Hades the God in Greek Mythology | Who is Hades?

The Greek God Hermes | What is Hermes the God of?