The Gunpowder Treason was a plot devised by Catholics to kill King James I and major English politicians by blowing up Parliament by igniting barrels of gunpowder stashed in the basement. Explore how King Henry VIII's split from the church in Rome and Queen Elizabeth and King James' subsequent persecution of English Catholics inspired the hatching of the treasonist plot. Updated: 10/26/2021
Create an account

Henry VIII Splits from the Church

November 5th is Bonfire Night in England. During this celebration, fireworks fill the sky, and children burn life-sized paper dolls fashioned in the shape of a man. Although this sounds like an odd combination of a college pep rally and the 4th of July, the roots of Bonfire Night are firmly planted in English history, specifically in the Gunpowder Treason. The Gunpowder Treason was a plot by a small band of disenfranchised English Catholics to murder King James I and his entire parliament. Before we uncover the details of this story, we need to understand what brought these English to consider such an act of treason.

The unhappiness of these Catholic Englishmen was a result of years of religious oppression, beginning decades earlier in the reign of King Henry VIII. During the 1530s, Henry VIII's desire to divorce his first wife (in order to marry his second) put him at odds with the church. When the pope refused to allow the divorce, Henry VIII split from the Roman Catholic Church and declared himself head of the new Church of England.

After the death of Henry VIII, the split from the Catholic Church was upheld. Apart from a brief, yet violent, return to Catholicism led by Henry's Catholic daughter, Mary I, the Protestant faith held its place as the official religion of England. 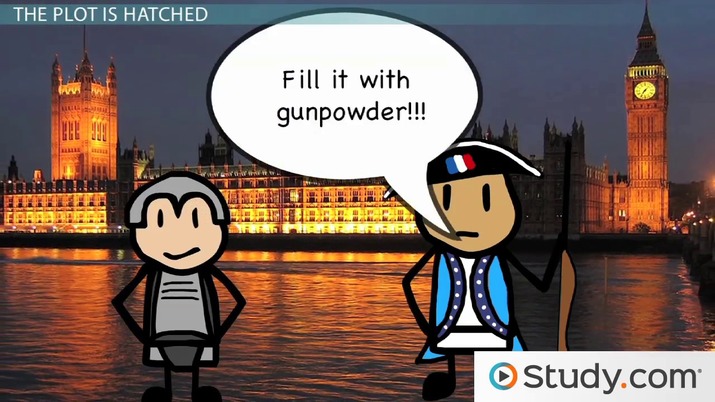 Coming up next: The English Civil War and Failure of Charles' Monarchy

This was solidified under the rule of Henry VIII's other daughter, Elizabeth I. Elizabeth, perhaps more than any other monarch, had great reason to distrust Catholics. To explain, Elizabeth was Henry VIII's daughter through his second wife, Anne Boleyn, whom he married after divorcing his first wife. In the eyes of many Catholics, his divorce and remarriage were completely invalid. Since these Catholics refused to recognize the marriage, they considered Elizabeth illegitimate and unworthy to wear the crown.

Knowing these Catholics were a threat to her throne, Elizabeth embarked on a course of repression and persecution toward her Catholic subjects. In 1559, she passed the Act of Uniformity, which made attendance at Protestant services mandatory. Catholics were forced to abandon their loyalty to the pope and declare their allegiance to the crown of England. Those who didn't were subject to fines, persecution, and even death. Facing such threats, many Catholics outwardly turned to Protestantism but secretly held to their Catholic faith.

Although Elizabeth was successful in keeping Catholic revolt at bay, religious tensions simmered and festered just below the surface of her very long reign. After the death of Elizabeth in 1603, James VI of Scotland was the next in line for the English throne. To him, Elizabeth passed a legacy of religious unrest. When he took the English throne as James I, the country was ripe for religious rebellion. However, his ascension gave hope to the Catholics of England.

Although James was a Protestant, his mother was the very Catholic Mary, Queen of Scots. Making matters even more hopeful for the Catholics, not only was his mom Catholic, she had been executed by the Protestant Elizabeth I. If anyone had reason to be sympathetic to the Catholic cause, it would be James I. Sadly for the Catholics, this was not to be the case. James clung to Protestantism and the policies of his predecessor, Elizabeth. With this, religious tensions bubbled to the surface, and the Gunpowder Treason was born.

The Plot Is Hatched

In 1604, a small group of frustrated Catholics met to hatch a plan of rebellion. Led by Robert Catesby, they conspired to strike the very head of England, King James, and his parliament. By killing the Protestant rulers of England, the conspirators hoped to return Catholicism to the helm.

In a plot that's become like legend to England's children, these angry men began by renting a vault in the ground floor of Westminster Palace. In a move that gave the treason its name, they filled the vault with barrel upon barrel of gunpowder. To get the biggest bang for their buck, (pun completely intended) they chose November 5, the official opening of Parliament, as the day to light the proverbial - and literal - fuse to avenge years of Catholic persecution. All would have gone according to plan, had not one of the conspirators lost his stomach for the planned violence.

The Plot is Foiled

In October 1605, a member of Parliament received an anonymous letter warning him not to attend the opening meeting. Although it's never been proven, many historians believe the turn-coat was most likely a close relative of one of the would-be-victims of Parliament.

Alarmed by such an odd plea, the recipient of the letter brought it to the attention of the royalty. In a smart move, King James decided to wait to act until the eve of Parliament's opening. He believed this would give them the best chance to catch the conspirators.

On November 4th, the king's men swung into action. With precision and purpose, Westminster Palace was turned upside down. When the search led to the basement, the vault of gunpowder was not the only thing uncovered. The search also found Guy Fawkes, the conspirator believed to be in charge of the gunpowder, with matches and torchwood in his hands.

Not ones to take plots of treason lightly, the crown arrested Fawkes and subsequently had him tortured. Although many accounts report he held strong for days, he eventually cracked and supplied the names of his fellow conspirators. What ensued was a nation-wide search for the remaining schemers. They were found in Staffordshire, England. Like their plan, their end was drama-filled. Several died in a full-blown shootout with royal forces. Those who survived were rounded up and put on trial in January 1606.

Not surprisingly, all of them were found guilty of high treason and were sentenced to horrific deaths. They were to be hanged almost to the point of death and then disemboweled. Finally, their bodies were to be chopped into several pieces.

When the gruesome executions were complete, King James had bonfires lit throughout London in celebration. These bonfires became a tradition known as Bonfire Night, which continues to this very day. Each November 5th, Englanders gather to remember the Gunpowder Treason and to celebrate the safety of their king. As part of the festivities, children make paper replicas of Guy Fawkes and then burn them in effigy amidst the bonfires and fireworks. All the while, the crowd rings out England's popular rhyme:

Although the Gunpowder Treason was planned and attempted in the beginning of the 17th century, the tensions that caused it had been brewing for decades among the Catholics of England.

These tensions began when Henry VIII split from the Roman Catholic Church and declared himself the head of the new Protestant Church of England. They continued as his daughter, Elizabeth I, oppressed and persecuted the Catholics within her realm. Although Elizabeth was able to control her kingdom and keep her crown securely intact for many years, Catholic resentment continued to grow.

When James I succeeded Elizabeth to the throne, the Catholic Englanders held hope that he would lift her persecutions from their shoulders. When he did not, the Gunpowder Treason was born.

In an attempt to assassinate both James I and his parliament, less than twenty resentful Catholics filled Westminster Palace with gunpowder and waited for the opening day of Parliament. Due to one of them having a change of heart, the plot was foiled and all the conspirators met their death.

Although the Gunpowder Treason failed, it was a symbol of the religious turmoil of 16th- and 17th-century England. Ironically, November 5th, the fateful day the conspirators had chosen, is now a day of English celebration.

When you finish this lesson, you should be able to:

The Gunpowder Treason: England After Elizabeth I
Related Study Materials

The English Civil War and Failure of Charles' Monarchy

The Marriage of Heaven and Hell by Blake: Summary & Poem Analysis

The Duchess of Malfi by John Webster: Summary, Analysis & Themes