The hypotenuse angle or HA theorem states that if a hypotenuse and acute angle of a right triangle is identical to the angles of another right triangle, the two are congruent. Use a series of examples to learn how to prove, explain, and practice the HA theorem. Updated: 07/08/2022
Create an account

If you're a triangle, finding out that you're congruent to another triangle is a big deal. Imagine finding out one day that you have a twin that you didn't know about. How amazing would that be? It's like having a spare 'you' suddenly enter your life.

In geometry, we try to find triangle twins in any way we can. There are all kinds of methods, like side-side-side, angle-side-angle, side-angle-side and more. In the real world, it doesn't work that way. You can't just compare legs with a stranger to test for congruency.

With two right triangles, we already know that they have something in common - those right angles. So, it's like they're at least cousins. And we can prove they're congruent with the hypotenuse angle theorem. 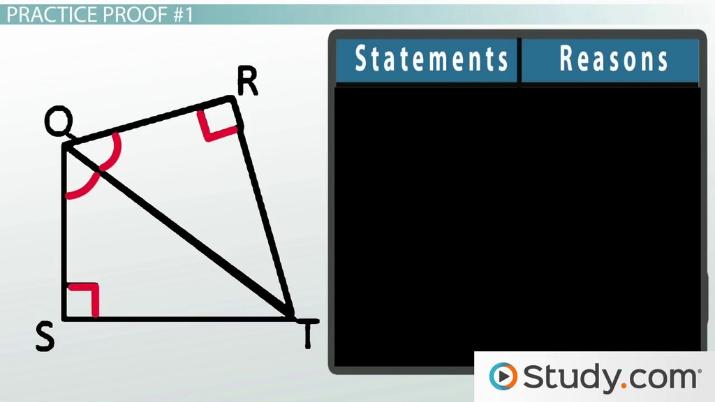 How can we verify congruency with just a hypotenuse and an acute angle? It's like saying two people are twins because they have the same height and hair color. Let's look at a couple of triangles.

So, now we have angle A, side AC and angle C congruent to angle X, side XZ and angle Z. And that's angle-side-angle, or ASA. That means that the HA theorem is really just a simplification or variation of the ASA postulate that works with right triangles.

Let's try to find some twins with some proofs. You know, you're not twins without proof. Here are two triangles:

They're very close. Together, they look kinda like a kite, don't they? Maybe they like to fly kites together. But are they just really good friends, or are they twins?

Let's start our proof by collecting DNA samples from each triangle. Wait, what? Two-dimensional polygons don't have DNA? Oh. Then I guess we'll need to do an ordinary proof. Okay, first, we know that angles R and S are right angles. We're given that. That means that triangles QST and QRT are right triangles. That's the definition of a right triangle.

That enables us to say that RT is congruent to ST due to CPCTC, or corresponding parts of congruent triangles are congruent. And we're done!

How about one more? Here are two triangles that are also close:

How close? They're practically joined at the vertex. Oh, triangle humor.

Anyway, we're given that AC is congruent to CE and that angles B and D are right angles. We want to know if AB is congruent to DE. First, we'll need to determine if the triangles are congruent.

Now it's time to bust out our HA theorem and state that triangles ABD and CDE are congruent. So, they are like conjoined twins! Now we can finish our proof by using CPCTC to state that AB is congruent to DE.

Proofs for Lines, Segments or Rays