Human judgment is influenced by traits, often subtly, such as in the Halo Effect where visual attractiveness affects perception of niceness. Explore these mechanisms, and the opposite effect, the Devil Effect, through examples in school, work, and marketing. Updated: 10/06/2021
Create an account

Kenny is a pretty average guy: he's average looking and makes an average salary. He lives in an average house. When he was in school, he always made average grades.

But Kenny has started to notice something going on in the world around him: people like him, who are average, seem to be average in just about every aspect of their lives. But people who are above average seem to be above average at everything. For example, one woman that Kenny works with is really beautiful. She's also really smart and makes a lot of money. Her life just seems to be charmed.

What's going on? Kenny might have fallen victim to the halo effect, or the fact that a positive belief about one part of a person can influence your opinion of other parts of that person. For example, a really attractive person, like Kenny's coworker, might be seen as really nice, even though she might not be any nicer than anyone else. Likewise, someone who is successful could be assumed to be smart, even if they aren't.

To remember the term 'halo effect,' think about a halo floating over an angel's head: if you see a halo on them, you'll assume that they are infallible. That's the halo effect!

Psychologist Edward Thorndike first wrote about the halo effect. He noticed that people make judgments about others based on their perceptions of only one part of that person and that their judgments aren't really all that accurate. Just like Kenny assuming his coworker is really, really nice because she's beautiful, when in reality she's only sort of nice, the halo effect can blind people to reality.

Let's look closer at some areas where the halo effect can play a role, as well as the opposite of the halo effect, sometimes called the devil effect. 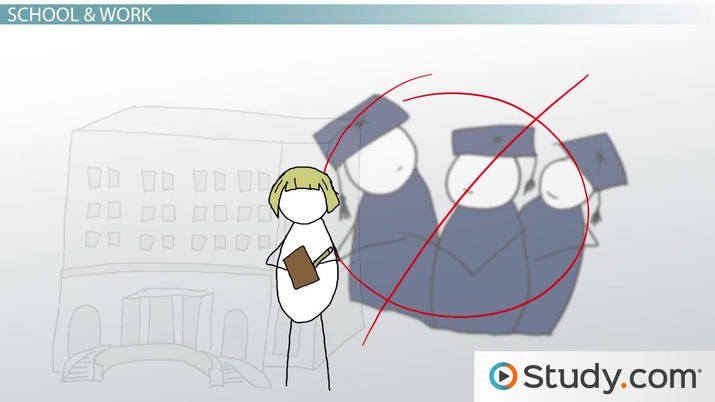 Try it now
Back
Coming up next: How to Disagree with the Group: Examples of Idiosyncrasy Credits

Remember that Kenny is average in most ways, so it makes sense that he made average grades when he was in school. That's not surprising for the many psychologists who have studied the effects of the halo effect on teachers and education.

What they've found is that teachers and other educators are just as susceptible to the halo effect as everyone else. Teachers can be biased for or against students because of the halo effect. For example, a student who has a bad attitude may be really smart and do great work, but the teacher might believe that the student isn't a good student because he is not a well-behaved student.

It doesn't end with graduation, either. The halo effect is at play in the workplace. Numerous studies have shown that people who are more attractive make more money. Remember Kenny's good-looking coworker? Kenny believes that she's really smart because she's good-looking. If her bosses also fall victim to the halo effect, she is likely to make more money than Kenny or other average-looking workers.

You might be wondering: if the halo effect is so prevalent in school and work, where else does it affect my life? Companies can use the halo effect in their marketing. For example, Kenny likes to buy his phone from an electronics company that makes really good phones. The same electronics company makes computers that aren't as great as some of the other brands, but Kenny believes that the computers are better because they are from the company that makes his amazing phone.

Believe it or not, this is relatively common among people. When a company has a great product on the market, positive feelings can leak into the brand's other products. So, just as Kenny believes the company's computer to be great because he loves their phones, people can be convinced to stick with a brand even when it's not the best choice.

Another example of the halo effect occurs with regards to the reputation of a company. For example, if a company has a good reputation in an industry, people are more likely to rank their products higher.

Food and beverage companies are famous for doing blind taste tests, where they give people two products and ask them which one they prefer, without telling them which is which.

For example, another one of Kenny's coworkers is rude. She is short-tempered and berates people who make mistakes. Not only that, but she's impatient with others. Not surprisingly, Kenny thinks that she's not very attractive.

But if her photo and the photo of the nice coworker were given to people who didn't know them, they are likely to be seen as equally attractive. It's the devil effect that makes Kenny think she's not as pretty as she is.

The halo effect is the phenomenon, first noticed by Edward Thorndike, that involves a positive belief about one part of a person that leaks into beliefs about other aspects of that person. It can be seen in schools, the workplace, and in marketing. The opposite effect, known as the devil effect, is when a negative trait can impact opinions about other aspects of a person.