The Hartford Convention of 1814 was a historic moment for the Federalist Party of America. In this lesson, look at the definition, summary, and resolutions of the Hartford Convention, its case of bad timing, its background, the War of 1812, the convention itself, and the reaction that it evoked. Updated: 10/14/2021
Create an account

The Hartford Convention: A Case of Bad Timing

The phrase 'you'll live to regret this' is something most of us might expect to find in an action film, but it happens in real life, too. In American history, there are a great many moments to regret, but for members of the Federalist Party, or the first American political party, particularly those in New England, there was one particularly painful reminder of how one's actions can come back to bite them. The Hartford Convention, held from late 1814 to early 1815, is an example of how good ideas can turn to bad fortune in a blink of an eye. 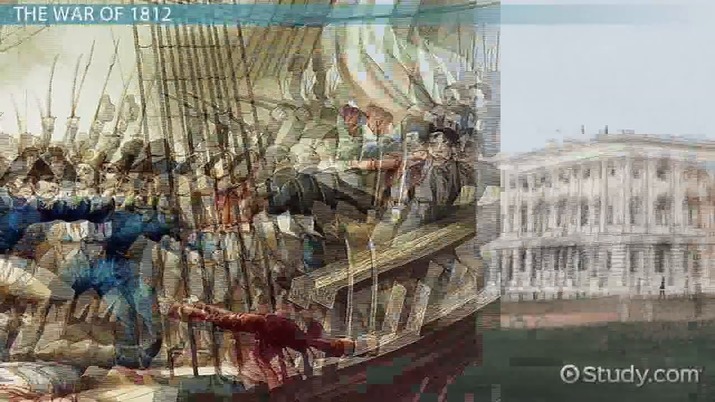 Coming up next: Two Treatises Of Government by Locke: Summary & Explanation

In 1812, the United States embarked on another moment they would probably regret--war with Great Britain. The War of 1812 was a poorly considered, hastily enacted conflict, brought on by clumsy provocations by the British, nationalist attitudes in the U.S., and simmering resentment on both sides left over from the Revolutionary War.

Preceding the war was an odd period in U.S. history, where America did a great deal of transatlantic trade with Britain's traditional enemy, France--all the while engaging in a sort of undeclared war, the Quasi-War, both with England and France. So this was a little complicated--we were shipping goods to Europe, and every now and then those ships would be stopped by English and French navies, searched, sometimes seized, sometimes fired upon.

When Thomas Jefferson became President in 1800, he tried to force Britain and France to knock it off by effectively declaring there would be no trade until the depredations stopped. The Embargo Act of 1807 stopped all transatlantic commerce, and it turned into an extremely unpopular law. Around this same time, it was clear that political divisions in the United States were developing into something the Founding Fathers hadn't anticipated--permanent, enduring organizations, or political parties. These were the Democratic-Republicans of Jefferson and James Madison versus the Federalists, concentrated in New York and New England.

The Federalists were the remnants of the original supporters of the Constitution back during the ratification period of 1787, who had now gathered under the 'anti-Jefferson' banner. There had been a great deal of anger in New England over the Three-Fifths Compromise, a deal struck at the Constitutional Convention that allowed three of every five slaves to be counted towards a state's population, and thus towards representation in the U.S. House of Representatives. The deal itself wasn't the problem, so much as the fear that, with the addition of new territories in the West, slave owning states would be strengthened.

When James Madison, Jefferson's primary ally, became President in 1808, tensions worsened. When he was 'e-elected in 1812, and then signed an even more restrictive embargo than Jefferson had, it seemed catastrophic to Federalists. When the War of 1812 began, there was talk of making a separate peace with the British; there was even talk of secession, declaring an end to the Union and asserting New England's independence.

The War of 1812 got off to a horrible start for the U.S., and only went downhill from there. By mid-1814, British forces had landed outside Washington, D.C., routed the American army there, and burned the White House. British soldiers were advancing in Maine and New York, and it was expected that a naval force was headed for Boston. In short, it looked to most, on both sides, that the war was going to end soon, and badly, for the U.S.

Federalists in New England had been hedging their bets through the course of the war, refusing to send state militia to help in the war effort for fear of British assault while they were away. In response, Madison and the Republicans in Congress refused to reimburse those states for their war expenses. This prompted calls for the Hartford Convention, in December 1814.

The technical reason for the Convention was to propose Constitutional amendments and to arrange for the military defense of the New England states. Delegates arrived from Massachusetts, Rhode Island, New Hampshire, and Vermont.

There were no minutes kept from the convention, and no notes on what was discussed or said. The Convention did issue a report, though, that included a declaration--one which called on the federal government to protect the New England states, to compensate them for their economic losses (both from the war and from the Embargo Act), and proposed a Constitutional amendment which would require a two-thirds vote in Congress for a declaration of war.

The Convention was publicized in January 1815 and officially read into the record of the U.S. Congress on January 5. This turned into a case of bad timing however, as news reached America on December 28, 1814 that a peace treaty has been signed with Great Britain. The Treaty of Ghent ended the War of 1812 and with it, the complaints of the Federalists looked at least like sour grapes, and at most as borderline treason.

If possible, it got even worse. Shortly after the treaty was signed--and even though the war ended with roughly the same conditions as when it started, it was greeted by many Americans as, at a minimum, a moral victory--more news arrived. On January 8, 1815, the Battle of New Orleans ended with a smashing American victory. Even though the battle had been fought after the Treaty of Ghent had been signed, the news struck the U.S. like an earthquake. Andrew Jackson became a national hero, the prevailing view of the war was flipped completely, and now the victory seemed complete and far-reaching.

For the Federalists, though, who had started making noise when the war was going poorly--well, they had just turned out a most spectacularly ill-timed document. Public opinion turned on them, and thanks to their opposition to the War of 1812 , the Federalists were done on the national stage. Though they maintained some regional importance, the term Federalist became synonymous, for many Americans, with treason and secession.

The Federalist Party, embittered by Democratic-Republican electoral victories and the economic policies of Thomas Jefferson and James Madison, came out in opposition to the War of 1812. The Hartford Convention was a meeting of delegates from New England states in which they criticized the war and called for a series of new laws, amendments, and reimbursements.

The report came out shortly after the end of the war was announced; it also followed news of the American victory at the Battle of New Orleans, which ruined the national reputation of the Federalist Party and effectively destroyed them as a national political organization.

The Creation of the Confederacy | Leadership & Goals