The Hawthorne effect describes changes in study participant's behavior in response to being observed by the study conductors. Explore the legacies of the studies of employee productivity from which the Hawthorne effect got its name. Updated: 08/13/2021
Create an account

Meet Tom. He is a young college graduate who was hired at Trekkie Technology about six months ago. Tom is miserable at Trekkie because he cannot stand the people that he works with. Jim is arrogant, Mary is a constant complainer, Sarah spends more time gossiping than working and Tom's boss, Bill, is never around when Tom needs him. Instead of focusing on his job, Tom spends much of his workday distracted, trying to keep his emotions in check so that he does not tell his coworkers what he really thinks of them. Needless to say, Tom avoids these people at all costs, which is relatively easy due to his coworkers' preoccupations with themselves and others keeping them away from their desks.

Meet Jenny. She was in Tom's graduating class but is employed at The Force Technology, a direct competitor of Trekkie Technology. Unlike Tom, Jenny loves her job, especially because of the people she works with. Jenny has always found The Force to be a great place to work because her coworkers and manager are supportive and work together to help each other succeed. Jenny's manager, Irene, considers herself a part of the team and even shares the same workspace as her subordinates. Jenny is able to focus on her work and ask questions when needed and is highly productive as a result. 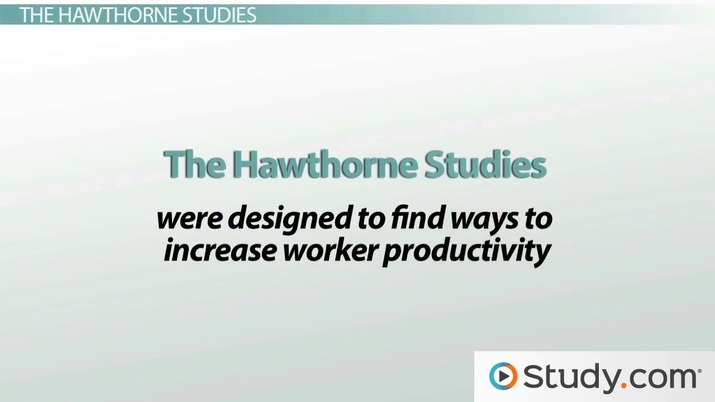 Coming up next: The Needs Theory: Motivating Employees with Maslow's Hierarchy of Needs

The correlation between the social context of a workplace environment and employee productivity can best be understood by examining the Hawthorne effect.

The Hawthorne effect is a psychological phenomenon in which participants in a study may change their behavior or performance in response to being observed by the individual conducting the study.

The term 'Hawthorne effect' was derived from the location where the phenomenon was first witnessed during a series of experiments: Hawthorne, Illinois. What are commonly known as 'the Hawthorne experiments' consisted of two studies conducted at the Western Electric Company's Hawthorne Works, just outside of Chicago, from 1924 to 1932. The Hawthorne studies were designed to find ways to increase worker productivity.

Up until this point, the focus of increasing productivity in workers was based on Frederick Taylor's work in finding the best possible way to perform a task and using financial rewards as incentives to increase employee motivation. The Hawthorne experiments were along those same lines.

The first experiment, conducted by a group of engineers, looked at what effects lighting levels had on employee performance at Western Electric. The results of the study showed that even as lighting levels decreased, employee performance continued to increase - that is, until the workers could no longer see, after which productivity naturally declined. Essentially, the experiment showed that productivity increased as lighting decreased, which was not what the experimenters expected.

The second experiment was conducted a few years later by Elton Mayo and Fritz J. Roethlisberger, who supervised a group of five women in a bank writing room. As part of the experiment, the women were given special privileges such as periodic breaks from work, free lunches and pay increase incentives. This study also resulted in increased employee performance.

This was similar to the first experiment. Workers' productivity increased when lighting decreased because the workers knew they were being watched, not because of the lighting itself.

The conclusion from the Hawthorne studies illustrates the importance of considering the social and human relations needs of workers. Mayo and Roethlisberger's conclusions about productivity increasing when management and coworkers made employees feel valued by showing them additional attention was in sharp contrast to the common perceptions of that time.

Suddenly, financial rewards were found to be much less conducive to worker motivation and productivity. The Hawthorne studies paved the way for behavioral management theory and have significantly shaped the manner in which employee motivation is accounted for in the workplace. The Hawthorne effect can explain how the more attention an employee receives from managers, coworkers and customers, the higher the level of effort and employee productivity. Essentially, productivity increases when employees think that they are being watched or observed closely.

If we go back to our example of Tom, his manager was never around when Tom needed him, and his coworkers were more interested in themselves or gathering the latest gossip on others. This allowed for Tom's productivity to decline. However, Jenny's work environment was much different in that she worked closely with her coworkers and manager, a factor that Jenny felt increased her level of productivity. Because Jenny worked collaboratively with her coworkers and manager and knew they were aware of her actions, she felt a sense of teamwork and desire to be productive with others watching.

The legacy of the Hawthorne studies lives on as we continue to regard social and human relations as crucial aspects of business management.

Let's review. The Hawthorne effect is a psychological phenomenon in which participants in studies change their behavior or performance in response to being observed by the individual conducting the study. The term 'Hawthorne effect' was derived from the location where the phenomenon was first witnessed during a series of experiments designed to find ways to increase worker productivity. The Hawthorne experiments consisted of two studies: one on lighting levels at Western Electric Company's Hawthorne Works and the other on offering special privileges to five bank workers.

What was not blatantly obvious at the time soon became a staple of behavioral management theory. That is, it is important to consider the social and human relations needs of workers. In the workplace today, the Hawthorne effect can explain how the more attention an employee receives from managers, coworkers and customers, the higher the level of effort and employee productivity. Essentially, productivity increases when employees think that they are being watched or observed closely.

The Human Relations Movement: Definition and Significance to Organizational Behavior

The Authoritarian or Autocratic Leader