View bio
The Holocaust was the persecution and mass murder of as many as 11 million people by Adolf Hitler and the Nazis between 1933 and 1945. Learn about the people they targeted, the progression of events leading up to the Final Solution and the end of the genocide in this lesson. Updated: 08/03/2021
Create an account

Targets of the Holocaust

The term Holocaust typically refers to the persecution and mass murder of as many as 11 million people by the Nazis, or German fascists, between 1933 and 1945. Though history cannot hold just one person responsible for all of the atrocities carried out, the Holocaust corresponds with the political rise of one man: Adolf Hitler. He became Chancellor of Germany on January 30, 1933. By the middle of the next year, he was dictator with the title of Fuhrer.

Hitler had started cleansing, what he called, ''the master race'' almost as soon as he took office. In addition to the nearly six million Jews he targeted, there were more than five million non-Jewish victims as well. The Nazi regime tried to eliminate anyone who might pose a political threat, including communists, journalists and various Christians who opposed Hitler, those they believed would dilute the Aryan gene pool, such as Romani people, Jews, Black people, individuals with disabilities, incarcerated people, and others who were perceived by the Nazi government as a drain on the economy, in addition to groups they just didn't like, such as LGBTQ people.

Depending on the offense, people might find themselves subject to heavy labor, forced abortions and sterilization. They were very likely to have their assets stolen and then be imprisoned in a concentration camp anywhere in the Third German Empire, or Third Reich, where they were often executed or worked to death. The exact number of camps varies, depending on the definition, but there were dozens of main camps, many with sub-units, serving different functions. Current estimates total about 20,000 camps. 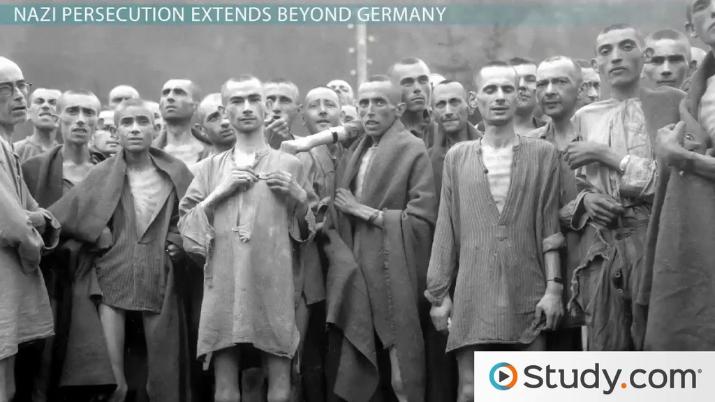 Coming up next: The Pacific Ocean Theater of WWII: Japan vs. The Allies

Since at least the end of WWI, Hitler had specifically blamed Jews for his nation's problems. Antisemitism wasn't a new phenomenon in Europe, but the Nazis ramped up the prejudice to a murderous level. First, Jews were identified by voluntary registration, other research, like census and immigration records and synagogue membership, and through informants who were paid bounties. Then, beginning in 1933, a series of increasingly strict laws stripped away Jewish rights, including land ownership. They were barred from many professions like law, medicine, journalism and the military. By 1935, they had lost their citizenship, and even more personal, business and property restrictions and regulations were enacted in the coming years.

The Night of Broken Glass, or Kristallnacht, in November 1938 marked a turning point in Jewish persecution. As retribution for the murder of a German embassy employee in Paris by a German-born Jewish student, more than 9,000 Jewish-owned businesses, homes and synagogues were destroyed or vandalized. As many as 91 Jewish men were murdered, and upwards of 30,000 were arrested and sent to concentration camps. Within days, the German government eliminated Jews from the economy, most remaining Jewish-owned property was seized and Jewish children were expelled from public schools. The Jewish community as a whole was also fined one billion marks to pay for the damage of Kristallnacht.

After invading Poland in 1939, Hitler ordered the separation of citizens the Nazis considered to be ''undesirable'' from the rest of the population. Hundreds of thousands of Jews were relocated into ghettos located near railroad lines. Within months, Polish Jews became enslaved and had to wear a white Star of David on their arms. Eventually, Jews throughout the Reich were required to wear the recognizable yellow Star of David on their chests.

But as the Nazis conquered more and more territory, they encountered more and more people that they believed to be ''sub-humans,'' including Allied POWs who fit their description. Germany began deporting Jews to concentration camps. Those who were allowed to remain at home for the time being became slave labor in the war industries. In newly occupied lands, the Nazis thought the easiest solution was to simply kill as many Jews as possible on the spot, or pay local citizens to do it for them, but many others were sent to camps. Meanwhile, Hitler's allies began to start their own cleansing programs.

Auschwitz and Other Death Camps

By the summer of 1941, the Fuhrer ordered the systematic extermination of all Jewish people in Europe. Called the Final Solution, this genocide program began at Auschwitz, but ultimately included six death camps, all in Poland, specially equipped for mass murder. European Jews, plus some others considered ''undesirable,'' were typically deported by freight and cattle cars, packed shoulder to shoulder for days without room to sit, without protection from weather and without food, water or bathroom facilities. Those who survived the train ride were separated upon arrival.

Useful prisoners were tattooed with a number, stripped of their clothes and belongings, shaved and hosed down. They were often allowed to live as long as they were productive workers for the German war machine. Those who weren't useful enough were killed immediately, including almost all children and older adults. A number of execution methods were tested, but by January of 1942, Zyklon-B gas became the preferred method. The earliest victims were buried in mass graves, but cremation soon became the only sustainable option.

There are very few known cases of resistance or rebellion in the camps or even the ghettos, and the Nazis suppressed all uprisings successfully. However, a few individuals did manage to escape to safety.

Besides being starved, terrorized, brutalized and worked to death, the masses of defenseless prisoners were viewed by Nazi doctors as lab rats—perfect for carrying out human trials on a variety of medical experiments beginning in 1942. Most fell into three categories. Some doctors worked to increase the survival rate of soldiers at the front. For example, they deliberately inflicted and then tested various treatments for diseases, poisons, frostbite, hypothermia and battle wounds, including amputations and transplants. Other doctors explored the most efficient ways to exterminate all the people they viewed as ''sub-human,'' such as sterilization and execution techniques.

Finally, some doctors tried to benefit the Aryan race, including artificial insemination and the infamous experimentation on twin children, looking for ways to predictably breed multiple, perfect specimens of what they considered to be ''the master race.'' Though twins had some of the best living conditions in Auschwitz, nearly all of them were killed when the tests were finished. There was other research, too. One lab successfully developed a method for making soap from human fat, while one failed to change eye color and another failed to make sea water safe to drink.

The End of the Holocaust

Over the next two years, the death camps were continually expanded, but following D-Day, the Allied invasion of Northern France on June 6, 1944, the camps increased the executions to a record daily high of 9,000 at Auschwitz—faster than they could dispose of the bodies. After the Soviet army liberated the first camp in July, the Nazis started eliminating as much evidence as possible, destroying camps and moving the prisoners as the Allies closed in. By the time Auschwitz was discovered in January 1945, up to two million people had been murdered there. The first camp to be liberated by American troops was Buchenwald in April 1945.

Later that month, on April 30, 1945, Adolf Hitler committed suicide. Germany surrendered a week later. The war in Europe and the Holocaust were finally over.

The Holocaust, between 1933 and 1945, was the murder of 11 million people at the hands of Hitler's regime in Nazi Germany. Five million ''undesirable'' people and six million Jews were systematically stripped of their rights and property, imprisoned and often killed. The Final Solution attempted to exterminate all Jewish people in death camps, such as Auschwitz. Before their deaths, many prisoners were used as slave labor or as unwilling subjects in medical experiments. The Holocaust ended with Germany's surrender at the end of World War II in May 1945.

After finishing this video lesson, you could be able to discuss the Holocaust in Nazi Germany during World War II and Adolf Hitler's attempt at a ''final solution'' for cleansing what he called the ''master race'' of what he perceived as ''undesirables.'' You should have the ability to discuss the death camps, including Auschwitz, and the many atrocities inflicted upon Jews, Christians, communists and other people.

Prompts About the Holocaust:

Provide the definitions of Holocaust and Final Solution. Each definition should be at least two sentences long and should include specific information.

Example: The Holocaust refers to Hitler's systematic killing of at least 11 million people between 1933 and 1945.

Make a list of at least eight categories of people targeted by the Nazis for extermination. Obviously, Jews are the first to come to mind, but try to recall other groups that were mentioned in the lesson.

Make a timeline that shows the major events of the Holocaust from 1933 to 1945.

Example: The Final Solution began in 1941.

In about three to four paragraphs, write an essay that describes the phenomenon of Anti-Semitism in Germany and how it rose to unprecedented levels in Nazi Germany.

Example: Hitler began taking away the rights of Jews.

In approximately one page, write an essay that details how people were treated in the concentration camps.

Example: Cruel medical experiments were conducted in the camps during the Holocaust.

Write an essay of at least three to four paragraphs that explains how the Holocaust came to an end.

Example: The Soviet army started liberating people from the concentration camps in July of 1944, after the D-Day Invasion.

The Attack on Pearl Harbor: The Beginning of American Involvement in World War II

The Pacific Ocean Theater of WWII: Japan vs. The Allies

Hiroshima and Nagasaki: How the Atomic Bomb Changed Warfare During WWII

World War II: The Start of the Second World War

The Election of Ronald Reagan in 1980: A Reemergence of Economic & Political Conservatism

The United States During WWII: The Home Front